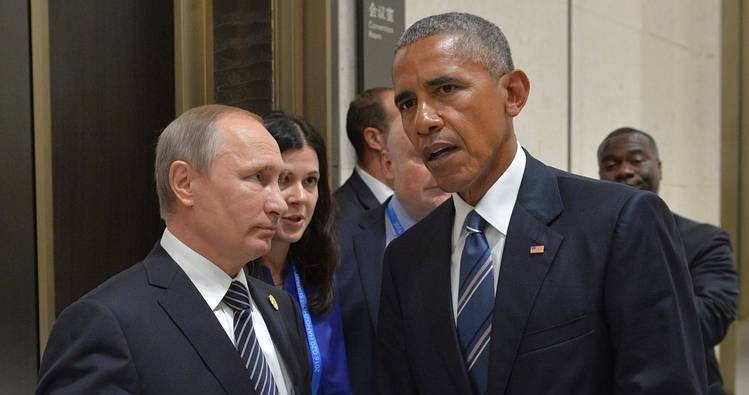 US officials have continued to declare progress with Russia on how to achieve temporary ceasefires in Syria, despite Moscow’s continued intensive bombing of opposition areas.

Washington had hoped to declare an agreement over the weekend, with President Obama and Secretary of State John Kerry meeting Russian President Vladimir Putin and Foreign Minister Sergei Lavrov. The arrangements reportedly would have included 48-hour truces to allow aid into parts of Aleppo city and sharing of intelligence for airstrikes on the Islamic State and the jihadists of Jabhat Fatah al-Sham (formerly Jabhat al-Nusra).

However, as a pro-Assad offensive — supported by intense Russian bombing — regained important territory near Aleppo and re-imposed a siege on opposition areas, Moscow pulled back from completion of the deal.

See Syria Feature: Russia Steps Back from Ceasefire Deal as It Bombs for Assad’s Recovery Near Aleppo

Toner said that Kerry and Lavrov are expected to meet “very soon” but that he could not announce a time or place. He added:

The UN said on Wednesday that about 100,000 people have been displaced in the last 10 days by recent fighting in northern Hama Province, citing the Syrian Arab Red Crescent and the provincial governor for the estimate.

Rebels launched an offensive on August 29 that has taken a series of towns and villages across a wide front, moving within 10 km (6 miles) of Hama city.

Many of the displaced are sleeping outdoors, while four mosques in Hama city and 12 schools in rural areas are temporarily housing people.

The Turkish daily Daily Sabah, close to President Recep Tayyip Erdoğan’s office, has signalled that the Turkish-rebel offensive will move on the ISIS-held town of al-Bab in Aleppo Province.

Since it began on August 24, the offensive has cleared the Islamic State from a 55-km (34-mile) corridor between al-Rai and Jarablus on the Turkish-Syrian border. It has also moved south to take territory from both ISIS and the Kurdish-led Syrian Democratic Forces.

Observers have speculated that there could be a race between the Turkish-rebel force, the Kurdish militia YPG, and even pro-Assad forces to capture al-Bab — ISIS’s main position in Aleppo Province after it lost the city of Manbij to the SDF in July. The town is about 30 km (19 miles) south of al-Rai.

Late Tuesday, the Free Syrian Army declared a military zone to the north and east of al-Bab.

Daily Sabah presented the urgency of checking a unified Kurdish territory led by the Kurdish Democratic Union Party (PYD) militia — Ankara concerns the groups as part of the Turkish Kurdish insurgency PKK: “Once the PKK’s Syrian offshoot, the Democratic Union Party (PYD) seizes al-Bab, it will be able to connect its cantons from the West and the East and reach the Mediterranean.”

The newspaper added, “It remains to be seen what kind of an action the US will take regarding the clashes between the FSA and the YPG.” 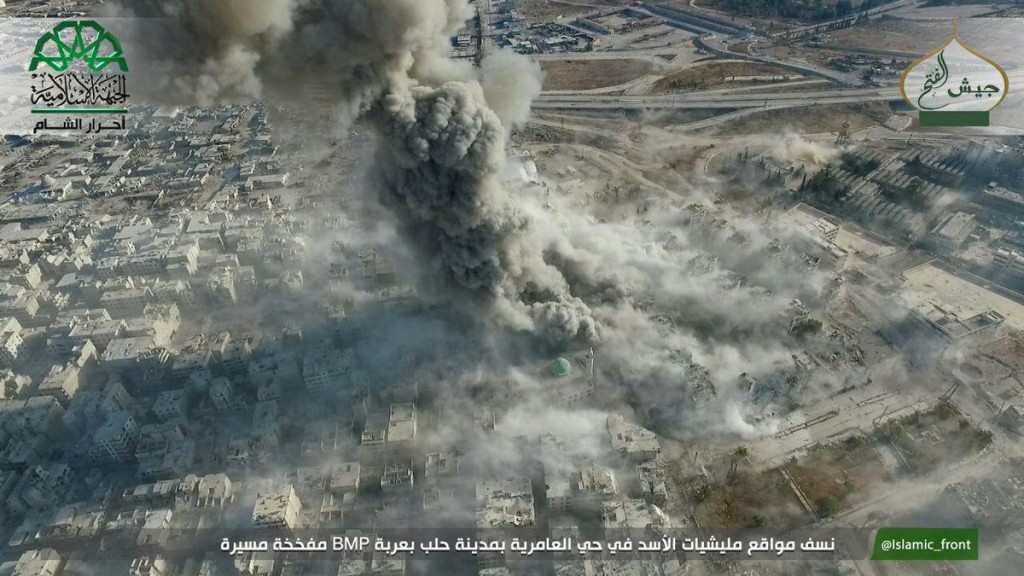 Returning from the G20 summit in China, Erdoğan said the offensive could even strike at the Islamic State’s center in Syria, the city of Raqqa, if the US ensured cooperation:

Raqqa is an important center for Daesh. Obama particularly wants to do something together about Raqqa. We have told him that this is not a problem for us….

The opposition-rebel High Negotiations Committee will present a proposal for transition at a meeting in London on Wednesday.

The 25-page plan, declaring a commitment to democratic and religious pluralism, will be presented to foreign ministers from the US, European Union, Turkey, and Gulf States.

The proposal envisages “a political system that protects freedoms, safeguards individual rights, and that is founded upon the principles of liberty, equality, citizenship, and justice”. A six-month negotiating process would lead to a single transitional governing body, followed within a year by Presidential, Parliamentary, and municipal elections.

State officials would remain in their posts, while a joint military council under its authority will include representatives from the rebels and those in the Assad military “who have not stained their hands with Syrian blood”.

The documents promises all Syrian groups will be represented “without discrimination or exclusion based on religion, sect, ethnicity, or class” in one homeland “where women can enjoy their full public and individual rights and are ensured constitutionally protected active contribution in all state institutions and decision-making bodies and positions by at least a 30% quota”.

We are saying, let the Syrian people decide their own fate. Their own future without intervention. Don’t make preconditions who will rule Syria.

Meanwhile, rebel factions in northern Syria are discussing a merger, spurred by recent losses to the regime and its foreign allies near Aleppo.

Claims are circulating that the head of the new force and “Foreign Minister” would be from leading Islamist faction Ahrar al-Sham. The “Defense Minister” will come from Jabhat Fatah al-Sham — the reconfigured Jabhat al-Nusra, which formally renounced allegiance to Al-Qa’eda in July. Other Ministers will come from the Free Syrian Army.

Pro-Assad forces have secured their recent gains of territory near Aleppo, which re-imposed a siege on opposition areas of the city.

On Sunday, the Syrian military and foreign allies, enabled by Russian airstrikes, recaptured a large artillery base southwest of Aleppo. The occupation renewed a siege of opposition areas of the city, broken by the rebel takeover of the base in early August.

A rebel attack on the nearby district of Amiriya, beginning with a large vehicle bomb, appeared to have been checked yesterday.

Meanwhile, further pro-Assad advances were reported at Qarassi and at Mushrifah and nearby quarries.

Rebels said that they continue to hold most of the 1070 housing complex near the artillery base. 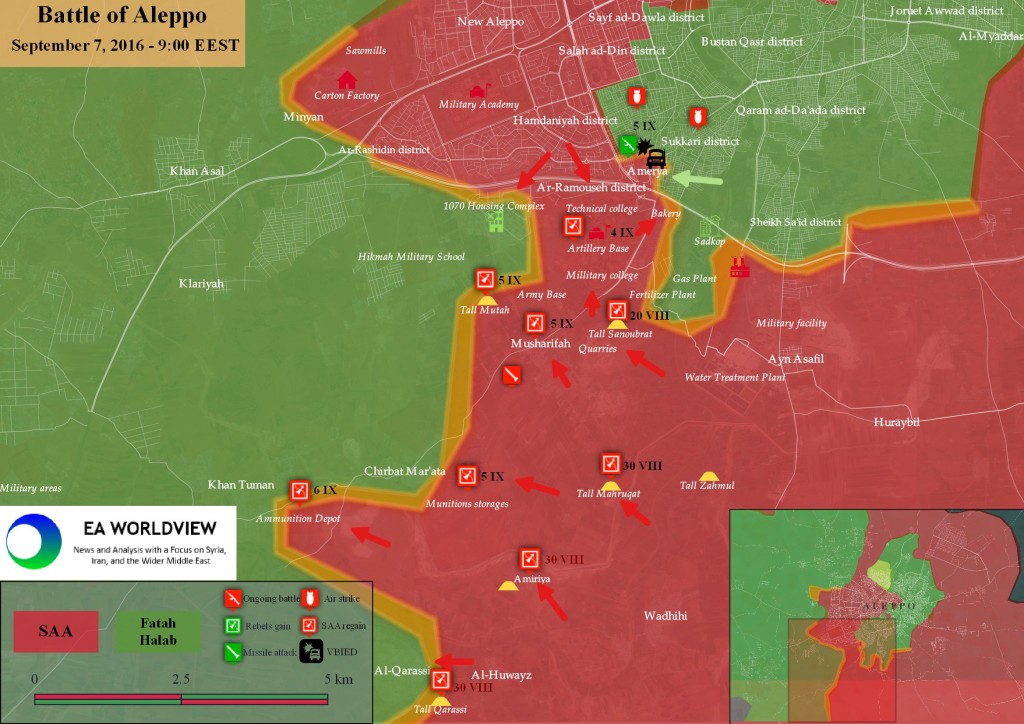