Syria Daily: Russia Accused of War Crimes as Another 85 Killed in Aleppo 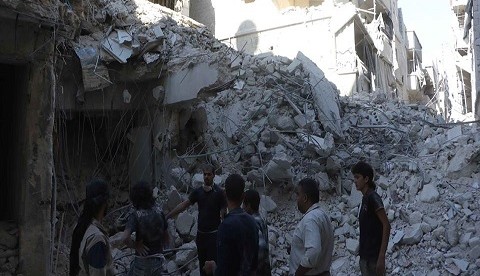 PHOTO: Damage from Russian-regime bombing of Aleppo on Sunday

UPDATE 1730 GMT: Another 60 airstrikes have been reported on opposition-held areas of Aleppo city today, with those hospitals remaining after Russian-regime attacks filled to overflowing with patients:

Hospitals in #Aleppo suffer lack of medical equipment while the number of the injured increases#Syria #Orient pic.twitter.com/uNPwbxakiH

It didn’t just last a few seconds, but was followed by a strong shake and the sounds of rocks falling everywhere. The sound was terrible, it was as if the ground was shaking or there was an earthquake.

The Russian and the Israelis and even the Americans allowed the [Assad] regime to seemingly exterminate eastern Aleppo and experimenting with new weapons on us.

We have become a weapons testing site and the whole world is watching in silence. No one is doing anything to stop these criminals.

However, Kremlin spokesman Dmitri Peskov maintained today that the allegation of Russian “barbarism”, leveled by US Ambassador Samantha Power at the UN Security Council, was not appropriate: “We note the overall unacceptable tone and rhetoric of the representatives of the United Kingdom and the United States, which can damage and harm our relations.”

Peskov said that, while a recent ceasefire in Syria had “little effect”, Moscow was “not losing the hope and political will to use maximum efforts to reach the point of political settlement in Syria”.

“So far it’s been hard,” he added, claiming that “terrorists are using the cease-fire regime to regroup, to replenish their arsenals and for obvious preparations to carry out attacks”.

ORIGINAL ENTRY: Russia has been accused of war crimes in the UN Security Council, as another 92 people were killed amid Russian-regime bombing of Syria’s largest city Aleppo on Sunday.

The Local Coordination Committees documented the deaths, which included dozens of children and women. Since Thursday, the resurgent bombing has killed about 350 people in and near Aleppo.

Russia and the Assad regime renewed the attacks as soon as the Syrian military declared an end to a brief US-Russian ceasefire on Monday, beginning with an assault on a UN aid convoy west of Aleppo.

In an emergency UN Security Council session on the bombing and siege, the US, British, and French Ambassadors all pointed at Russia’s use of bunker-busting and incendiary bombs

What Russia is sponsoring and doing is not counter-terrorism. It is barbarism.

History will not look kindly on security council members who stay silent in the face of this carnage.

She highlighted the targeting of three out of four White Helmets rescue centers in eastern Aleppo city: “Those buried in rubble in Aleppo are much more likely to die in the rubble”.

Bunker-busting bombs, more suited to destroying military installations, are now destroying homes, decimating bomb shelters, crippling, maiming, killing dozens, if not hundreds. “Incendiary munitions, indiscriminate in their reach, are being dropped on to civilian areas so that, yet again, Aleppo is burning. And to cap it all, water supplies, so vital to millions, are now being targeted, depriving water to those most in need.

In short, it is difficult to deny that Russia is partnering with the Syrian regime to carry out war crimes.

French Ambassador François Delattre compared the assault to the Serbian attacks on the civilians of Srebrnica in 1994 and the German bombing of the Spanish city of Guernica in 1937: “These crimes must not go unpunished”.

He said that if nothing was done to stop the assault, “this week will go down in history as the one in which diplomacy failed and barbarism triumphed”.

Russian Ambassador Vitaly Churkin tried to shift the blame to rebels, insisting that they were stopping civilians from leaving and using them as human shields.

He praised the Assad regime for its “admirable restraint”: “The Syrian regime only uses air power to get terrorists out of the city with minimal civilian casualties.”

However, Churkin’s statement was undermined by UN envoy Staffan de Mistura, who said the ceasefire was broken “when five [opposition] districts were hit reportedly with five severe airstrikes”:

Since that fateful day, we have seen the situation in eastern Aleppo deteriorate to new heights of horror….

We heard the word “unprecedented” – in quantity and also in scale and type – in [descriptions of] the types of bombing. We have seen reports, videos and pictures of reported use of incendiary bombs that create fireballs of such intensity that they light up the pitch darkness in eastern Aleppo, as though it was actually daylight. We now hear of bunker-busting bombs being used and see pictures of large craters in the earth much larger than in previous aerial bombings.

The Assad regime’s ambassador, Bashar al-Ja’afari tried another tactic, declaring that rebels will stage chemical attacks and blame them on the regime. He said the rebels would do this by disguising themselves in Syrian Army uniforms.

The spokesman for the Ahrar al-Sham rebel faction warned that al-Ja’afari could be setting up the pretext to cover up the regime’s next use of chemical weapons:

#Assad #Regime has just provided his alibi at the #UNSC for using chemical weapons against civilians.#Aleppo#Syria#ahraralsham

A half-hour video hails Akram al-Ka’abi, the founder of the pro-Assad Iraqi militia Harakat al-Nujaba, as he arrives at International Airport and then inspects fighters in Aleppo Province:

Iranian-commander Iraqi militia, along with Hezbollah and other foreign militia, have been instrumental in maintaining regime lines and advancing against rebels near Aleppo.

Video: Another Group of Rebels and Families Leave Besieged al-Wa’er

Another group of 100 rebels, along with their families, have left the besieged district of al-Wa’er in Homs city:

Around 100 #FSA fighters, and their families left #alwaer #Homs towards northern countryside of #AddarAlKabira, 4th batch so far pic.twitter.com/eEBUu4URoB

The rebels are gradually being transferred to Idlib Province in northwest Syria after months of negotiations between the opposition council and the Syria military which has cut off supplies and bombarded al-Wa’er — home to at least 50,000 residents — despite a December 2015 truce.

Footage of the rebel offensive over the weekend that captured the fortified village of Ma’an on Saturday:

Rebels took a series of towns and villages in northern Hama Province at the end of August, but had been checked until the weekend by Ma’an’s fortifications and the short-lived US-Russian ceasefire.

The Assad regime has finally allowed aid to reach besieged Madaya and Zabadani in Damascus Province.

The UN and Red Crescent brought in assistance over the weekend, after the regime held out for almost four months. At the same time, food and supplies were sent into the regime enclaves of al-Fu’ah and Kafraya in Idlib Province in northwest Syria.

However, journalist Emma Beals reports that the delivery to Madaya was incomplete:

Apparently aid to #Madaya was missing meningitis treatments for the current outbreak despite prior SARC assessment, and a lack of baby milk https://t.co/YG5ppr2kDv

Zabadani and Madaya have been surrounded by the Syrian military and Hezbollah after a pro-Assad offensive in July 2015. In January, the regime finally relented and allowed a few deliveries into Madaya, responding to international attention to the deaths of scores of residents from starvation and lack of medical care.

The UN’s head of humanitarian operations, Jan Egeland, used the news to call on Russia and the regime to lift the siege of opposition-held east Aleppo.

We could not reach Madaya and 4 towns for 150 days. That changed last night. Now we need ceasefire in and access to devastated East Aleppo https://t.co/GHkDXVfOEC