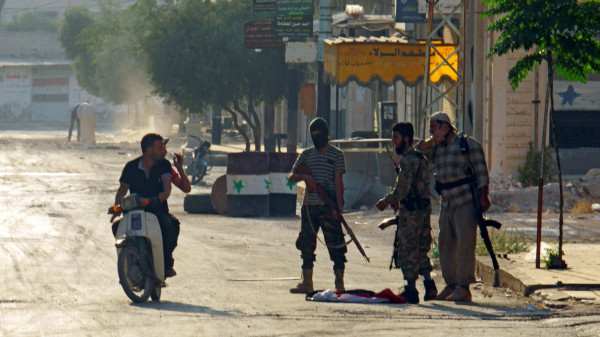 PHOTO: Rebel fighters in the town of Taibat al-Imam in Hama Province

UPDATE 1930 GMT: Russia has been accused of war crimes in an emergency UN Security Council session on the bombing and siege of Aleppo.

The US, British, and French Ambassadors all pointed at Russia’s use of bunker-busting and incendiary bombs among aerial attacks that have struck a UN aid convoy and killed hundreds of civilians since the Syrian military announced an end to the US-Russian ceasefire last Monday.

What Russia is sponsoring and doing is not counter-terrorism. It is barbarism.

History will not look kindly on security council members who stay silent in the face of this carnage.

She highlighted the targeting of three out of four White Helmets rescue centers in eastern Aleppo city: “Those buried in rubble in Aleppo are much more likely to die in the rubble”.

Bunker-busting bombs, more suited to destroying military installations, are now destroying homes, decimating bomb shelters, crippling, maiming, killing dozens, if not hundreds. “Incendiary munitions, indiscriminate in their reach, are being dropped on to civilian areas so that, yet again, Aleppo is burning. And to cap it all, water supplies, so vital to millions, are now being targeted, depriving water to those most in need.

In short, it is difficult to deny that Russia is partnering with the Syrian regime to carry out war crimes.

French Ambassador François Delattre compared the assault to the Serbian attacks on the civilians of Srebrnica in 1994 and the German bombing of the Spanish city of Guernica in 1937: “These crimes must not go unpunished”.

He said that if nothing was done to stop the assault, “this week will go down in history as the one in which diplomacy failed and barbarism triumphed”.

Russian Ambassador Vitaly Churkin tried to shift the blame to rebels, insisting that they were stopping civilians from leaving and using them as human shields.

He praised the Assad regime for its “admirable restraint”: “The Syrian regime only uses air power to get terrorists out of the city with minimal civilian casualties.”

However, Churkin’s statement was undermined by UN envoy Staffan de Mistura, who said the ceasefire was broken “when five [opposition] districts were hit reportedly with five severe airstrikes”:

Since that fateful day, we have seen the situation in eastern Aleppo deteriorate to new heights of horror….

We heard the word “unprecedented” – in quantity and also in scale and type – in [descriptions of] the types of bombing. We have seen reports, videos and pictures of reported use of incendiary bombs that create fireballs of such intensity that they light up the pitch darkness in eastern Aleppo, as though it was actually daylight. We now hear of bunker-busting bombs being used and see pictures of large craters in the earth much larger than in previous aerial bombings.

The Assad regime’s ambassador, Bashar al-Ja’afari tried another tactic, declaring that rebels will stage chemical attacks and blame them on the regime. He said the rebels would do this by disguising themselves in Syrian Army uniforms.

UPDATE 1900 GMT: The pro-opposition Radio Hara reports that more than 70 people have been killed in opposition-held eastern Aleppo city on Sunday. 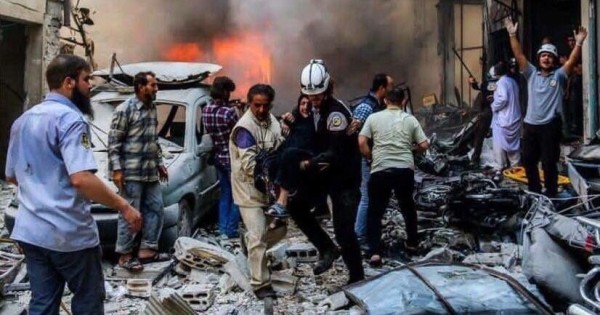 Rebels captured the important village of Ma’an in their offensive in northern Hama Province, in a surprise attack that quickly overran the heavily-fortified area.

Rebels and the jihadists of Jund al-Aqsa moved into a series of towns and villages at the end of August, closing within 10 km (6 miles) of Hama city. However, the offensive was then checked — by the fortifications of Ma’an, by Russian and regime airstrikes, and by the brief ceasefire promoted by the US and Russia.

Pro-opposition activists and rebels claimed that up to seven regime tanks near Ma’an were captured or destroyed during the advance. 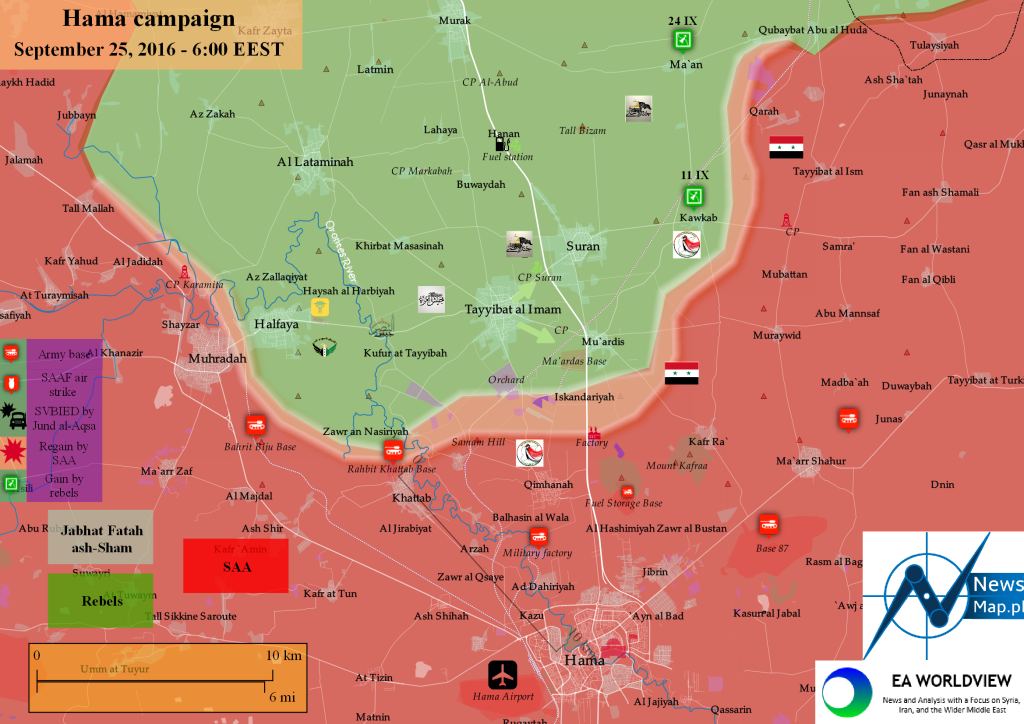 The news from Hama overtook that of an apparent setback for rebels north of Aleppo city, with pro-Assad forces finally taking the Handarat camp after months of air and ground attacks.

Handarat is near the al-Castello Road, the main route into opposition areas of Aleppo, which was seized by the Syrian military and its allies in late July. Its capture would tighten the siege that is threatening an estimated 250,000 residents in the opposition districts.

However, by Saturday evening rebels and thair supporters were claiming that the camp had been regained. An activist embedded with the pro-Assad Palestinian force Liwa al-Quds confirmed the withdrawal.

A pro-regime site also acknowledged the withdrawal, but claims that Liwa al-Quds — “backed by the Syrian Arab Army” — launched a new assault on Sunday morning.

Footage of rebels regaining the camp:

The Local Coordination Committees documented the deaths of 106 people in Aleppo Province on Sunday amid near-constant Russian and regime airstrikes.

The Russian-regime attacks, renewed immediately after the end of the ceasefire on Monday with strikes on a UN aid convoy, have killed about 250 people in Aleppo Province since Thursday.

The attacks have also led to the cut-off of water to an estimated 1.75 million people in the city. After bombing damaged a pumping station providing water to the 250,000 residents in opposition areas, rebels shut off supply to the estimated 1.5 million in regime-controlled districts.

Speaking before a meeting with European foreign ministers, US Secretary of State John Kerry said the situation in Aleppo is “unacceptable”:

It is beyond the pale. If people are serious about wanting a peaceful outcome to this war, then they should cease and desist bombing innocent women and children, cease cutting off water and laying siege to an entire community, and work with the international community in order to be able to bring peace to people who are starving.

Fires in Hiyan in Aleppo Province from Russian attacks:

Regime: “US is ISIS Accomplice”

Trying to keep attention off the civilian casualties, the Assad regime — supported by Russia — declared on Saturday that a US-led airstrike on regime troops last week was intentional.

“The Syrian Government puts all the responsibility for aggression on the US, as the facts show that it was a deliberate attack, but not a mistake – even if America says the opposite,” Foreign Minister Walid al-Moallem said during a debate at the UN General Assembly.

“This vile aggression proves that the US and its allies are accomplices of Islamic State and other terror groups,” he declared.

More than 60 regime troops were killed when two F-16s attacked on a frontline between pro-Assad forces and the Islamic State in Deir ez-Zor Province in eastern Syria.

The US military says the incident was a targeting error. Britain, Denmark, Australia — all of whom said they were involved in the operation — echoed the line.

The Americans said they informed Russian counterparts about the intended attack 30 minutes before the bombing.

But Russian Foreign Minister Sergei Lavrov maintained doubt in a TV interview on Saturday, “[It is] very hard to believe that reconnaissance officers of the US-founded coalition that is fighting Islamic State on the whole Syrian territory could forget about who is located where,” he said.

Lavrov said the circumstances were “a bit strange”.

A local video journalist with the Thiqa Agency narrowly escapes a pro-Assad bomb while recording airstrikes in western Aleppo Province:

Opposition & Rebels: Russia Can No Longer Be Part of Negotiations

Rebels and the opposition Syrian National Coalition have said that, amid the escalation in bombing of Aleppo, Russia can no longer be part of negotiations for a political resolution.

In a joint statement, the Coalition and 34 rebel factions said Moscow “is a partner to the regime in crimes against our people”.

The groups called for implementation of all UN Security Council resolutions, especially those concerning humanitarian issues — “this matter is not up to negotiation”. They said any ceasefire must include an end to “all bombardments, killings, and forced displacements”.