Britain Analysis: Refugees —- London Fails the “Test of Our Humanity” 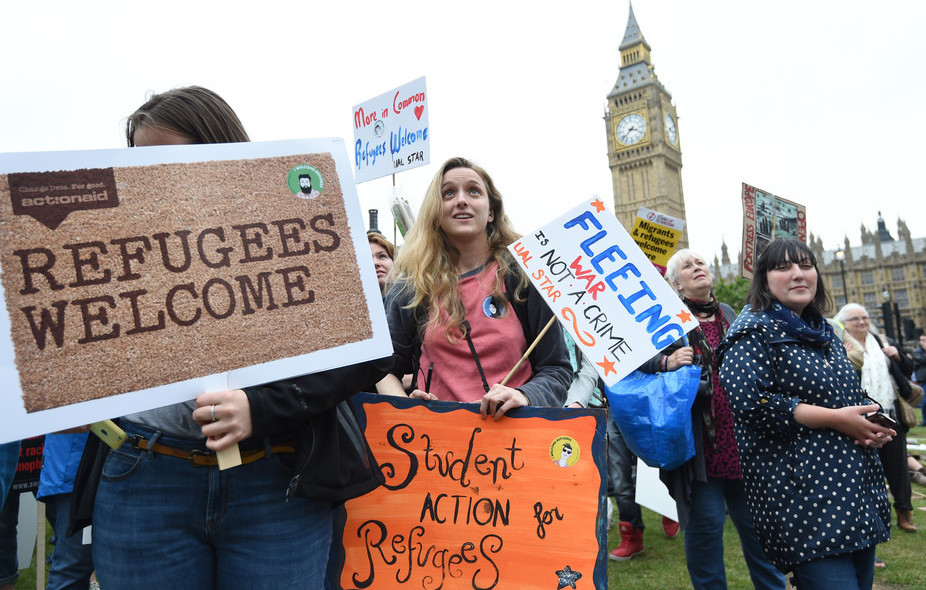 PHOTO: These Britons call for a welcome for refugees — but the Government is not listening (Facundo Arrizabalaga/EPA)

Nando Sigona of the University of Birmingham writes for The Conversation::

In a compassionate and compelling speech, Barack Obama called the response to the global refugee crisis “a test of our humanity” and invited world leaders attending the Leaders’ Summit on Refugees on September 20 to do more to assist those fleeing war and persecution.

The British Prime Minister, Theresa May, went to the same summit in New York, but with a different agenda – to stop uncontrolled migration. She had three key proposals: to help refugees to claim asylum in the first safe country they reach, to make a better distinction between refugees and economic migrants, and to bolster the right of all countries to control their borders. It is worth considering each of these proposals in turn to assess what impact they may have on the current crisis.

Supporting initiatives to help refugees claim asylum in the first safe country they reach is hardly new policy. This has actually been the status quo for more than a decade and one that wealthy Western states have actively supported with generous donations to UN agencies. It led to the creation of more and more refugee camps, some as large as cities, and an economy of dependence among refugees that has led some observers to talk of refugee warehousing.

As Obama reminded world leaders in his speech, the large majority of refugees live in developing and middle-income countries such as Turkey, Pakistan, Lebanon, and Kenya. Syrians in Lebanon, Afghans in Pakistan, and Somalis in Kenya all arrived crossing just one border.

The distinction between refugees, those who are forced to flee their country because of conflict and persecution, and economic migrants, who left their homes in search of a better livelihood, is far less neat than these definitions seem to imply.

Research I have carried out with colleagues at the universities of Coventry and Oxford, which involved 500 interviews with newly arrived boat migrants in Greece, Italy and Malta, show that 77% of those arriving in Greece and Italy in 2015 had experienced persecution, violence, death threats or human rights abuse. But, as the Nigerian writer Chimamanda Ngozi Adichie eloquently captured in a recent speech: “Nobody is only ever just a refugee.” We found that aspirations to a safer and better life were intermingled with the recollection of the tragic events that had initiated the journeys.

Despite general assumptions concerning arrivals in Italy from Libya being mostly “economic migrants”, only 38% of those our research team interviewed in Italy cited economic factors as the primary reason for leaving their home country. Even among these interviewees, many explained that their ability to earn money and provide for their families had been curtailed due to conflict, widespread violence and political persecution.

May’s call for stronger border control to stop uncontrolled migration is disingenuous. First, because Europe has been building fences and walls for the last 15 years – in Hungary, Greece, Bulgaria, Croatia, the Spanish enclaves of Ceuta and Melilla bordering Morocco, and near Calais in France. And second, because she forgets that all of the Syrians who entered Europe and have now been recognised as deserving international protection as genuine refugees, had to cross into the EU illegally and at high personal risk in the absence of any legal or safer routes.

As a young Syrian interviewee who had traveled along through the Eastern Mediterranean route told my research team:

Nobody gets a visa. I wish we could pay the embassy instead of the smuggler in order to come here.

One wonders who May was really talking to at the UN: to the world leaders in front of her or across the Atlantic at the more nationalist-minded and xenophobic members of her party and voters. Just a few minutes earlier Obama had said “today a nation ringed by walls would only imprison itself”. Surely the refugee crisis urges the international community to think outside the box and develop new responses, but May’s proposals are not a step in the right direction.

This article was co-published as part of the University of Birmingham’s ‘Birmingham Briefs’ series.