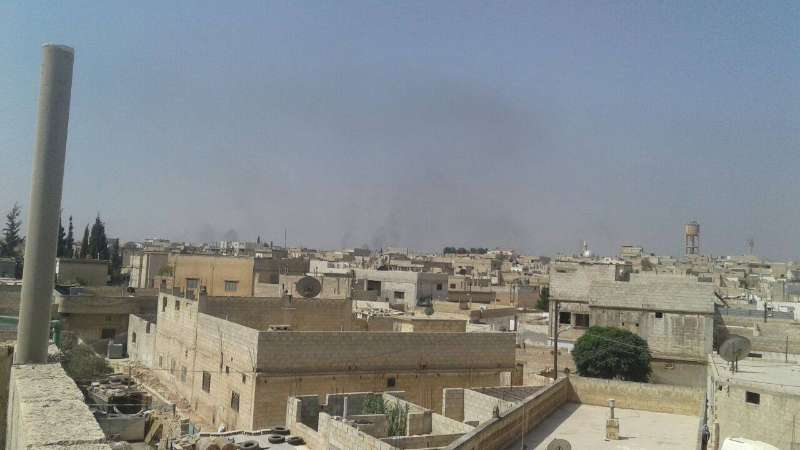 PHOTO: The town of Souran in northern Hama Province, captured by rebels on Wednesday

UPDATE 1630 GMT: Claimed footage of a pro-Assad airstrike which hit a convoy of civilians fleeing the fighting in the towns of Souran and Taybat al-Iman, killing dozens:

UPDATE 0920 GMT: Rebels have now confirmed the capture of the village of Maardas, near the important fortified village of Ma’an.

The pro-rebel site Eldorar News also claims that a nearby missile base has been occupied.

Pro-rebel activists now believe that the offensive will move on the high ground of Mount Zain al-Abedine. 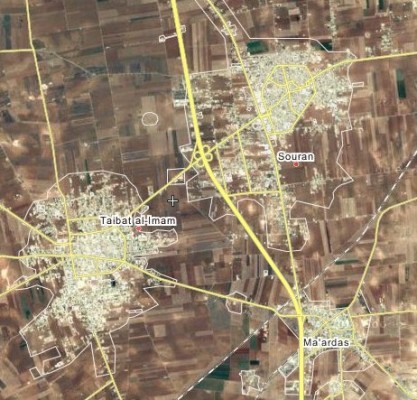 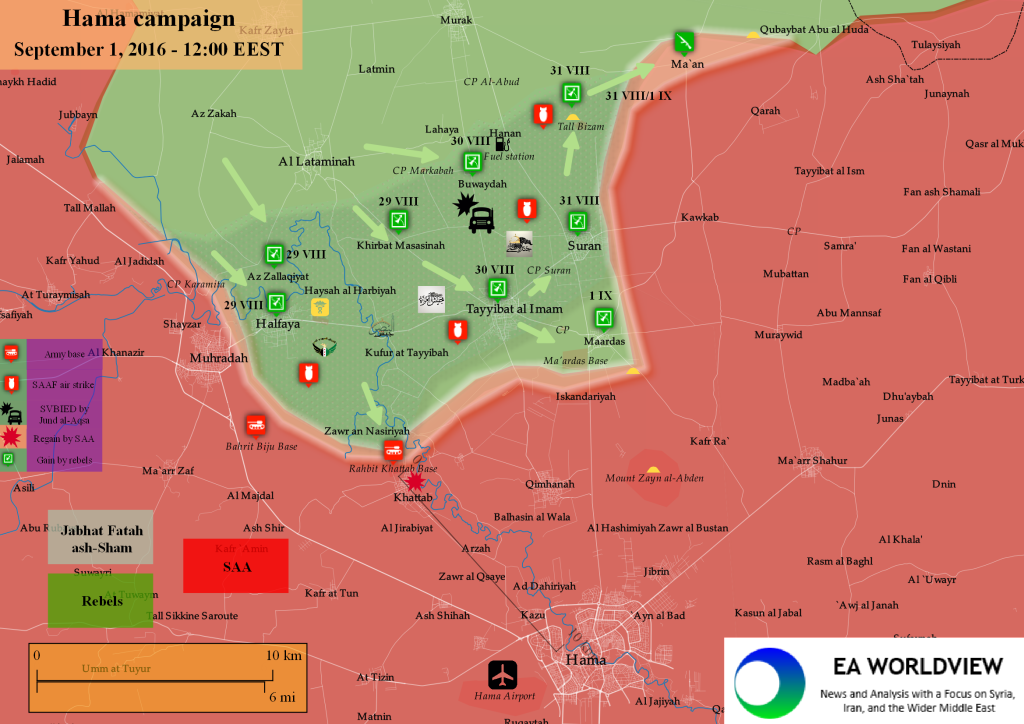 ORIGINAL ENTRY: On the third day of their offensive, Syria’s rebels have taken another town in northern Hama Province on Wednesday, closing on Hama city and putting further pressure on an overstretched Syrian military.

Having claimed a series of villages and the towns of Halfaya and Taibat al-Imam in the first 48 hours, rebels captured Souran, northeast of Hama, on Wednesday afternoon. By evening, they were closing on yet another town, Ma’an.

The rebels are now within 10 km (6 miles) of Hama city, Syria’s fourth-largest city and a center of opposition to the Assad regime. However, they are unlikely to try and enter the city at this point. Instead, they are likely to consolidate the territory — now well over 75 square km (27 square miles) — and threaten to split regime forces in Hama from those in neighboring Aleppo Province.

Pro-regime accounts tried to rally morale by claiming that troops from the elite “Tiger Forces” and their commander, Colonel Suheil al-Hassan, are being redeployed from the Aleppo front to Hama. There is no confirmation of the reports.

A rebel source offers another assessment of the challenge, “Iran has a very strong presence in Hama, probably thousands of troops and many tons of material. We haven’t seen these on the battlefield yet, at least not in significant numbers. Rebels are still fighting the regime’s criminal gangs and the remains of the Syrian Arab Army.” 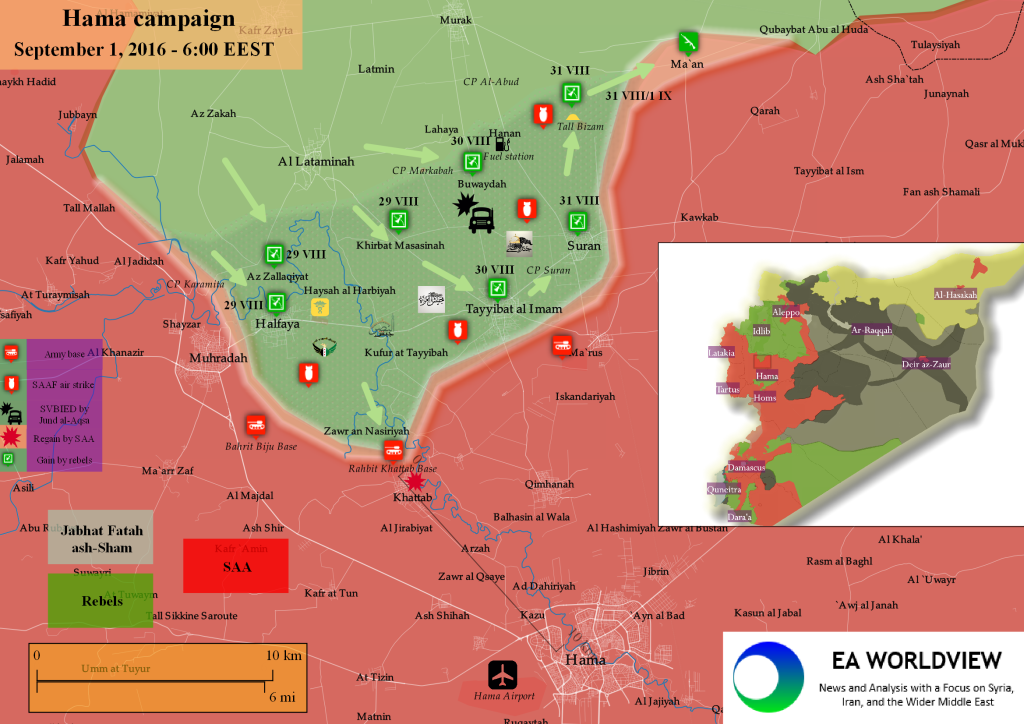 The Syrian military and foreign allies are already under pressure in Aleppo, where a rebel offensive from late July has taken territory southwest of Aleppo city — including one of the regime’s largest artillery base — and broken the siege of the city.

On Wednesday, pro-Assad forces carried out yet another assault on the air force college adjacent to the base. Troops briefly entered the college, taking photos of themselves, but rebels said the attacking force was forced to withdraw after suffering heavy casualties.

A well-placed rebel source explains about Wednesday’s attack on the air force college, “The regime only advanced into the first buildings which are nearly leveled and considered a no-man-land — with no one holding it.”

The Syrian military — joined by foreign militias — have tried repeatedly to regain the base since rebels captured it in early August. However, all attempts up to now have failed, with troops cut down at the perimeter of the complex.

The intensive pro-Assad ground and air attacks this week have only succeed in holding one hill — Mahruqat — against rebel counter-assaults, with the village of Amiriyah still being disputed.

Syria State TV’s report on the attack on the air force college: 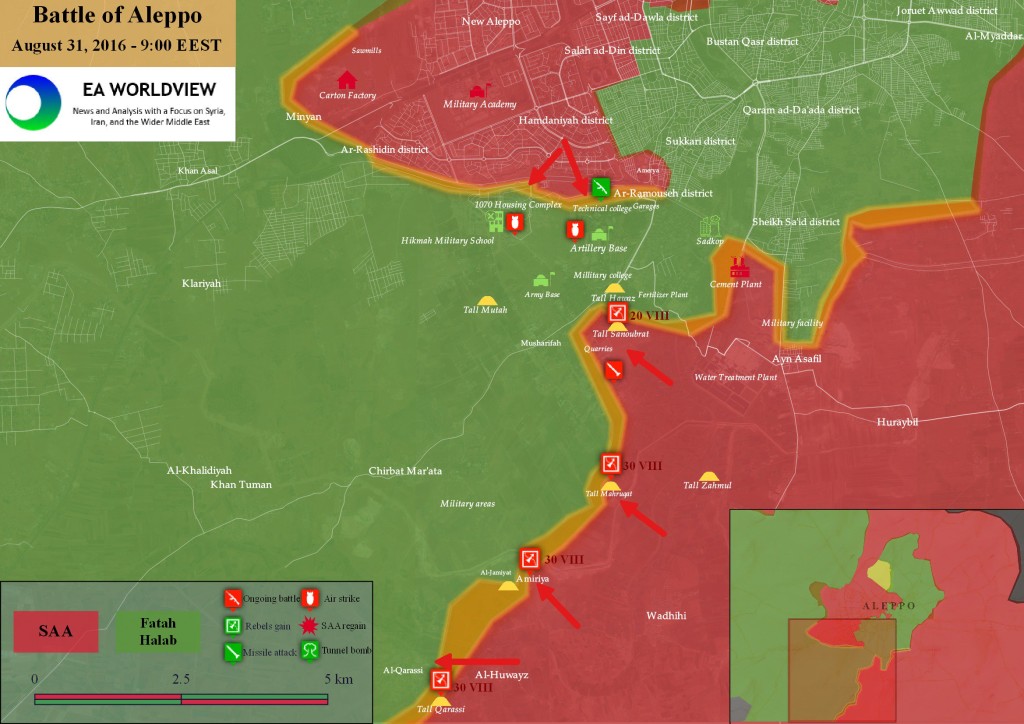 The Turkish-supported rebel offensive has taken four more villages from the Islamic State in northern Aleppo Province, near the Turkish border.

Continuing their move west from Jarablus, the border town taken at the outset of the offensive last Wednesday, the rebels are now 6 km (3.5 miles) from Sajur Lake (see map).

The Turkish Foreign Ministry said Cavusoglu had briefed lavrov about successful operations against the Islamic State. There was also discussion of “the delivery of humanitarian assistance, the termination of hostilities, and the start of a political process in Syria”.

Russian State outlet TASS did not mention any discussion of Turkey’s support of rebel operations against Kurdish forces, and it avoided condemnation of the rebels by using Ankara’s term of “Syrian opposition groups”.

Snell was abducted by the jihadists Jabhat al-Nusra last month after crossing into northern Syria from Turkey. She escaped, but was seized by Turkish security forces soon after she crossed the border.

Snell has worked with outlets such as Vocativ, MSNBC, and Turkey’s TRT.

A State Department official said the US Government had been aware of Snell’s presence in Syria and that helping her to get to a safe location was the consistent and overriding goal. Personnel from the US mission in Turkey were dispatched to the Turkey-Syria border to support Snell’s safe exit, an official said.

Salih Muslim, the co-leader of the Kurdish Democratic Unity Party (PYD), has declared that “international powers” have allowed Turkish military intervention in northern Syria — supporting a rebel offensive that has regained territory from the Kurdish-led Syrian Democratic Forces as well as the Islamic State — to trap Turkish President Recep Tayyip Erdoğan.

Muslim claimed, “International powers are silent because they think Erdoğan is over-confident and let him invade so that he learns his lesson. Under normal conditions, the US does not support Turkey.”

The PYD and its YPG militia have been pushing back against the initial US position that Kurdish forces should withdraw east of the Euphrates River, giving up positions such as the city of Manbij, taken from the Islamic State last month.

As the rebels advanced against the SDF, the US has shifted more to criticism of the Turkish intervention and declarations — denied by Ankara and rebels — that a de facto ceasefire is now in effect.