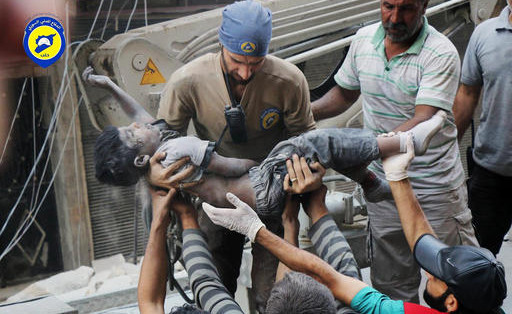 PHOTO: Rescuer carries the body of a young boy killed by Russian-regime bombing of Shaar district of Aleppo on Wednesday

UPDATE 1430 GMT: The department overseeing water and sewage services in opposition-held Aleppo has issued a statement explaining that regime attacks are responsible for the cut-off of water to an estimated 1.75 million people across the city.

The General Management of Services’ Water and Sewage Department said a regime airstrike on Sunday damaging a power grid line feeding the water-pumping station that supplied about 250,000 people in opposition areas.

On Monday, according to the statement, another airstrike hit the Zarbah electrical station, shutting the high-voltage line supplying the pumping station for regime-controlled areas with about 1.5 million people.

The Department denied initial claims that rebels had cut off supplies to the regime districts.

UPDATE 1240 GMT: Russia has rejected a US proposal for a seven-day ceasefire in and near Aleppo.

Ryabkov countered the US initiative with the suggestion of a 48-hour truce. He said — despite Russia’s support of the pro-Assad siege on opposition areas of Aleppo — that this would be for humanitarian purposes.

ORIGINAL ENTRY: Defying a warning by US Secretary of State John Kerry, Russia and the Assad regime maintained their bombing of opposition areas of Syria’s largest city Aleppo on Wednesday, knocking out two of the area’s remaining four fully-functioning hospitals.

In a phone call to Russian Foreign Minister Sergei Lavrov, Kerry said that the US would break contacts with Moscow if the attacks did not cease. He expressed “grave concern” over attacks on hospitals, water supplies, and other civilian infrastructure, and said that the US holds Russia responsible for the use of incendiary and bunker-buster bombs in an urban area.

But the 10-day escalation of bombing continued, with two patients slain in one of the hospitals. After months of Russian-regime strikes on medical facilities, there are now only about 35 doctors — and only seven who can carry out surgeries — for 250,000 residents in the opposition districts.

Another bomb hit near a bakery, killing an estimated 20 people as they queued for bread amid the Russian-regime siege.

The Local Coordination Committees documented the deaths of 28 people in and near Aleppo, bringing total to between 400 and 500 since last Thursday.

A radiologist at the largest trauma hospital in eastern Aleppo city said, “The warplane flew over us and directly started dropping its missiles … at around 4 a.m. Rubble fell in on the patients in the intensive care unit.”

Oxygen and power generators were destroyed and patients were transferred to another medical facility.

“The doctors are exhausted. Many of them are working until 4 or 5 a.m., and then starting again at 9. They are also scared,” said Maher Saqqur, a Canada-based surgeon who has been advising the doctors in Aleppo over Skype.

Kremlin: “No Russian Air Forces In Offensive Against Civilians”

The Russian-regime escalation began on September 19, hours after the Syrian military declared an end to the short-lived US-Russian ceasefire, with an attack on a UN aid convoy west of Aleppo.

Kerry called for a suspension of Russian and regime military flights over areas of humanitarian need last week, but the Assad regime and Moscow immediately rejected the move. The Kremlin has also dismissed the subsequent criticism of the American, British, and French Ambassadors at the UN of Russia’s “barbarism”.

I strictly rule out the possibility of Russian airstrike forces being involved in offensive against civilians. This is out of possibility. Russia’s Air Forces are still performing their task in terms of fighting terrorist organizations.

Peskov insisted, “Russian military forces are acting in a strict accordance with international law and all the weapons being used in no way contradicts with the provision of relative international agreements.”

in one week in #Aleppo, VDC documented 377 battle-related deaths; 369 are civilians and only 8 are non-civilians. pic.twitter.com/YEivc3biRw

Meanwhile, the Russian military put out the diversion that “terrorists” are planning chemical attacks, including on opposition areas in eastern Aleppo.

Lieutenant-General Viktor Poznikhir said in a briefing, “We’ve received the information terrorist groupings are preparing provocative strikes with chemical shells at the positions of the Syrian Armed Forces and residential areas in the eastern districts of Aleppo.”

Asked by an Al Jazeera English reporter yesterday about the bombing of the hospitals on Wednesday, the Assad regime’s UN Ambassador Bashar al-Ja’afari simply laughed.

Assad's man at the UN laughing about bombed hospitals in Aleppo – that's how concerned he is about Syrian civilians pic.twitter.com/QBIwTgf1dR

The Syrian military claimed on Wednesday morning that it had taken a district near Aleppo’s Old City, but rebels posted video to refute the claim.

US Officials: “Tougher Talk” and Other Actions Being Considered

US officials said on Wednesday that firmer responses were being considered to the bombing, although the prospect of significant action appeared to be limited.

One official said the possibilities for President Obama “begin at tougher talk”. Another official said Washington will first have to “follow through on Kerry’s threat and break off talks with the Russians”.

The new discussions are being held at “staff level” and have yet not produced any recommendations for Obama.

Earlier this year, 51 State Department personnel called for a range of action, including limited military responses against the Assad regime, to put pressure on Damascus and Moscow. However, Obama’s senior staff rejected any consideration.

One option for the Administration is permission to Gulf States to supply rebels with more sophisticated weapons.

US officials said earlier this week that Saudi Arabia is considering the provision of portable anti-aircraft MANPADS; however, the statement appeared to be more of a caution to Riyadh against supply, rather than an endorsement.

A local source in Syria said the Saudis have not yet begun any deliveries of MANPADS.

Another option is US airstrikes in support of rebels. One official said these “might not reverse the tide of battle, but might cause the Russians to stop and think”.

However, the support is considered unlikely because of the prospect of a Russian response.

US officials had considered a humanitarian airlift to rebel-held areas, with escorts by US warplanes, but this has been deemed too risky and been “moved down the list,” one official said.

The co-chair of the Kurdish Democratic Union Party (PYD) has praised Russia’s intervention for preventing the partition of Syria and the expansion of Turkish influence, according to Russian State outlet Sputnik News.

Sputnik quoted Saleh Muslim as saying that Moscow’s military, economic, and political action stopped the country “from being cut into pieces and becoming a part of a new Ottoman Empire”.

Russia has courted Muslim and the PYD — the leading Syrian Kurdish force because of its YPG militia — for months, seeking the inclusion of the group in discussions including the regime and opposition.

Tens of thousands of residents in Syria’s largest site for the displaced are without water because of a strike by tanker drivers.

The Atmeh collection of 54 informal camps and 60,000 residents in northern Idlib Province, near the Turkish border, has been cut off since Monday.

More than 45 drivers launched a strike against Syrian Green Hands, the sole aid group that delivers water to Atmeh. ,

“The payment per water delivery was lowered from $6 to $5.50. Our income relies solely on wages from [Syrian Green Hands], so we didn’t have any other choice but to go on strike,” said Ahmad al-Khaled, one of the drivers.

Atmeh is already suffering from a lack of bread, after Turkey’s IHH Humanitarian Foundation stopped deliveries more than three weeks ago.

Rebels are on the verge of breaking all fortified regime positions north of Hama city.

In the latest advance in the northern Hama offensive, rebels have taken Qarah and Khafasin.

Rebels initially took four towns and a series of villages in late August. After the offensive was checked by regime fortifications and the brief US-Russian ceasefire, the rebels renewed their march last week with the capture of heavily-fortified village of Ma’an.

A rebel source said that the operation will continue eastward until a 35-km (21.2-mile) front is established from Halfaya, northwest of Hama, to Qasr Abou Samra in the east.

Footage of the assault of Geneina:

Syria Direct reports on rising fear in Douma, the main opposition area northeast of Damascus, after a further advance by pro-Assad forces in the East Ghouta area.

The Syrian army and allies captured the Katibat al-Ishara military base, opening an eastern front for the shelling of Douma, less than 3 km (2 miles) away.

Douma is the central position of the rebel faction Jaish al-Islam. It has been bombarded since 2012 in an attempt to break resistance.

Jaish al-Islam said on Monday that pro-Assad forces launched 117 attempts over 58 days to capture the base, firing more than 5,000 mortar shells and carrying out 390 airstrikes.

“Douma is now at the mercy of the regime’s artillery…from another front,” said Mohammed, a Douma resident. “There’s no denying that we’re afraid that that the city is going to experience an increase in the pace of the bombings.”

Taking the base “is no small feat,” Firas al-Abdullah, a Douma-based citizen journalist, added. “The regime has a secure foothold in this base and now Douma lies squarely before them.”

The Syrian military and allied military broke through in East Ghouta this spring, taking much of the southern area after rebel defenses were weakened by in-fighting.