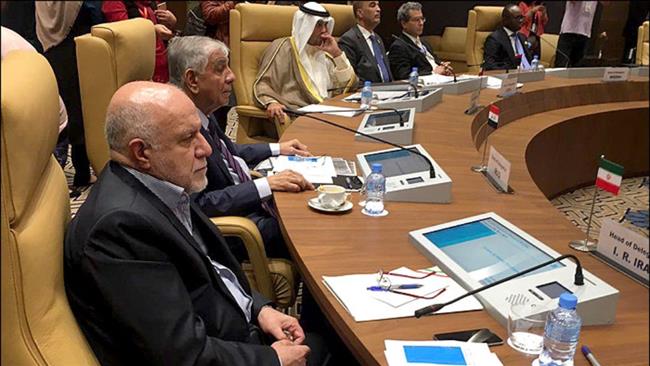 Iran is claiming victory with a decision by the oil cartel OPEC to cut production.

Oil Minister Bijan Zanganeh told reporters after an extraordinary meeting in Algeria on Wednesday, “OPEC made an exceptional decision….After two and a half years, OPEC reached a decision on managing the market.”

Zanganeh said OPEC would reduce output by about 700,000 barrels per day to a range of 32.5-33.0 million barrels per day. He also said that a special committee will be established to assign production caps to different member states.

Reports indicated that Iran, along with Nigeria and Libya, was given an exemption from any cuts. The arrangement allows the Islamic Republic to maintain its recovery of production and exports after January’s implementation of the July 2015 nuclear deal.

Tehran has lobbied for months for a cut in OPEC production because of the sharp drop in the global oil price since 2014 from about $120 per barrel to as low as $25.

The price was about $45 before Wednesday’s meeting, and is now about $48. Iran is seeking a level of at least $55.

At the same time, the Islamic Republic has insisted that it must be allowed to maintain and even expand its production. Output and exports have recovered about 40% since January, with production now at 3.6 million bpd and sales at about 2 million bpd.

The lack of detail in Wednesday’s agreement raised questions among analysts as to whether there will be any effective production cap and quotas.

Before the meeting, Saudi Arabia — which is engaged in a bitter diplomatic battle with Iran — offered to freeze output if Tehran would remain at its current production level up to the end of 2016. The Iranians did not publicly respond.

This week, Riyadh said privately that it would join a co-ordinated cut of production of up to one million bpd if Iran would accept the freeze on its output.