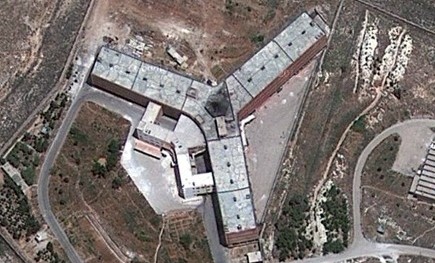 PHOTO: Sednaya Military Prison near Damascus — “It felt like the purpose was death, some form of natural selection, to get rid of the weak as soon as they arrive”

Almost 18,000 people have died in Syria’s prisons since the uprising began in March 2011, according to a new report by Amnesty International.

The reports documents the “crimes against humanity by Government forces” through the cases of 65 torture survivors who described abuse and inhumane conditions, both in security branches operated by regime intelligence agencies and in Saidnaya Military Prison on the outskirts of Damascus. Most said they had witnessed prisoners dying in custody and some described being held in cells alongside dead bodies.

The death toll of 17,723 has been compiled by the Human Rights Data Analysis Group, which uses scientific approaches to analyse human rights violations. Amnesty and HRDAG emphasize that the figure is a conservative estimate, given that tens of thousands of people have been forcibly disappeared in detention facilities.

To illustrate the torture, Specialists at Forensic Architecture, based at London’s Goldsmiths University, created a virtual 3D construction of Saydnaya through architectural and acoustic modelling and descriptions from former detainees.

They treated us like animals. They wanted people to be as inhuman as possible… I saw the blood, it was like a river….I never imagined humanity would reach such a low level….They would have had no problem killing us right there and then.

Another spoke of the poor conditions, recalling how dozens died of suffocation when ventilation in Military Intelligence Branch 235 in Damascus stopped working:

They began to kick us to see who was alive and who wasn’t. They told me and the other survivor to stand up… that is when I realized that… seven people had died, that I had slept next to seven bodies….I saw the rest of the bodies in the corridor, around 25 other bodies.