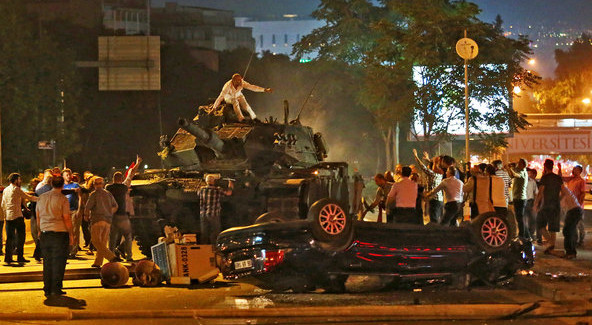 UPDATE 2030 GMT: An anti-coup march on Istiklal Avenue in Istanbul:

“I am calling on the U.S. and Mr. President. Hand over that person [Gülen] in Pennsylvania after this coup attempt,” Erdoğan said to a crowd gathered at his residence in Istanbul.

Gülen was an ally as Erdoğan rose to power as Prime Minister, but the two men fell out, culminating in a split amid corruption allegations against the Government in 2013.

Erdoğan has accused Gülen on creating a parallel movement within a “deep state” in an attempt to overthrow the President, infiltrating the military, security services, and the judiciary.

Earlier on Saturday a judicial body dismissed 2,745 judges, and prosecutors ordered the detention of 140 members of the Supreme Court and 48 members of the Council of State (see earlier entry).

Öztürk was arrested even though he called on rebelling soldiers to return to their garrisons.

A Turkish official has also said that Akin Ozturk, a former air force commander and Turkey’s military attache in Israel, is involved in the coup attempt and will be charged with treason.

Two generals of the 2nd Army, Adem Huduti and Avni Angün, are also being held.

A spokesman said the normal schedule had been resumed from Europe’s third largest hub, though delays were to be expected.

Lebanon’s Middle East Airlines said it would resume twice daily flights to Ataturk from Sunday. British Airways said in a statement it was halting all flights to Turkey on Saturday and one on Sunday as a precaution.

UPDATE 1450 GMT: A police officer rescues an anti-Government soldier, pulling him from a disabled tank, from possible lynching by a crowd:

UPDATE 1400 GMT: The US Consulate in Adana in southern Turkey says the Incirlik Airbase, the main base for American warplanes in the country, is blocked by local authorities. Power has been cut.

No reason is given in the announcement, but claims are circulating that anti-Government forces used Incirlik for staging of air operations during the coup attempt.

US troops at Incirlik were put on highest alert — Force Protection Condition Delta — on Friday night.

The firings were ordered by the High Council of Judges and Prosectors (HSYK), who also removed five members from its board.

The Chief Public Prosecutor’s Office in Ankara has decided to take 140 members of the Supreme Court and 48 members of the Council of State into custody, according to Anatolian News Agency.

Among those detained are two of the 17 judges of the Constitutional Court, Aparslan Altan and Erdal Tercan.

President Erdoğan has often accused the judiciary of being infiltrated by his political opponents, including the followers of exiled cleric Fethullah Gulen.

UPDATE 1030 GMT: Reuters is reporting that an anti-Government group has taken over a frigate and taken the head of the Turkish fleet hostage at Turkey’s Golcuk naval base.

Tractors blocking the entrance to the naval base: 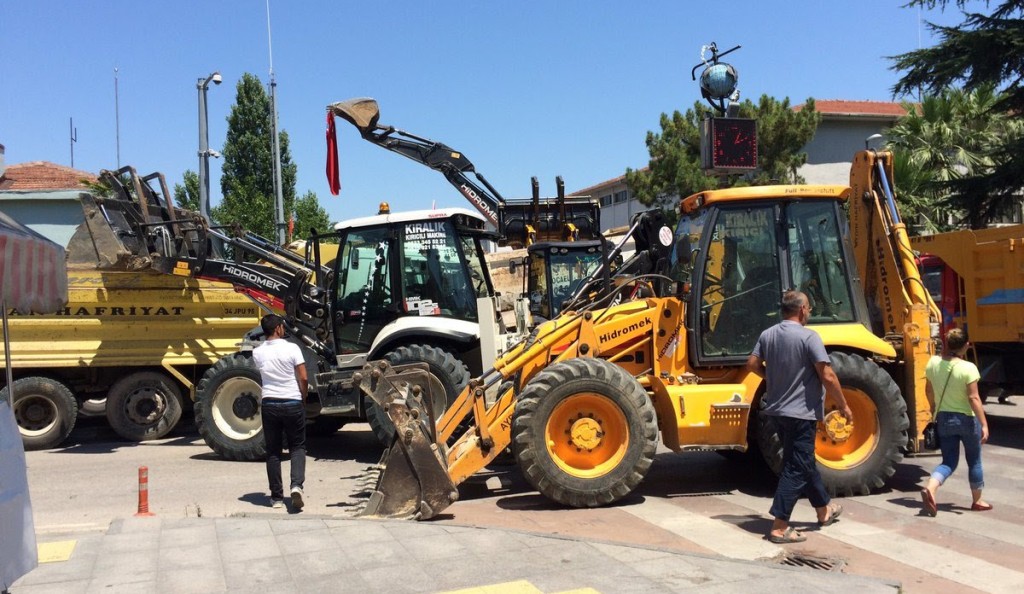 UPDATE 1020 GMT: Prime Minister Binali Yildirim has updated the death toll to 161. He said that 1,440 people were wounded and that there were 2,839 arrests of military personnel.

The Turkish military later said there were 194 deaths.

Among those killed was a photographer of the Yeni Şafak daily newspaper, Mustafa Cambaz. He wrote in his last message: “We are taking to the streets upon Chief Commander Erdoğan’s will and command.”

Graphic video indicates some anti-Government troops were lynched by crowds.

A body on the Bosphorus Bridge, covered in a Turkish flag: 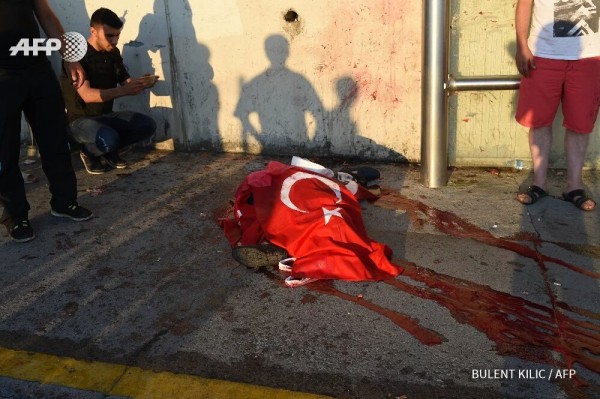 The Parliament building in Ankara after bombing by anti-Government forces: 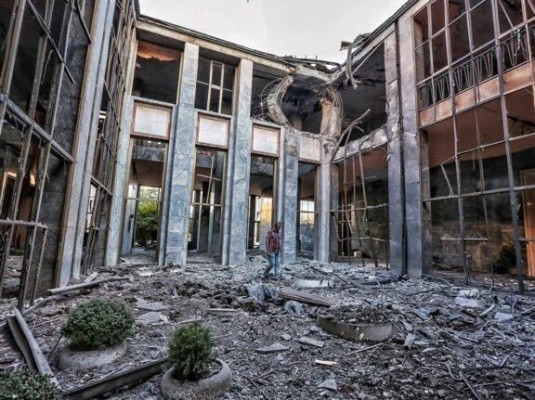 State TV channel TRT, back to service this morning:

Newsroom @trtworld. Just a few hours ago this place was occupied by coup plotters. pic.twitter.com/q5CR3qEa5P

UPDATE 1000 GMT: While the military’s Chief of General Staff, Hulusi Akar, was rescued from coup plotters, the fate of others is unknown.

Deputy Chief of Staff Ümit Dündar said the air force’s command, the gendarmerie command, and some units from the armored forces took part in the coup attempt. He said 41 police officers, two soldiers, and 47 civilians were killed by those rebelling, while 104 in the plot were killed by security forces:

The coup attempt was rejected by the chain of command since the very beginning. The people protected democracy via going out to the streets and not leaving them to the coup supporters.

Turkey has witnessed an insanity that hit its own parliament and killed its own civilians. This nation will never forget this cowardice.

He said the military is “determined to clean the members of the parallel movement from the army”: “No one who betrayed the state will be left unpunished.”

ORIGINAL ENTRY: Turkey’s President Recep Tayyip Erdoğan appears to have survived a lightning coup attempt by a section of the military, after he called on the public to take to the streets in defiance.

Erdoğan was on vacation in Bodrum in southwestern Turkey when part of the army, air force, and gendarmerie seized key positions in Istanbul. The forces occupied bridges across the Bosphorus and stationed tanks at the Ataturk Airport — closing it to all flights — as jet fighters flew as low as 1,000 feet above the city.

The military’s Chief of General Staff was taken hostage, while the commander of air forces was held while attending a wedding on July 15 on the Anatolian side of Istanbul as five helicopters landed in the garden of the Moda Sea Club and opened fire.

The headquarters of Turkey’s intelligence agency (MIT) was attacked by military helicopters and heavy machine gun fire, wounding at least three people. The head of MIT, Hakan Fidan, was at a secure location and in constant contact with President Erdogan and Prime Minister Yildirim, according to an intelligence source.

Soldiers took over State TV, evicting staff and having an anchorwoman read a statement about their seizure of power. The statement said that, to “restore democratic order” and ensure human rights, martial law was being imposed with a Peace Council running the country.

Erdoğan responded initially with a statement via the Internet and iPhone, calling on the public to resist. Declaring that the uprising was by “junior officers”, linked to the movement of US-based cleric Fethullah Gulen, h asserted, “We will overcome this. Those who attempted this act will pay the highest price.”

The President, who has been in power since 2003, then returned to Istanbul and held a quickly-arranged press conference to denounce the “act of treason”. He said that arrests of officers were underway.

Erdoğan later speaking to supporters at the airport:

Footage of dissident soldiers surrendering on the Bosphorus Bridge:

Footage of soldiers surrendering on Istanbul Bosphorus bridge. #TurkeyCoup is over. pic.twitter.com/FlYsWoIJKh

Gulen, once an ally of Erdoğan but now accused by the President of plotting against him, denied any role in the uprising. He said in an e-mailed statement:

I condemn, in the strongest terms, the attempted military coup in Turkey. Government should be won through a process of free and fair elections, not force.

“I pray to God for Turkey, for Turkish citizens and for all those currently in Turkey that this situation is resolved peacefully and quickly.

Loyal soldiers took control of the airport soon after Erdogan landed, although rebels were still firing from the air early Saturday.

Prime Minister Binali Yildirim said fighter jets had been scrambled to intercept those were resisting.

Meanwhile, there was gunfire and explosions in both Istanbul and Turkey’s capital Ankara, with reported fights between dissident soldiers and loyal police.

State media said 90 people were killed, including some civilians and 17 police at a special forces headquarters. More than 1,100 were wounded.

State news agency Anadolu said 754 members of the armed forces have been detained, including a brigadier general in northeastern Turkey.

Anadolu said 29 colonels and five generals have been removed from their posts.

Reuters journalists saw about 30 pro-coup soldiers surrender their weapons after being surrounded by police in Istanbul’s central Taksim Square. They were taken away in police vans. 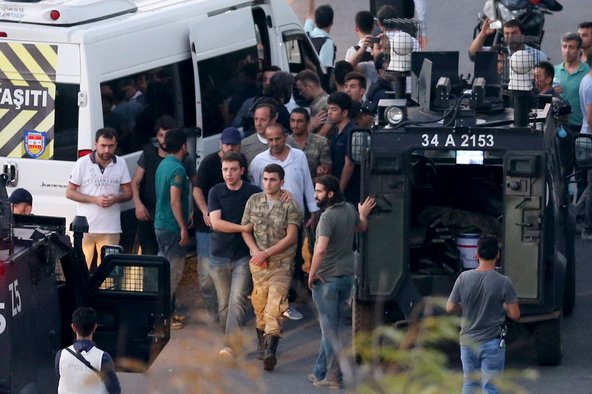 Dissident troops in the Doğan Media Building — home to outlets like Hurriyet and CNN Turk — are seized by police:

MPs were still hiding in shelters inside the Parliament building in Ankara, which was being fired on by tanks. An opposition MP said people had been wounded.

The main opposition party CHP rejected the coup soon after the dissident military’s statement was read on State TV. 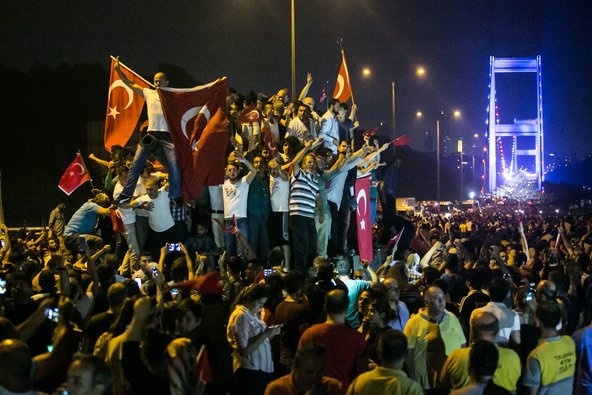 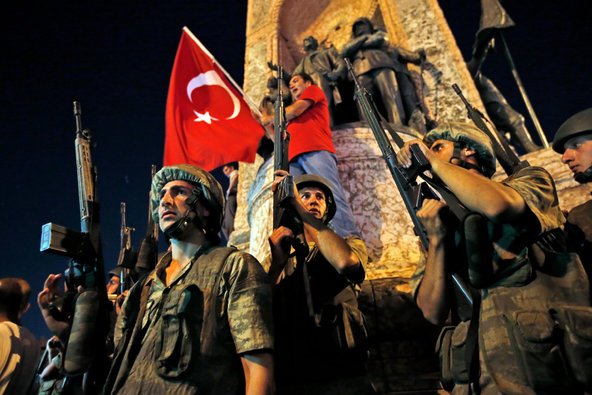