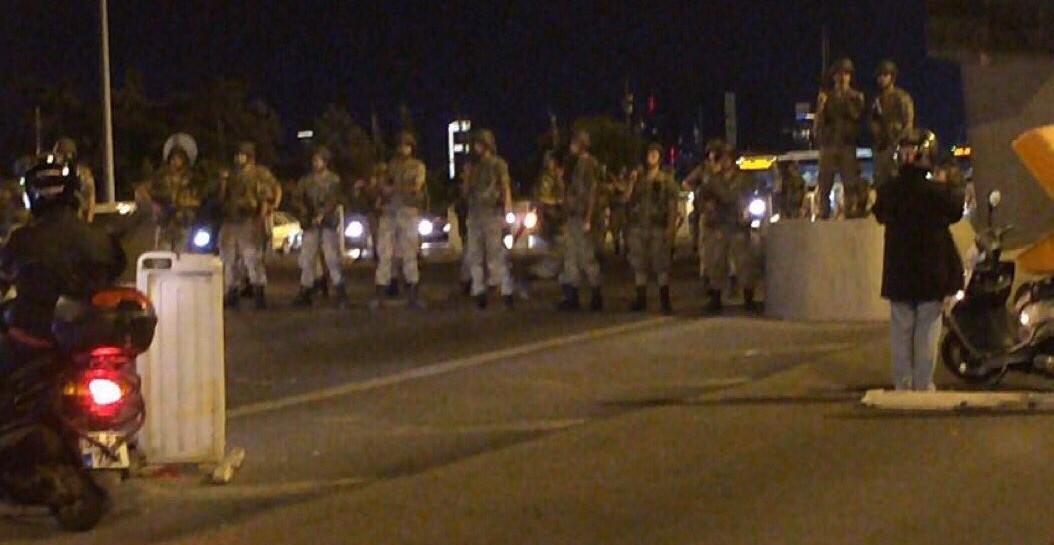 PHOTO: The Turkish army deployed on a Bosphorus bridge on Friday night

UPDATE 2145 GMT: We are getting a few hours’ rest but will resume coverage early Saturday morning.

UPDATE 2130 GMT: President Erdoğan is using the Internet to ask people to go on the streets in defiance of the military coup.

The Mayor of Ankara is also using the Internet, following the military’s takeover of State TV.

Erdoğan claimed that the coup is by “junior officers”, linked to the movement of US-based cleric Fethullah Gulen. He said that he is technically still in charge of the army.

The President declared, “We will overcome this. Those who attempted this act will pay the highest price.”

The pro-Erdogan site Daily Sabah is putting out photos of people on the streets:

UPDATE 2100 GMT: State TV is still on air, but only to transmit the military’s statement that it has taken power.

An anchorwoman is reading the statement that a new Constitution will be written. Martial law has been imposed, as a “Peace Council” runs the country under a secular rule of law with freedom guaranteed irrespective of race or religion.

Other staff have been ordered to leave the building:

Just got asked to leave work (the state broadcaster) by about 40 or 50 armed soldiers. They took our phones. #istanbul

Troops inside the building: 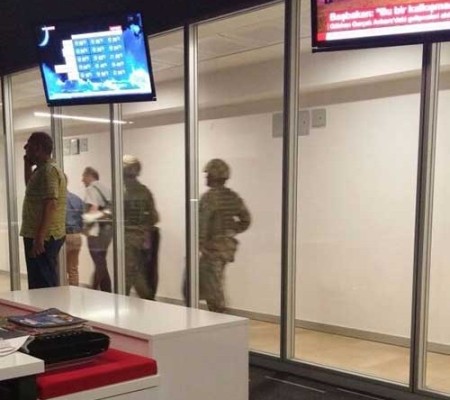 One of Turkey’s largest newspapers, Hurriyet, is now off-line.

UPDATE 2055 GMT: US airbases in Turkey, including the Incirlik base in the south of the country, have gone on highest alert, “Force Protection Condition Delta”.

FPC Delta is usually associated with a terrorist attack which is taking place or has just occurred in the immediate area.

US Secretary of State John Kerry, in Moscow for talks with Russian leaders, has said that he is unable to comment on “what may or may not be happening” in Turkey, but he hopes there will be peace, stability, and continuity.

UPDATE 2030 GMT: The Turkish army has announced on State broadcaster TRT that it has taken power for “democratic order” and to “maintain human rights”.

A statement said, “The power in the country has been seized in its entirety.”

The Chief of General Staff has reportedly been taken hostage at the military headquarters.

A Turkish MP has said that the military has surrounded the headquarters of the ruling Justice and Development Party (AKP). Another report claimed the military entered the building and asked officials to leave.

Reports are circulating that President Recep Tayyip Erdoğan, on vacation in southwestern Turkey, will soon speak. 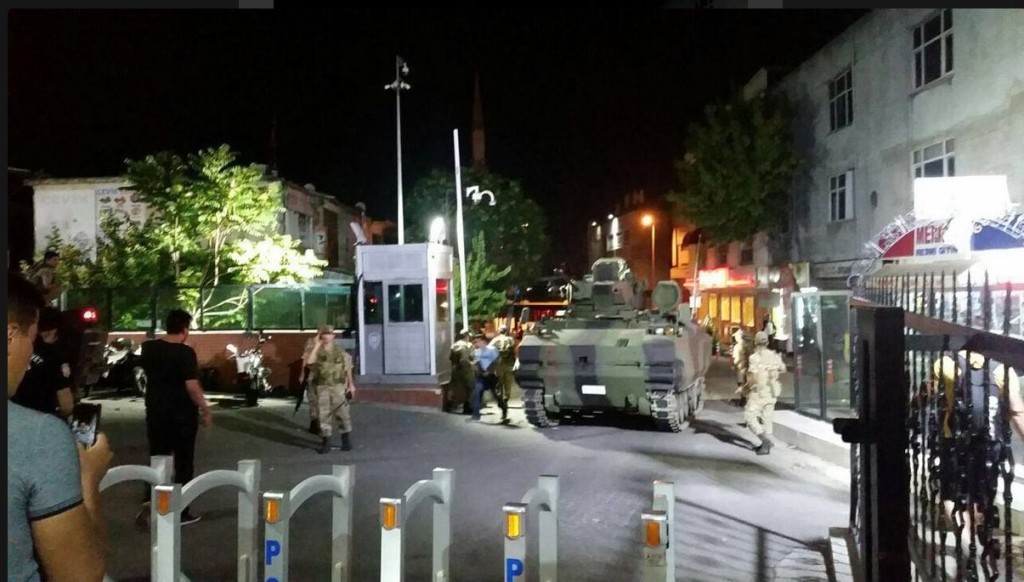 ORIGINAL ENTRY: Turkey’s Prime Minister Binali Yıldırım has confirmed that a section of the army launched an attempted coup on Friday night.

Yıldırım said, “This cannot be called a coup for the moment. This is an uprising.” He said the plotters would not be allowed to succeed.

President Recep Tayyip Erdoğan is on vacation in Bodrum in southwestern Turkey.

Divisions of the army, air force, and police deployed in Istanbul, but it was initially unclear if they were moving against or in support of the Government.

The Turkish gendarmerie blocked the entrances to the Bosphorus bridges in Istanbul from the Anatolian to the European side. Fighter jets flew as low as 1000 feet over the city. Reports said all leave for police had been cancelled.

Tanks with troops are positioned at Istanbul’s Ataturk airport, and all flights have been cancelled.

Erdoğan has been in power since 2003, first as Prime Minister and then as President since 2014.

A tank on a street in central Istanbul:

Troops and armored vehicles on a Bosphorus bridge: