Syria Special: Laying the Foundations for A “Credible Transition” 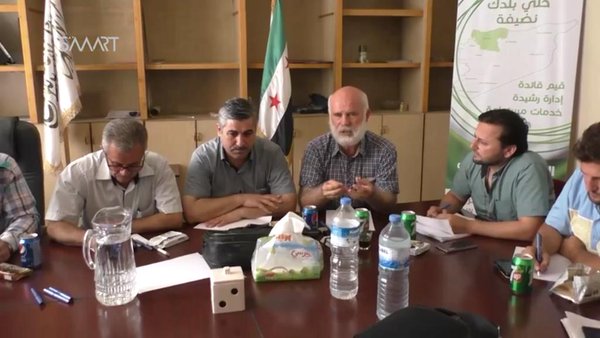 PHOTO: A local council in an opposition-held area of Aleppo city:

In spring 2015, I began discussing with my University of Birmingham colleagues Stefan Woolf and Christalla Yakinthou what could be done in Syria — given the dim chance of a long-term political resolution or a “victory” for any side on the battlefield — to ease the death, displacement, and destruction of the civil war.

Our initial thoughts had to be reconsidered because of a series of changes in the conflict. Russia’s military intervention from September changed the political dynamics as well, but Moscow could only prop up the Assad regime rather than achieving a decisive outcome. Another set of political talks was staged in Geneva between January and April, but they only reinforced our scepticism about the process, now brokered by the US and Russia. A new factor was the surge in Kurdish power, through its military gains against the Islamic State — and also against Syria’s rebels — and corresponding move to autonomy across much of northern Syria.

Despite this, our fundamental line remained. With the probability of a “soft partition” in much of Syria — a vision now reinforced by Russia’s talks with Turkey and the current US proposal to Moscow for military and political co-operation — the priority is to establish local systems for governance, justice, infrastructure, and services. And, just as the Assad regime has de facto protection for its areas of control and the Kurds are establishing their security for autonomous administrations, so opposition-held parts of Syria must have guarantees that civilians will not be bombed on a daily basis.

A summary of our article, available in full in the RUSI Journal:

Syria: Laying the Foundations for a Credible and Sustainable Transition

On 14 March 2016, Russian President Vladimir Putin suddenly declared that his country was withdrawing ‘most’ of its forces from Syria, following thousands of air strikes in support of the Syrian regime and its Iranian, Hezbollah, Iraqi, Pakistani and Afghan allies. The announcement brought yet another phase in Syria’s five-year conflict to an end; however, as with the previous phases, it has not heralded any advance towards a resolution of the crisis.

Instead, the Russian intervention contributed to a consolidation of space in which leading Syria-based actors — the regime of President Bashar Al-Assad, the opposition rebel bloc: and the Kurdish movement (dominated at this point by the Syrian Kurdish Democratic Union Party (PYD) and its militia, known as the People’s Protection Units, YPG) — exercised and entrenched their authority locally. This occurred alongside efforts which were nominally concentrated on diminishing the power of the other two actors, Daesh (also known as the Islamic State of Iraq and Syria, ISIS) and the Al-Qa’ida-affiliated Jabhat Al-Nusra. This consolidation has been helped along by the support that the opposition rebel bloc receives (primarily from Saudi Arabia and other Gulf States), a partial ceasefire that has been in place since 27 February 2016, and several rounds of negotiations in Geneva.

At the time of writing [April 2016], the ceasefire between rebels, the Syrian military and the Assad regime’s external allied forces (Russia, Hezbollah, Iran, and Iraqi and Afghan militias) is breaking down in northwest Syria, notably near Aleppo and in the coastal Latakia province. At the same time, Kurdish YPG fighters are attempting to take territory from the rebels, while fighting has also continued between Daesh and rebels in northern Syria near the Turkish border. None of these contests are likely to conclude with a decisive military victory for any side. The situation in Syria is thus one characterized by a political and military stalemate and de facto partition. As the prospects of moving beyond this status quo in the near future are limited, a further consolidation of the various frontlines between regime, Kurdish and opposition forces is more likely to offer a stabilization of the situation across much of Syria. 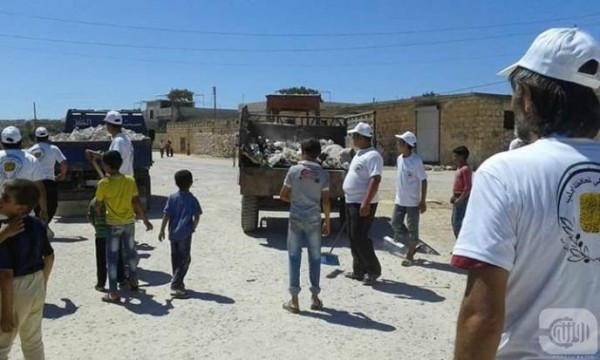 This analysis does not, in line with most of the literature on civil war settlement, advocate the partition of Syria as a long-term solution to the country’s ongoing conflict. However, equally one cannot rule out that such partition – de facto or de jure – will be the eventual outcome of a civil war now in its sixth year. Therefore, the question this article addresses is not what a comprehensive and sustainable settlement of the conflict may look like in the future, but rather how to connect the legitimacy recently conferred on various Syrian actors by the Geneva negotiations and other international discussions to existing and future local arrangements establishing stability and security on the ground.

These, in turn, are necessary conditions for a credible and sustainable transition from the current civil war. Arrangements put in place now for governance, reconstruction, provision of services, justice and civic engagement will lay the foundation for, and shape the direction of, the political, legal, economic and social constructions that will be necessary if there is ever again to be a meaningful “Syria” in the sense of a single state, or even if several entities emerge in the aftermath of the civil war. These arrangements must be made now, rather than waiting for a terminal moment in the conflict. They must be based on recognition of the necessity of a “bottom-up” approach, establishing connections with local groups rather than imposing a preconceived international model of the proper, “moderate” procedures and actors.

It is against this background that this article assesses the options of an interim system which – following the declaration of a cessation of hostilities – could establish the foundations for a subsequent transition, regardless of its endpoint. Thus, this analysis begins from the ground up, rather than from a top-down projection of ‘Syria’ from the outside. Drawing on the specifics of the Syrian case and the wider studies of interventions in, and transitions from, civil war3, the article considers the challenges of peace- and state-building, and of transitional justice, identifying both risks and mitigating actions.4 The key point here is that risk mitigation needs to begin now – and it needs to start with a sober analysis of the realities on the ground, rather than with the types of wishful, evasive and hyperbolic thinking that has characterised so much of Western intervention for more than a decade….

[Other analysts] focus on the creation of safe zones’ the partition of territory with international guarantors of the respective regime, opposition and Kurdish areas; prisoner releases; humanitarian deliveries; and a co-operative destruction of Daesh…..[Our] examination focuses on the governance and transitional justice arrangements needed for a credible and sustainable post-civil war transition in Syria that can and should be supported by the international community now.