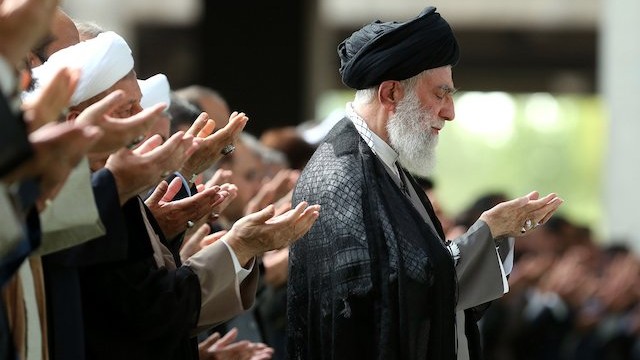 Iran’s Supreme Leader has proclaimed that the wave of terrorist attacks in the Middle East and beyond are the result of US, British, and Israeli plotting.

In his speech on Wednesday, marking the end of the holy month of Ramadan, Ayatollah Khamenei referred to bombings in the past week in Iraq, Turkey, and Bangladesh that have caused hundreds of deaths. The attacks have been linked to the Islamic State, but Khamenei preferred to cast the blame elsewhere.

Terror attacks hitting people in some countries are result of intelligence services & dirty hands of US, UK & Zionists fostering terrorism.

The Iranian regime has stepped up its rhetoric about “terrorism” to link its regional concerns, including the crises in Syria and Iraq, with its call for vigilance against the enemy at home. Last week the Supreme Leader warned of “terrorism” connected with US involvement in the Middle East, while State TV on Monday featured the “confessions” of two men accused of ISIS membership and plans for 50 attacks in Tehran and other Iranian cities.

The Supreme Leader has also used the concern over “terrorism” to justify the continued suppression of dissent, including the strict house arrests of opposition leaders since February 2011.


In Wednesday’s speech Ayatollah Khamenei also invoked Iran’s support for Palestine against Israel and upheld the fortitude of Yemen’s people against Saudi intervention in the country’s civil war.

While some Muslim states betray Palestinian Cause, Iranians proved in #QudsDay rally they stand against enemies to revive #Palestine issue.

Returning to the domestic front, Khamenei repeated his warning of “sedition” to benefit Israel: “Enemies want to engage world of Islam in internal issues to give Zionist regime opportunity to pursue its malignant objectives.”

The Supreme Leader’s message was in contrast to that of President Rouhani on Twitter:

As we get together to celebrate #EidulFitr, let's pray for a world where all forms of life, esp human life, is treated with more dignity.

The Supreme Leader’s most important domestic statement may have been on the controversy over the excessive salaries of Government officials, which has taken over Iranian politics in recent weeks.

The scandal broke last month when Iranian media linked the payslips of officials which showed exorbitant pay, bonuses, and other perquisites. President Rouhani set up an enquiry, led by 1st Vice President Eshaq Jahangiri, which issued a report this week, and four heads of banks have already been fired.

In the past, there had been systematic neglect and mismanagement which should be watched closely by the different branches of government, the Judiciary and the Executive branches. Fortunately they have promised to address the issue.

Illegal payments made should be returned and the receivers of such salaries should be laid off from their positions. They enjoy no merit to make them fit to serve the public.

Rouhani summarized the findings of the Government enquiry in an open letter to the Iranian public on Monday. He promised to close legal loopholes permitting the “unusual payments” and vowed “to deepen fighting corruption…in the administrative and economic system”.

Taking a different line from its rival Boeing, US aerospace company Lockheed Martin has rejected reports that it is exploring business with Iran.

Last month Boeing confirmed a $25 billion deal to sell aircraft to Tehran, but Iranian media reported on Thursday that Lockheed is maintaining its refusal of any agreements.

Reuters said in early June that Lockheed, the largest arms manufacturer in the US, was seeking guidance from the Obama Administration over the sale of commercial helicopters to Iran through ts subsidiary Sikorsky. The vice president of sales and marketing for Sikorsky, Nathalie Previte, said that the company was consulting Washington: “I want to understand the US government’s policy about what can be done and what can we not do, and really clear everything with the U.S. government even before we start completing the analysis.”

Boeing said that its agreement with Iran Air, the Islamic Republic’s flag carrier, was reached “under authorizations from the U.S. government following a determination that Iran had met its obligations under the nuclear accord reached last summer”. It said that completion of the deal is “contingent upon U.S. government approval”.

While the US has lifted sanctions on Iran following January’s implementation of the July 2015 nuclear agreement, it has maintained other restrictions and has imposed new measures over Tehran’s ballistic missile testing.