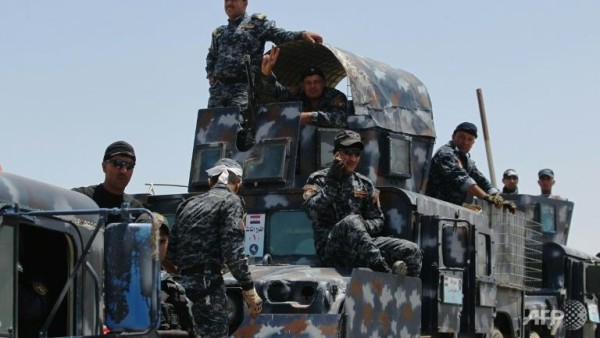 PHOTO: Iraqi forces gather on the outskirts of Fallujah on Sunday (Ahmad al-Rubaye/AFP)

Iraqi security forces and allied militia have begun the offensive against the Islamic State to recapture the city of Fallujah, west of Iraq’s capital Baghdad.

The long-anticipated battle began on Monday with ground assaults and airstrikes and mortar shelling of central districts. Some of the initial clashes were in the al-Hayakil area in the southern outskirts of Fallujah, and Iraqi forces also approached the northern suburb of Garma.

Fallujah, 50 km (31 miles) from Baghdad, was taken by the Islamic State, in January 2014. Five months later, ISIS rapidly expanded its hold of Iraqi territory with a lightning offensive that took cities such as Mosul and Tikrit.

In the past year, Iraqi forces and mainly-Shia militia have tried to regain other areas of Anbar Province, Iraq’s largest, including the provincial capital Ramadi.

Last week, the Iraqi offensive quickly took Rutbah, a strategic town on the ISIS supply line from Anbar to Syria.

A recent US military estimate said there are between 500 and 700 ISIS fighters in Fallujah.

Iraqi Prime Minister Haider al-Abadi, who has been battling political and economic crises, signaled th launch of the offensive with a visit late Sunday night to a command center overseeing operations.

Wearing the black uniform of an elite commando unit, Abadi said the offensive would be carried out by the army, police, counter-terrorism forces, local tribal fighters, and the militias.

Iraqi officials said the militias, including ones backed by Iran, may be restricted to operating outside the city to avoid sectarian tensions with Fallujah’s mainly-Sunni populations.

The Government has called on civilians to flee and said it would open safe corridors to areas south of Fallujah. Residents in the center said they had moved to relative safety in northern areas but roadside bombs were preventing them from leaving the city.

Iraqi and US officials estimate that up to 100,000 civilians still live in Falluja, whose population was about 300,000 before the Islamic State takeover.