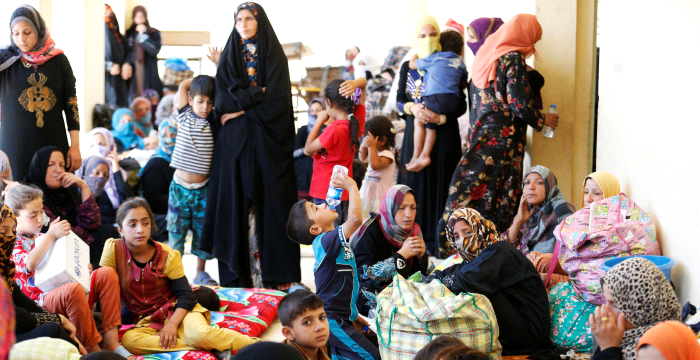 As Iraqi forces surround the Islamic State’s center of Fallujah in Anbar Province in western Iraq, about 50,000 civilians are believed to be trapped within the city. Last week Iraqi Prime Minister Haider al-Abadi delayed the offensive to retake Fallujah, purportedly because of concern over casualties among residents, with the Iraqi troops and militias concentrating on securing their positions on the southern outskirts.

However, even for those civilians who have risked getting out of Fallujah, the situation is far from assured. Tim Arango reports for The New York Times:

One of the Iraqi civilians who risked an escape from the sprawling battle for Falluja made it as far as the Euphrates River. He was there for all to see on Sunday morning: His body, tied to the side of a boat, bobbed in the muddy waters next to a rickety bridge that separates Baghdad from the violence of Anbar Province.

“Sheikh, sheikh, see this man! He drowned,” said a young boy, pointing, as he approached the window of a truck that was slowly crossing the bridge, carrying medicine. “See, see his body.”

The thousands of civilians who managed to flee Falluja and its outskirts and make it to government-controlled areas in recent days faced harrowing journeys, often at night and under fire from Islamic State militants who had been trying to use them as human shields.

Many crossed the wide Euphrates in makeshift boats, and local officials said more than a dozen drowned in the last few days, dying in their own country in the same way that thousands of Syrians and Iraqis have died on the seas trying to reach Europe.

The survivors arrive at aid camps tired, hungry, thirsty and scared — and their ordeals are far from over. They are now in the arms of a government without the resources to care for them.

“I risked my life because I was very concerned for my children and there was almost nothing inside Falluja — no food, no electricity, no fuel, nothing,” said a woman who arrived recently at a camp in Amiriyat Falluja, a government-held city south of Falluja, and gave her name as Umm Bariq.

But in the camp, she said, there are shortages of food, medicine and clean water. “So we are suffering here under difficult conditions,” the woman said. “We need help here.”

At least 50,000 civilians are still trapped inside Falluja under Islamic State rule — perhaps 20,000 of them children, according to the United Nations. Last week, the worry was that they would be killed in the crossfire as Iraqi forces and their Shiite militia allies stormed the city.

Now, as the fighting has stalled on the outskirts in the face of fierce resistance by the Islamic State, a siege lasting weeks or months, in the heat of summer, could lead to mass starvation. There have been frantic negotiations, through intermediaries, between international aid agencies and Islamic State officials inside Falluja, seeking to open up corridors to deliver food and medicine.

The problem is made worse, some aid workers say, by the Iraqi government’s tight control of traffic between Baghdad and Anbar Province, which has delayed the delivery of humanitarian supplies to the camps and the Falluja area.

Out of security concerns, the Baghdad government, which is Shiite-led, has long restricted the movement of people between the capital and Sunni-dominated Anbar, almost as if the two areas were separate countries. For some agencies, it can be difficult and time-consuming to receive permission from the Iraqi government to travel across the bridge and deliver aid.

In some instances, aid agencies have turned to a powerful Shiite militia, Kataib Hezbollah, which is controlled by Iran and in charge of an important checkpoint in Anbar, to get aid to the displaced.

Also, as the offensive for Falluja unfolded, the Iraqi authorities were eager to facilitate access for journalists to the front lines, but have not allowed them to travel to areas to see displaced civilians.

It was only because of an invitation to join a local aid agency’s convoy on Sunday that a reporting team from The New York Times was able to visit the camps for civilians fleeing the violence around Falluja.

The government-controlled areas of western Anbar Province, a Sunni-dominated region that has been a heartland for the Islamic State, have become vast wastelands of human suffering.

“But now we are facing another problem,” Mr. Shukur, 58, said. “Can you imagine your family living here in this heat?”

He waved his arm around the space where he and his family live, a small square of concrete floor, a metal frame and plastic sheeting for walls. On the floor, lying on a blanket, was his 8-month-old granddaughter, Rawan, flies buzzing around her as she slept.

Aid workers expressed frustration at their inability to meet the basic needs of civilians caught up in the war — there is not even enough fresh drinking water in the camps, officials said. There is always this question: Why is there always so much more money for military operations than for water and food for the civilians uprooted by them?