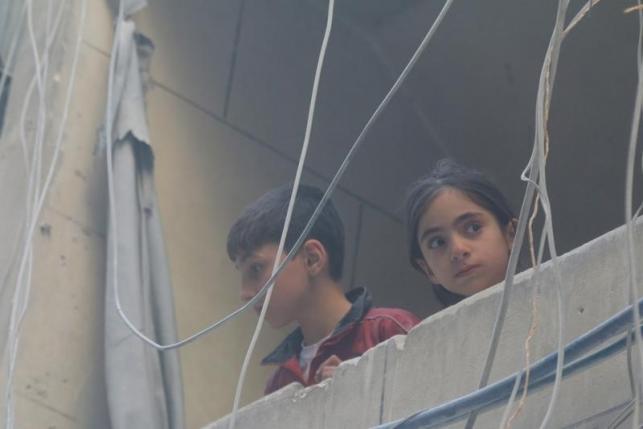 PHOTO: Children look out over a balcony damaged by Russia-regime airstrikes on Bustan al-Qasr in Aleppo (Abdelrahman Ismail/Reuters)

Who then will save the lives of civilians? Who then will lavish their necessary care? This week, in just two days, nearly four people were killed every hour of the day, and more than fifty injured during the same time. Our hospitals are at breaking point. The cessation of hostilities has failed and we feel the effects deep within ourselves.

The doctors cite Wednesday’s bombing of Al Quds hospital, with the loss of two colleagues among 55 casualties, and the killing of five White Helmets rescuers on Monday as they warn that “Aleppo might know a fate similar to that of Srebrenica”, the town in Bosnia where thousands of civilians were slain by Serbian forces in 1995.

They call on Russia to “honor its obligations in ensuring the end of airstrikes” and the US “to end its influence” to ensure supply routes remain open to the city.

ORIGINAL ENTRY: Despite the Assad regime’s proclamation of a “regime of calm”, Russia and Syria’s air forces continued their bombing of opposition-held areas of Aleppo city for a ninth straight day on Saturday.

Activists reported dozens of airstrikes in a campaign which has killed more than 250 civilian lives since April 21. The Local Coordination Committees documented 31 deaths on Saturday in and near Aleppo.

Among the targets struck were a water plant and a medical warehouse.

On Friday, the Assad regime announced the “regime of calm” for a renewal of the February 27 cessation of hostilities in Latakia Province on the Mediterranean and in the East Ghouta area near Damascus. The declaration was supported by both the US and Russia, after a discussion between Secretary of State John Kerry and Russian Foreign Sergei Lavrov.

However, the regime excluded Aleppo city, divided since July 2012, from the truce. Washington said it would continue discussions with Moscow, but did not press publicly for the ceasefire in all areas.

State Department spokesman John Kirby said on Saturday that Washington is working on “specific initiatives” to reduce violence, with Aleppo a top priority. He said Secretary of State Kerry had called UN envoy Staffan de Mistura and the coordinator of the opposition-rebel High Negotiations Committee, Riad Hijab, to express his “deep concern” and desire for “a durable, nationwide cessation”.

See Syria Daily: Has US Accepted Russian-Regime Bombing of Aleppo?

A message written on Friday in Aleppo’s rubble: 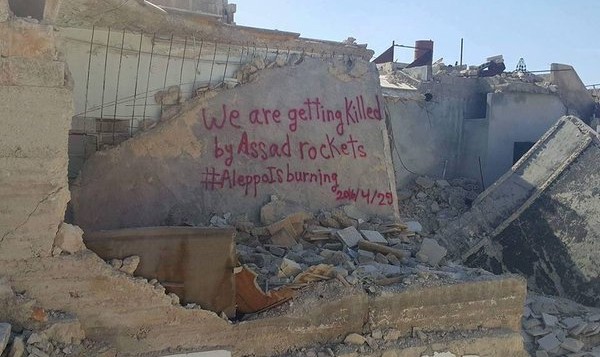 A vigil at Al-Quds Hospital, struck by two missiles on Wednesday night, killing 55 people and wounding more than 80 — “We are dying. Syria is dying. Aleppo is dying. Save Our Souls. SOS”:

A pro-regime website also said that the Syrian military and Hezbollah immediately resumed operations in the East Ghouta area, attacking the village of al-Rukabiyah, as soon as the 24-hour “regime of calm” expired.

The Assad regime said the ceasefire would last for 72 hours in Latakia.

Anas al-Abdah, the President of the Syrian National Coalition, said the opposition was ready to reinstate the cessation of hostilities, but reserved the right to respond with force to attacks.

Abdah asked the international group of the US, European, and Arab countries — the “Friends of Syria” to act to stop the Assad regime’s “war crime” in Aleppo. He put forward four proposals, including a timetable for lifting sieges and detentions, a plan for negotiations, and accountability for violations of the truce.

A statement by 54 rebel factions also rejected a partial truce and said the opposition-rebel High Negotiations Committee must boycott talks if there was no progress in ending sieges and detentions.

A man carries a baby after a Russian-regime airstrike on the al-Fardous area of Aleppo on Friday: 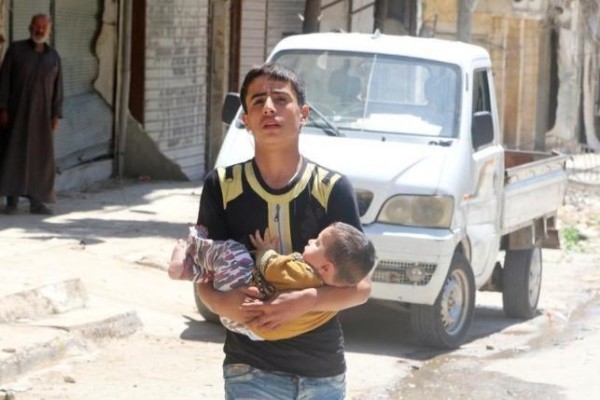 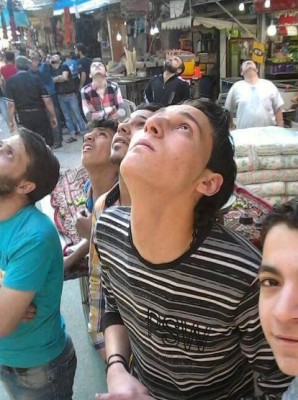 Rally in Cologne, Germany on Saturday, expressing solidarity with the civilians of Aleppo: 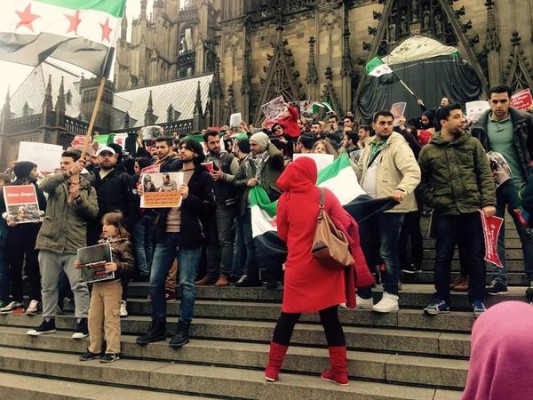 Video of a protest in East Ghouta, near Damascus, calling on rebels to end in-fighting which has cost lives and weakened defenses:

Jaish al-Islam, the leading rebel faction in the area, says it has been attacked by Faylaq al-Rahman and Jaish al-Fustat, which reportedly has links with the jihadists of Jabhat al-Nusra.

The demonstrators on Sunday also expressed solidarity with the civilians of Aleppo city under attack by Russian and regime warplanes.

ISIS has killed 18 people and wounded 60 in Kilis Province this year in cross-border rocket fire. Turkish armed forces have responded with artillery fire.

Last week, Turkish Foreign Minister Mevlut Cavusoglu said the US is positioning a multiple-rocket launcher on the border, trying to deter further attacks.