Syria Daily: Has US Accepted Russian-Regime Bombing of Aleppo? 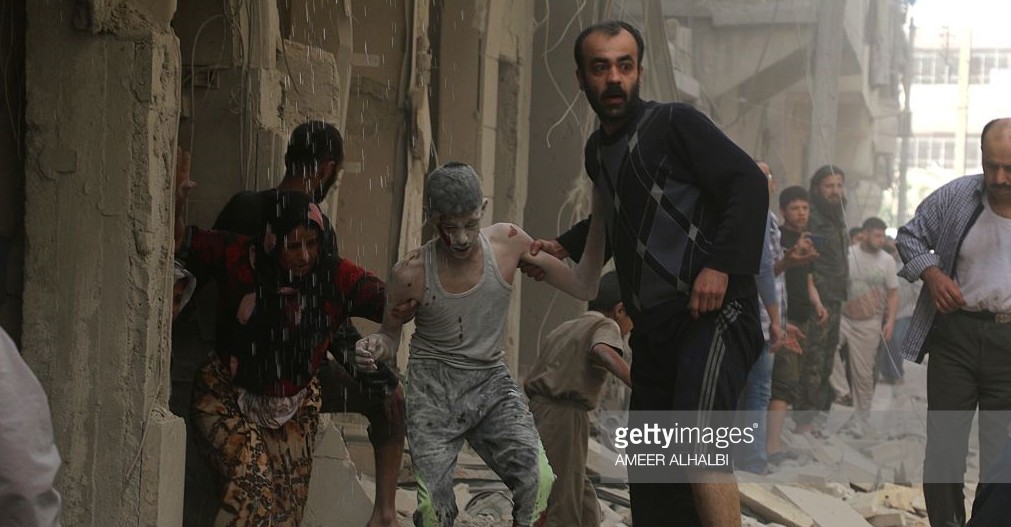 PHOTO: A victim is led away from a Russian-regime airstrike on Aleppo city on Tuesday

The White Helmets said it verified 189 deaths, including 43 women and 40 children, and at least 394 injured in more than 260 raids.

There were also 65 barrel bombs, 18 surface-to-surface missiles, and dozens of artillery shells.

ORIGINAL ENTRY: The US and Russia declared on Friday that they are supporting local truces to revive a February 27 cessation of hostilities, but the arrangement excludes Syria’s largest city Aleppo — where Russian and regime forces are carrying out a sustained bombing campaign that has killed scores of civilians since April 21.

After a consultation between Secretary of State John Kerry and Russian Foreign Minister Sergei Lavrov, the two sides announced the truces for Latakia Province in western Syria and the East Ghouta area near Damascus.

“Our hope is by refreshing this agreement…we can build momentum again toward a broadly observed cessation of hostilities,” White House spokesman Josh Earnest said.

Significantly, Russia presented the agreement as one coordinated with President Assad.

Lieutenant General Sergey Kuralenko said, “The Russian and US sides in concurrence with the Syrian leadership are introducing a ‘regime of silence’ in northern part of Latakia Province from 12:01 am local time on April 30, 2016.”

Perhaps more importantly, the Russians made no reference to Aleppo city or the surrounding area, where it renewed bombing on opposition districts alongside the Syrian Air Force’s attacks. Hundreds of people have been killed in nine days.

The assault has included two missiles which destroyed one of the last hospitals in opposition-held Aleppo city, killing at least 55 people, and a barrage of strikes and a missile on a White Helmets civil defense center, killing five rescuers.

Video: The aftermath of the bombing of the MSF-supported #AlQuds hospital in #Aleppo, #Syria. #pnpcbc #NotATarget pic.twitter.com/BZWgPeUG4G

The Local Coordination Committees documented the deaths of 37 people in Aleppo on Friday, amid attacks on areas such as ‎Bustan_al-Qasr‬, ‎Sakhour‬, and ‪‎Bab Hadid‬. A water plant was attacked, threatening the supply in opposition areas, and a first aid clinic and medical warehouse was destroyed.

A statement from US envoy Michael Ratney headlined the “general cessation” in Latakia and East Ghouta, but only said about Aleppo that “persistent violations and attacks on civilians…are unacceptable” and that Washington would continue discussions with Russia.

Kuralenko played down any problem over Aleppo, saying, “There’s no ‘slipping’ to the resumption of hostilities. Peaceful life is returning to towns and villages, allowing reconstruction of damaged infrastructure and provision of humanitarian assistance to begin.”

He insisted that 74 towns and villages, including in Aleppo Province, had contacted the “Russian Center for Reconciliation” to confirm a desire to end hostilities.

The Syrian military was blunter, saying the “regime of silence” would not include a halt to operations in Aleppo.

US: “Not Part of Any Acquiescence at All”

A US official tried to reassure, “We are working on all of the areas, it’s not just about Latakia and eastern Ghouta, but also about Aleppo and other areas where we see problems or potential problems that we’re trying to get this cessation of hostilities back on track.”

State Department spokesman Mark Toner said, “The situation around Aleppo is urgent, and so we need to address that, and we have been trying to address that on the ground. This is not part of any acquiescence at all.”

However, Washington appeared to support the Russian pretext for attacks with the misleading claim of a presence in Aleppo city of Jabhat al-Nusra, the Al Qa’eda-linked group that is excluded from the cessation of hostilities.

A US official said on Friday, “There is a Nusra presence in Aleppo. Nobody is saying that there isn’t.”

It was unclear whether the official was referring to Aleppo city — where Nusra has no forces — or the province, where the group has been fighting alongside rebels on a front south of the city.

Last week Colonel Steve Warren, the US military spokesman in Baghdad, said, “It’s primarily al-Nusra who holds Aleppo, and of course, al-Nusra is not part of the [February 27] cessation of hostilities.”

Russia then set the condition that any opposition faction must “separate” itself from Nusra or face attack. US officials, including Secretary of State Kerry, echoed the demand for separation.

The spokesman for the Ahrar al-Sham rebel faction offered this response via Twitter:

What kind of political process is #Geneva when one sponsor and one participant are war criminals?#AleppoIsBurning pic.twitter.com/mA5rGbarch

State news agency SANA claimed on Friday that 16 civilians had been killed and 41 wounded by “terrorist rocket attacks” on regime-held areas of Aleppo, but again failed to produce evidence beyond the citation of a “source at Aleppo Police Command”.

Syrian State media have asserted that more than 80 people have died in the shelling since Monday. Russia’s State outlet RT supported the claim on Thursday by falsifying video of the victims of a Russian-regime attack on the opposition area of Bustan al-Qasr. Stealing the footage of pro-opposition journalist Hadi al-Abdallah, they replaced his report with commmentary declaring that the images were of a regime neighborhood hit by shells.

And so did BBC Arabic:

On Friday, Russian outlets declared a mortar attack on Moscow’s consulate in Aleppo. A video declared 30 killed and 100 wounded by rebel attacks, but only showed broken windows, pockmarked walls, and firemen dousing damaged cars with water.

The opposition Local Council of Aleppo says that the Kurdish police arrested its chair, Britta Haji Hassan, on Thursday.

The Council said the detention was near the Kurdish canton of Afrin, northwest of Aleppo city. It called for Hassan’s immediate release, with an apology and explanation.

The YPG and Syria’s rebels have battled in the last three months in northern Aleppo Province. In the latest incident, almost 50 Free Syrian Army fighters were killed when an ammunition truck exploded in their assault on the town of Tal Rifaat, taken by the YPG in February.

The YPG subsequently paraded the bodies on the streets of Afrin, an action denounced by the Syrian Kurdish Council as a “barbaric and ruthless act”.

Report: US Vetoes Aid and Movement of Rebels to Fight Islamic State in Northern Syria

The Syrian opposition is claiming that US officials have vetoed aid and movement of rebels to fight the Islamic State in northern Syria.

The opposition members told Asharq Al-Awsat newspaper that Turkey had requested the despatch of 1000 fighters from Ahrar al-Sham and the Sham Legion across the border, but the US officials in the operations room in southeast Turkey objected.

The opposition said the veto was part of a general US block on the transfer of arms and ammunition, both in the north and the south, to “give the Geneva [political] negotiations room”.

Local sources have supported the claims in correspondence with EA.

The opposition also said that a “Gulf country ambassador” had notified its delegation in Geneva of willingness to send weapons, including MANPADS anti-aircraft systems, but Washington refused any access into Syria.