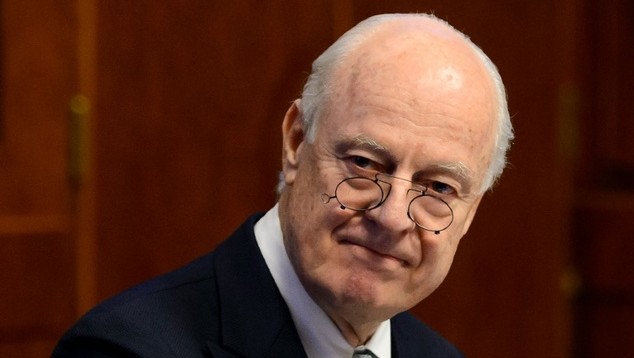 Video: “Have Aid Come” — Besieged Darayya in the Eyes of Its Children

No renewed talks for a resolution in Syria are expected for at least two or three weeks, according to the office of UN envoy Staffan de Mistura.

De Mistura’s office issued a statement on Thursday, after the envoy consulted the Security Council for about 2 1/2 hours.

It said de Mistura wanted to see progress on the ground, particularly relating to the cessation of hostilities and humanitarian access: “Meanwhile, the special envoy will maintain close and continuous contact with the Syrian parties as well as the members of the ISSG [International Syria Support Group] before determining the ‘appropriate time’ to reconvene the parties to Geneva.”

A February 27 cessation of hostilities, brokered by Russia and the US, has broken down in northwest Syria and in areas near Damascus. After initially allowing aid to some besieged areas, the Assad regime has tightened blockades, leading to a sharp drop in assistance in April and May.

The UN’s humanitarian coordinator Jan Egeland said that the situation is “horrendously critical” in some areas, with children facing death in the Damascus suburbs of Darayya and Moadamiyah and the opposition-held district of al-Wa’er in Homs city.

On Thursday, local councils in opposition areas near Damascus and in Homs called on the opposition-rebel High Negotiations Committee to refuse talks with the regime until sieges were lifted.

The last round of political talks were held in Geneva in mid-April. They made no progress after President Assad said that he would never accept a transitional governing authority, the centerpiece of international proposals since June 2012. The regime also continued to bombard opposition-held areas, despite the cessation of hostilities, and refused any release of political detainees.

The council in Darayya, southwest of Damascus, said that all basic services have been cut while the Syrian military bombs and shells the town.

Two weeks ago, the Syrian military blocked a UN convoy bringing the first aid to Darayya since November 2012. Pro-Assad forces then shelled and bombed the town, while pursuing ground operations in an attempt to overrun it.

Earlier on Thursday, de Mistura had said that he expected to announce a date for a new round of talks after consulting the Security Council.

The US Ambassador to the UN, Samantha Power, said that the envoy “expressed his continued frustration with insufficient humanitarian access, the serious dangers to the cessation of hostilities, and the need for real progress on the political talks”.

Power called on Moscow to use its influence to give hope to the process: “Russia has a special responsibility to press the Assad regime to abide by the cessation of the hostilities and end its bombardment and siege of innocent civilians.”

De Mistura said that, if the regime blocked airdrops of aid — proposed earlier this month by the UN’s World Food Program — he “will personally raise” the issue with the US and Russia to find a way for compliance.

Meanwhile, Russia eased its position on the opposition-rebel High Negotiations Committee on Thursday, accepting its legitimacy and even offering some praise for Saudi Arabia for helping organize the bloc.

I am certain that our friends from the Cooperation Council for the Arab States of the Gulf, including Saudi Arabia, are interested in holding the next round as soon as possible and in the general acceleration of the intra-Syrian negotiating process with a view to approaching the fulfilment of the tasks set by the UN Security Council….

Saudi Arabia, [and] personally [Foreign Minister] Adel al-Jubeir, have done a lot to form a delegation of the opposition, which is sufficiently representational and along with another couple of groups is a key player at the Geneva talks with the government.

Since the Geneva talks started in January, Russia’s emphasis has been on the inclusion of other delegations in the discussions, including the Kurdish Democratic Union Party (PYD) and Syrian politicians close to Moscow. The Russians have also tried to exclude elements of the High Negotiations Committee, such as the rebel group Jaish al-Islam, by declaring them “terrorist”.

However, with Russia facing questions over the depth of its military support for President Assad and with no advance in political discussions, Moscow appears to be reviewing its position.

Lavrov said yesterday, “Now there have been reports that such a round of talks will hardly be called before the holy Muslim month of Ramadan [June 11-July 10. We are unhappy about that, let us be frank.”

The Russian Foreign Minister appeared at a press conference alongside Saudi Arabia’s al-Jubeir at meeting of the Russia-Gulf Cooperation Council strategic dialogue.

A bombing near a mosque in opposition-held Idlib city has killed at least five people and wounded 20:

In initial death toll 5 civilians were killed and 20 injured by car bomb which exploded near Shuaib mosque in #Idlib pic.twitter.com/4laJUUiqyR

A bomb in a small car was detonated as worshippers were leaving Friday prayers.

Eight of the victims were in a bakery.

Russian and regime warplanes have been carrying out strikes as ground troops try to seize territory to cut off the only route into opposition-held Aleppo.

Graphic pictures have been posted of victims. 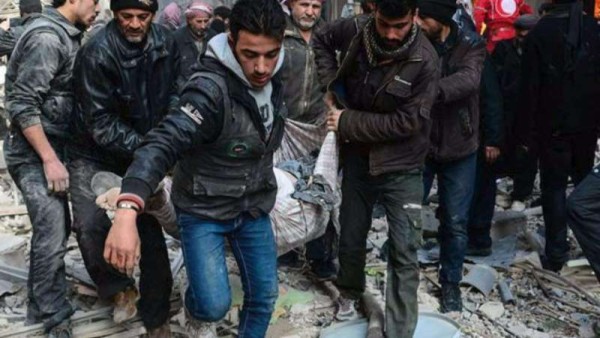 The Islamic State has gained ground from rebels in the back-and-forth battles in northern Aleppo Province, cutting links between two key opposition towns.

ISIS claimed four villages on Thursday. The advance separated rebels in the frontline town of Mare’ from those in Azaz, to the west near the Turkish border.

ISIS has captured Kaljibrin and cut off Marea town pic.twitter.com/APmZSK5oIe

Local sources say that the Turkish military has fired artillery on the Islamic State, but that rebels need close air support to push back the ISIS challenge.

The sources also note that the Islamic State is now close to the Bab al-Salameh crossing with Turkey, which has been closed since last year. That could put about 100,000 displaced Syrians in jeopardy — having fled fighting in northwest Syria earlier this year, they are in camps near the border.

BREAKING: We are evacuating team & patients from our Al Salamah hospital in north #Syria after IS offensive in #Azaz. #NotATarget

The two sides have been at war since January 2014, but battles along the Mare’ frontline escalated early this year.

A deal with Kurdish militia has allowed the resumption of fuel deliveries into opposition-held northwest Syria after weeks of a blockade on trucks coming from Islamic State-controlled territory.

Hundreds of trucks had been parked in the Kurdish-held Afrin canton, but some began moving on Thursday. The new route bypasses the rebel-occupied area near Azaz on the Turkish border, allowing the Kurdish militia YPG to monitor the movement.

The price of diesel, which had doubled in opposition-held Idlib Province in the last month, fell on Wednesday.

Rebels Hit Back at Regime, Advance in West Ghouta

Striking back after weeks of pressure by pro-Assad forces, rebels have taken a village on the battlefront in West Ghouta, suthwest of Damascus.

Rebels moved into Deir Khabiya, just to the east of the town of Khan al-Shih. They claimed that they killed or wounded dozens of pro-Assad troops and seized two tanks, two BMP armored vehicles, and a vehicle-mounted Shilka weapon system. 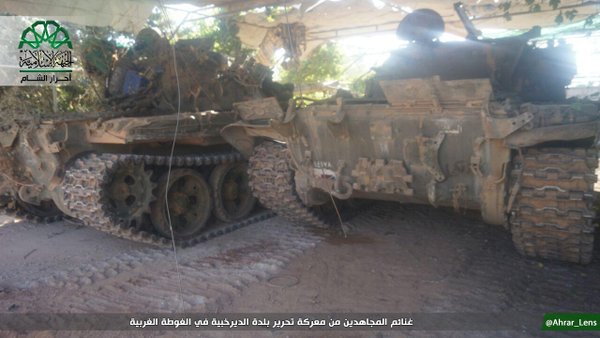 Deir Khabiya is to the south of the besieged towns of Moadamiya and Darayya — the latter is currently being bombed and shelled by the Syrian military as it tries to enter.