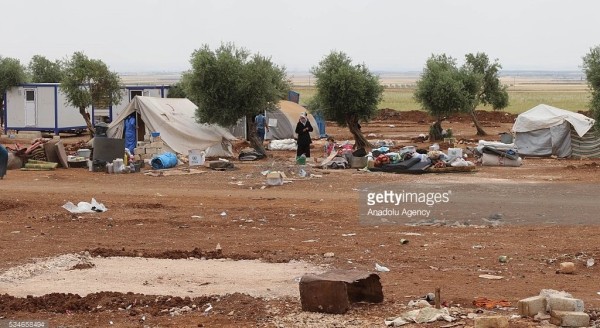 PHOTO: Syrians gather belongings as they leave a refugee camp because of nearby Islamic State attacks in northern Aleppo Province on Friday (Getty)

UPDATE 1000 GMT: Rebels claim that they have repelled an Islamic State attempt to enter the town of Mare’, inflicting heavy casualties.

Photos have been posted of rebels with a row of bodies of ISIS fighters.

Claimed footage of an ISIS vehicle bomb struck before it reached the intended target:

IS VBIED blown up near Mare3 before reaching target pic.twitter.com/DthAzvN2Ol

ISIS claimed four villages on Thursday. The advance separated rebels in the frontline town of Mare’ from those in Azaz, to the west near the Turkish border.

ISIS has captured Kaljibrin and cut off Marea town pic.twitter.com/APmZSK5oIe

Some reports put the Islamic State within 5 km (3 miles) of Azaz.

Local sources said that the Turkish military fired artillery on the Islamic State, but that rebels need close air support to push back the ISIS challenge.

The sources noted that the Islamic State is now close to the Bab al-Salameh crossing with Turkey, which has been closed since last year. That could put about 100,000 displaced Syrians in jeopardy.

Footage of the fighting, reportedly near the crossing:

The refugees fled fighting and bombing in northwest Syria earlier this year, amid rebel battles with pro-Assad forces, Kurdish militia, and ISIS. Unable to cross into Turkey, they are in quickly-constructed camps near the border.

The International Rescue Committee said another 20,000 people were displaced by the latest fighting, and that more than half the residents of a camp had moved elsewhere. The Kurdish outlet Hawar News said that more than 6,100 of the displaced had arrived in the Kurdish canton of Afrin.

BREAKING: We are evacuating team & patients from our Al Salamah hospital in north #Syria after IS offensive in #Azaz. #NotATarget

Rebels and the Islamic State have been at war since January 2014, but battles along the Mare’ frontline escalated early this year.

The opposition Local Coordination Committees documented 86 deaths on Friday, including 19 children and 11 women.

Sixty-three of the casualties were in Aleppo Province, including victims of regime airstrikes and shelling in Hreitan (see Friday’s Syria Daily), Anadan, and Kafr Hamra and those slain in the Islamic State’s offensive in northern Aleppo.

The bakery that was struck in Hreitan, killing eight people:

The UN has repeated its demand for access to besieged areas across Syria.

The continued use of siege and starvation as a weapon of war is reprehensible.

Based on the latest information, we now estimate that some 592,700 people are currently living in besieged areas.

O’Brien said most of the blames lies with the Assad regime, which has tightened blockades in April and May.

The official said that the UN has asked for access to 35 areas in May, but that the regime consented in only 14 cases with partial access in another eight.

He also noted, “The removal of life-saving medicines and medical supplies such as surgical kits, midwifery kits, and emergency kits has continued unabated, with supplies for an estimated 150,000 treatments removed from convoys since the beginning of the year.”

O’Brien’s statement is the latest in a series of warnings by high-level UN officials. The humanitarian coordinator, Jan Egeland, said on Thursday that the situation is “horrendously critical” in some areas, with children facing death in the Damascus suburbs of Darayya and Moadamiyah and the opposition-held district of al-Wa’er in Homs city.