Continuing its fightback against the Assad regime after defeats earlier this spring, the Islamic State attacked in Deir ez-Zor city in eastern Syria on Saturday.

Using mortars and a car bomb alongside the ground offensive, ISIS took control of the Assad hospital, in the center of the pro-Assad forces’ area in Deir ez-Zor. The Islamic State also reportedly seized granaries, a fuel storage facility, part of Fourat University, the Panorama Roundabout to the south of the city, and nearby hills.

The advance threatened to cut the Syrian military’s area of control into three pockets: one in the city, one around the airport, and one near a base to the south.

Syrian State media claimed on Saturday that the regime forces had fought back and regained the Assad Hospital. 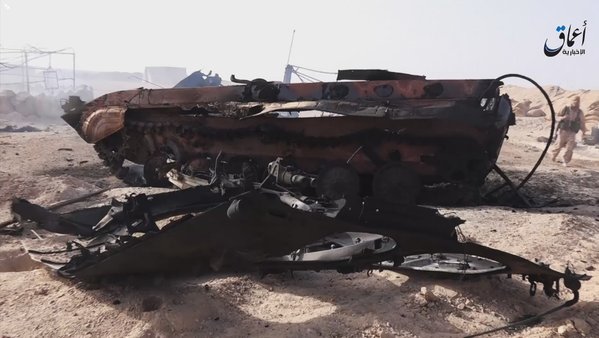 The Syrian military has occupied most of Deir ez-Zor, Syria’s 7th-largest city, but ISIS has surrounded the area and about 200,000 people since 2014.

Pro-Assad forces appeared to have seized the upper hand over the Islamic State earlier this year. They broke the siege of the Kuweires airbase in eastern Aleppo Province and then regained the historic city of Palmyra in Aleppo Province in late March.

However, ISIS has fought back in the last month across Aleppo, Hama, and Homs Provinces. In the past two weeks, the Islamic State has captured the gas fields of al-Sha’ar and al-Maher in eastern Homs Province, threatened to cut the Homs-Palmyra road, and advanced on the T4 airbase, one of the regime’s largest and host to Russia warplanes including attack helicopters.

The Islamic State’s Amaq claimed on Saturday that ISIS shelling of the T4 airbase destroyed four Russian helicopters, 20 trucks, and ammunition in a large explosion.

Supporting Iran’s escalating intervention in Syria, the Foreign Ministry has said that Tehran will continue “military advisory services” to the Assad regime.

Spokesman Hossein Jaberi Ansari spoke to reporters on the sidelines of a Saturday ceremony for Mustafa Badreddine, Hezbollah’s commander in Syria who was killed on Thursday night.

Jaberi Ansari said Iran, which has put in more commanders and troops since Russia began aerial operations last October, will persist “as long as foreign intervention continues on the ground in Syria”. He gave full backing for the Lebanese organization, which has been involved with Iran and Iranian-led foreign militias in ground offensives for the Assad regime:

Hezbollah has invested all its prestige and resources in fighting Zionist regime. Falling of its commanders and leaders will not definitely demoralize Hezbollah in its path….We hope the terrorism which claims to be Islamic, finds the Zionist regime the sole enemy of Islam.

Hezbollah’s Badreddine died in mysterious circumstances, with the organization giving conflicting accounts over whether he was killed by an Israeli missile strike or a Syrian rebel artillery attack.