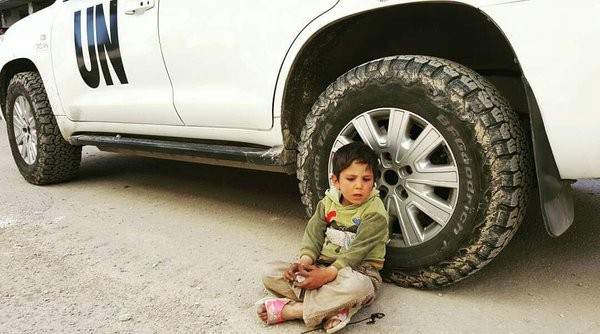 PHOTO: A boy sits by a UN vehicle during an official visit to the besieged town of Darayya on Sunday

Developing: Opposition-Bloc Rebel Suspends Formal Involvement in Talks
Analysis: The Resurrection of America’s Favorite Rebel Commander?
“I Accept This Award for All Journalists Who Refused to Be Propagandists”

A senior UN official has visited besieged Darayya, the Syrian town where thousands are enduring lack of food and medical care, and apologized that the organization was “late” in dealing with the Assad regime’s blockade.

However, the head of the UN envoy’s office in Damascus, Khawala Matter, was not accompanied by an aid convoy and could not offer any prospect of assistance in the near-future.

Matter told women and children, many of whom have been protesting their lack of food and medicine in the town southwest of Damascus:

We listen to your news. No one has forgotten you. your suffering is reaching us. We will alleviate your pain by God’s will.

The official continued in a brief meeting with the local council and rebel representatives, “I would like to apologize in the name of the entire UN Syria team….“We were late but today we have seen the extent of this tragedy and suffering.”

The Syrian military has maintained a siege since late 2012 and tightened it this winter by cutting a road to nearby Moadamiya, also under threat of starvation. Despite a February 27 cessation of hostilities, the Assad regime has not allowed aid agencies into the town. The head of UN aid operations, Stephen O’Brien, told the Security Council earlier this month of the threat to thousands of civilians.

See Syria Feature: Appeal by Women of Besieged Darayya — “There is No Food”

Issam al-Reis, a Free Syrian Army spokesman, reacted on Twitter with a reference to the ongoing UN-brokered talks for a political resolution:

Your dusty tyres entered Darayya but you came empty handed & you left [us] behind after 3 yrs of siege, still waiting.

If the UN failed to let one crumb of biscuit enter Darayya, how are they capable of achieving political transition or transitional justice?

Anti-Assad Protest in Suwayda in Southeast

A parade in the mainly-Druze Suwaida Province in southeast Syria turned into a protest against the Assad regime on Sunday, according to citizen journalists.

People had gathered to commemorate the 70th anniversary of Syria’s independence from France. But about 200 marchers replaced a portrait of former Syrian President Hafez al-Assad with that of an early 20th-century Druze leader, Sultan Pasha al-Atrash.

Atrash led a popular uprising against French rule in 1925 and participated in the Independence Intifada of 1945 that precipitated France’s withdrawal from Syria.

A statue of Hafez al-Assad was pulled down in Suwayda’s central square last September following the assassination of Sheikh Waheed al-Balous, the head of the Sheikhs of Dignity, a religious and political movement seeking to protect Suwayda from any outside aggression.

Sunday’s protesters shouted slogans such as “Syria is ours and not the Assad family’s” and “Live Syria! Fall Bashar!” as they marched from the square to the town of Mazra, 8 km (5 miles) to the northwest.

Protests are common against high prices and regime policies such as the conscription of local men and the arbitrary firing of state employees, but this was the first time protesters called for the fall of the regime since the assassination of Balous last September.

Rebels Look to Offensive in Hama and Latakia Provinces

Rebels have announced the formation of a joint operations room in western Syria, pointing to possible offensives in Hama and Latakia Provinces.

The Islamic Front circulated the statement on Sunday. It said rebels were responding to breaches of the ceasefire by regime forces, including targeting of camps for displaced Syrians and shelling of residential areas.

Last week the jihadists of Jund al-Aqsa captured grain silos near Mansoura in Hama Province. Rebels and Jabhat al-Nusra have also indicated that they might try to retake territory in northern Latakia Province that was claimed since last autumn by the Syrian military and foreign allies, enabled by Russian airstrikes, since last autumn.

Factions included in the operations room include Ahrar al-Sham, Jaish al-Islam, and the Sham Legion.

Fighting is reported this morning in western Hama Province in the al-Ghab Plain, bordering Latakia. Territory has changed hands several times in the area since a rebel advance took almost of Idlib Province last spring.

Reports indicate that the offensive has already taken Hakoura in the al-Ghab Plain. 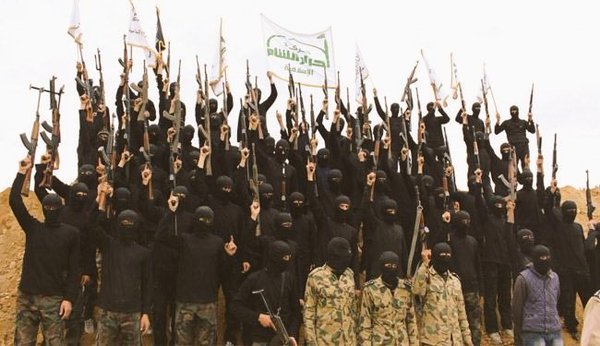 A pro-regime site has said that the Syrian military has cancelled further operations to advance along the highway from Palmyra in Homs Province, captured last month, to the Islamic State-held areas of Deir ez-Zor Province. Units moved toward the Hama-Latakia fronts include the Desert Hawks Brigade and the Panther Forces.

Rebels looking upon an explosion in Khirbet al-Naqous in eastern al-Ghab Plain: 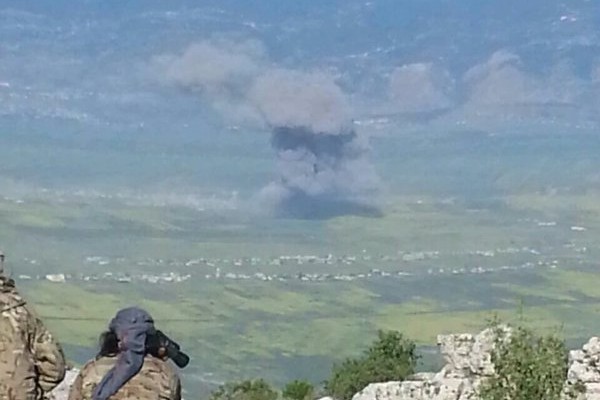 Fighter with a MANPADS anti-aircraft weapon in the Jabal al-Akrad mountains in Latakia Province: 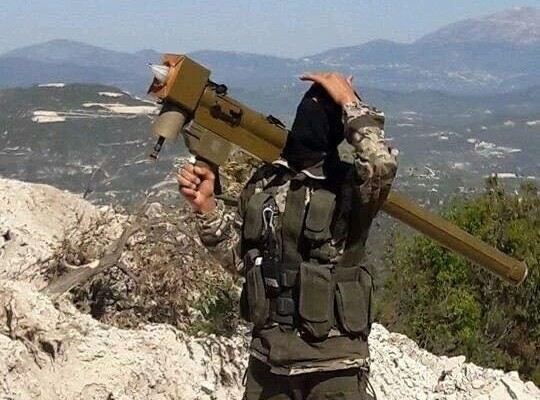 Rebels and Nusra launched an offensive south of Aleppo city in early April, pushing back regime-Russian-Iranian-Hezbollah advances. Areas taken include the town of al-Eis, on the Aleppo-to-Damascus highway, and surrounding hills.