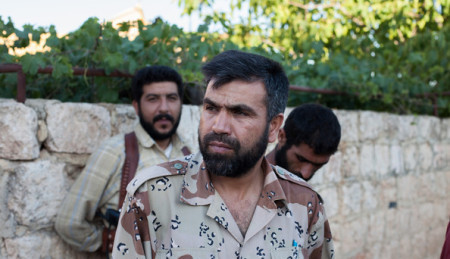 PHOTO: Jamal Maarouf — A Commander Undone by His Own Corruption and US Airstrikes?

Last month, just in time for the 5th anniversary of the Syrian uprising, Jamal Maarouf — former commander of the Syrian Revolutionary Front and one-time “moderate” favorite of US officials — turned to the public for support. He condemned the Assad regime, the jihadists of Jabhat al-Nusra, and the Islamic State. He criticized the Turkish Kurdistan Workers’ Party (PKK) and its Syrian affiliate, the Democratic Union Party (PYD), saying they have to be distinguished from the local “noble Syrian Kurds”. He then announced, “We are going to continue the revolution and reach its aims”.

But is Maarouf’s maneuver a way to “continue the revolution”? Or — having made foes not only among the regime, the Islamic State, and the PKK/PYD but also among Syrian rebels — was this the plea of an isolated and irrelevant figure, desperately seeking an American lifeline?

The Rise of a Commander

The former construction worker was among the first wave of the armed uprising against the Assad regime in late 2011. Two years later, he was the face of a “moderate” rebellion for many in the international media, encouraged by officials in the Obama Administration. However, in the words of Kyle Orton, a Syria-watcher at the Henry Jackson Society, “The sad fact is that Maarouf became everyone’s scapegoat.”

Maarouf’s banditry was one side of the coin that led to the dismantling of his militia and forced him to flee into Turkish exile. The other was the circumstances that made him a welcome target.

By the end of 2013, the US wanted a secular leader to counter the foundation of the Islamic Front, an Islamist rebel alliance formed in November 2013 that had already established influence across Syria, particularly in the northwest. They saw it in Maarouf’s Syrian Martyrs Brigade.

The deal was political as well as military. A new round of international talks in Geneva was to begin in early 2014. In return for support of his campaign for leadership in Idlib Province in the northwest, Maarouf backed the peace talks. He was even photographed with Ahmed Jarba, then President of the Syrian National Coalition and one of the negotiators in Geneva, who paid a visit to the SRF in Idlib. The Coalition countered the accusation that it had no base inside Syria, while Maarouf presented his anointment as the favored local commander.

Maarouf’s positioning put him at odds with parts of the opposition that disliked the Geneva process. But he could argue that he was the key to the US support that rebels had sought for a long time. Together with other Free Syrian Army battalions, his Syrian Martyrs Brigade formed the Syrian Revolutionary Front. Closely aligned with the Hazzm Movement, a rebel alliance that also enjoyed US support, both groups received funding, training, and weapons that included BGM-71 TOW anti-tank missiles.

The Fall of a Warlord?

The Syrian Revolutionary Front not only was at odds with Islamist groups but also with nationalists. Rebel commanders accused the SRF of corruption, theft, and war profiteering, thus betraying the revolution.

In autumn 2014, Jabhat al-Nusra consolidated its influence in Idlib Province, launching a popular campaign against corruption that targeted the SRF. The jihadists had another motive for their challenge: they were ready to fight US-backed factions after Washington began targeting Nusra in airstrikes from late September, killing dozens of fighters.

Heavy clashes between the SRF and Nusra erupted simultaneously with a rebel offensive against Idlib city, including accusations that the SRF leadership did not participate and claims that frustrated fighters were defecting to other brigades. It is not clear who exactly started the raids, but in the following days JAN attacked the SRF’s positions and those of the Hazm Movement, who tried to block jihadist reinforcements. The Islamic Front as well as the Free Syrian Army called for a ceasefire. However, as Orton summarizes, they “had little incentive to defend [Maarouf] against Jabhat al-Nusra, and for similar reasons the nationalists had little reason to identify themselves with somebody who had become at once a symbol of the continuing power of FSA-style opposition and the degradation of those groups into theft and corruption”.

Maarouf’s lack of supporting factions led to a quick defeat. After a few days, Nusra and the Islamist group Jund al-Aqsa had pushed both the SRF and the Hazm Movement out of their strongholds in northwest Syria. Maarouf resorted to insults, calling Nusra “Jabhat al-Kusra“ — “Kuss” is Arabic for vagina — and Nusra’s head Abu Mohammad al-Julani a Kharijite, a Muslim who declares others as infidels and seeks to kill them. Nusra offered a ceasefire but demanded that the SRF leadership must appear before a Sharia court in Idlib Province that was dominated by Nusra’s associates. Maarouf fled to Turkey while most of his fighters joined other groups.

Little has been heard from Maarouf since then. However, former members of the SRF and the Hazm Movement formed the faction Jaish al-Thuwar, which allied with the Syrian Democratic Forces, dominated by the Kurdish militia YPG.
Rumors have connected Maarouf with Thuwar, but both sides have denied any affiliation. In his video address, Mr. Maarouf disavowed Thuwar by calling them traitors, as well as denouncing the Turkish Kurds of the PKK as terrorist.

The former commander’s way back lies in the appeal to the “noble” Syrian Kurds who are not connected with the PKK or with the YPG and its political leadership, the Kurdistan Democratic Party (PYD). But for now the PYD and the YPG are the leading Kurdish entities because of military resources and territorial control. So, although there is an unforeseen shift in power, Maarouf is left with no significant alliance to re-enter Syria.

Maarouf clearly believes “never say never” about his return to Syria. But without a political foothold, he appears to have no plan to remove the stain of corruption, as well as battlefield defeat, that brought his downfall.

Undone by the Americans?

Maarouf may always have been at a disadvantage in the military politics of Syria’s northwest. “He did not have the reliable sources of funding the Salafists could rely on,” Kyle Orton points out.

However, his biggest — and continuing — obstacle may be farther away. The American blessing — The Washington Post’s David Ignatius anointed him as the “rebel with a cause” — that he was given in late 2013 has become a curse.

Put bluntly, the commander was collateral damage from the US decision to hit Jabhat al-Nusra with airstrikes from autumn 2014. Those attacks were not only opposed by Nusra but by rebel factions and by local civilians, some of whom died in the raids.

Maarouf was now more than a supposedly corrupt warlord. He was a lackey of a US which — having stepped back from significant intervention against the Assad regime — was now attacking not only the Islamic State but also Nusra. His forces were soon defeated, and his credibility as an effective and independent commander was gone.

Eighteen months later, a video message is likely to do little to rescue Jamal Maarouf from that predicament.