Syria Daily: Deaths on Both Sides of “Catastrophic” Aleppo 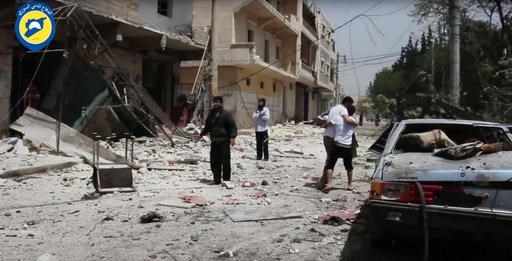 PHOTO: Damage from a Russia-regime airstrike on an opposition area of Aleppo city

UPDATE 1600 GMT: Aftermath of an airstrike on the al-Neirab water station in Aleppo:

UPDATE 1630 GMT: Curiously, the US envoy for Syria, Michael Ratney, downplays Aleppo in a statement calling for a “general recommitment” to the February 27 cessation of hostilities.

The statement is titled “Recommitting to the Cessation of Hostilities in Latakia and Eastern Ghouta”, calling on all parties in the areas — Latakia Province on the Mediterranean and East Ghouta near Damascus — to refrain from fighting and adhere to the ceasefire.

Only then does the statement add the note that “persistent violations and attacks on civilians in Aleppo…are unacceptable”.

UPDATE 1445 GMT: For the first time, Friday Prayers have been cancelled in the opposition-held areas of Aleppo city because of fears for safety amid the Russian-regime airstrikes.

The order was issued by the Majlis al-Sharia for Aleppo.

State news agency SANA says 16 civilians were killed and scores wounded in “terrorist rocket attacks” on regime-held sections of the city on Friday.

UPDATE 0930 GMT: The White Helmets civil defense organization has confirmed the death toll from Wednesday night’s Russian-regime attack on one of the last hospitals in opposition-held Aleppo city:

It has now been 24 hours since we started working at the AlQuds hospital after 3 airstrikes. 55 killed, 60 injured. #humanityindepravity

ORIGINAL ENTRY: Killing continued on both sides of Syria’s divided city of Aleppo on Thursday. Russian and regime warplanes carrying out more airstrikes on opposition territory, while State media claimed the deaths of civilians from rebel shelling of regime areas.

The Russian and Syrian air forces struck for an eighth straight day on neighborhoods including Bustan al-Qasr, Kallasa, and Sakhour. The Local Coordination Committees documented 73 deaths in and near Aleppo on Thursday.

The LCC recorded 131 deaths across Syria, with another 22 in Homs Province and 15 in Hama Province.

State news agency SANA claimed 22 people were killed and at least 88 wounded on Thursday by rebel shelling of regime districts such as Midan and Ashrafiyeh.

State media has said that shelling escalated from Monday, killing more than 60 people. 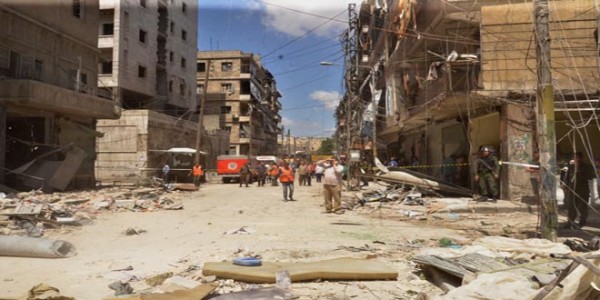 The head of the UN humanitarian task force, Jan Egeland, said on Thursday that there had been a “catastrophic deterioration in Aleppo over the last 24-48 hours, also in parts of the Homs area”.

In addition to the airstrikes, Egeland cited the hindrance of aid deliveries to besieged opposition areas. He noted the mortar attack on a convoy heading to the town of Rastan in northern Homs Province, and said another was forced to stop due to air raids.

The UN official also referred to the recent Russian-regime attacks on rescue and medical services, including the killing of more than 50 people in bombing of an Aleppo hospital on Wednesday night and five White Helmets rescuers in an attack on their center, west of Aleppo, on Monday:

The stakes are so incredibly high because so many civilian lives are at stake, so many humanitarian health workers and relief workers are being bombed, killed, maimed at the moment that the whole lifeline to millions of people is now also at stake.

Egeland was speaking after a weekly meeting of the International Syria Support Group, which brokered the February 27 cessation of hostilties.

“There has been progress. All of that may now be lost if the…fighting and the violence and bombardment of civilians, health workers, hospitals, relief workers continue,” he said.

More information is circulating about the deaths of the 47 rebels whose bodies were paraded by the Kurdish militia YPG on the streets of Afrin in northwest Syria on Thursday.

The Free Syrian Army and other groups launched an attack on Tal Rifaat, taken by the YPG in February. The operation failed because of the explosion of an ammunition truck.

The slain fighters were originally from Homs and had extensive experience fighting in northern Syria.

Russia’s State outlet RT, ignoring any deaths of civilians in opposition areas, has faked video for its claims that rebels are shelling regime districts and causing casualties:

The original footage was shot by prominent pro-opposition journalist Hadi al-Abdallah, who has covered frontline conflict and attacks on civilian areas for years.

The opening seconds of the footage clearly show a rescuer with the arm badge of the White Helmets, the civil defense organization that operates in opposition areas.

Abdallah filmed soon after a deadly Russian-regime attack on the Bustan al-Qasr district on Thursday.

RT removed the journalist’s references to the “regime” and “Assad”. Instead, it said that the images were of an assault on civilians by the jihadists of Jabhat al-Nusra — even though Nusra has no presence in Aleppo city.

A senior Turkish official said that Islamic State mortar shells were fired from Syria into southeastern Turkey on Thursday, damaging a howitzer belonging to the Turkish army but causing no casualties.

Governor Ali Yerlikaya said five shells were launched from Syria’s Jarablus area, striking near the Turkish town of Karkamis. One of them hit the howitzer while others landed on empty fields.

Yerlikaya said the Turkish military responded with artillery fire at ISIS positions across the border.

Islamic State shelling into Turkey this year has taken 18 lives, mostly in the border town of Kilis.

ISIS claimed in a video on Thursday (see Syria Daily) that it has destroyed three Turkish tanks with anti-tank guided missiles. There has been no confirmation of the assertion.