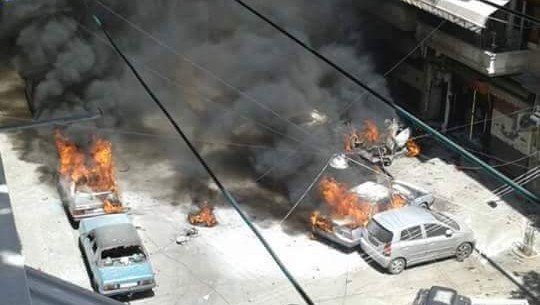 PHOTO: Claimed image of fires and smoke from shelling of regime-held west Aleppo on Monday

UPDATE 1400 GMT: Footage of another regime airstrike on an opposition-held area of Aleppo city on Tuesday:

ORIGINAL ENTRY: Amid the killing of more than 100 civilians in Aleppo by Russian and regime aircraft since last Thursday, Syria’s State media is claiming the deaths of 16 people from “Jabhat al-Nusra shelling” of regime-held areas of the city.

Jabhat al-Nusra has no presence in Aleppo city, which has been divided between the opposition and the regime since July 2012. However, rebel factions and pro-Assad forces have been in ongoing battles in the west of the city, in districts such as al-Rashideen.

Russian and regime bombing of opposition parts of the city eased yesterday with the Local Coordination documenting only seven deaths in Aleppo on Monday, most in the Jazmati district.

However, a Russian attack on Atareb, 20 km (12 miles) west of the city, killed five White Helmets civil defense volunteers. The White Helmets said their building was hit by five airstrikes and a missile — activists said the latter was a Russian-made Tochka short-range ballistic missile.

This same strike resulted in medium and light injuries among the rest of the team who were present.

The fourth airstrike destroyed the Centre’s buildings and dormitories, and the final strike targeted the garage for ambulances and fire trucks, which is located in the middle of the Centre, completely destroying all the Centre’s vehicles.

45 minutes after these airstrikes, a ballistic missile was fired carrying cluster bombs, from the regime’s Defense Labs south of Aleppo towards the Centre, falling outside the Centre.

Five members of @SyriaCivilDef were killed last night in regime/Russian airstrikes against the Atareb training center. They died #heroes

Killed yesterday in an airstrike. Our fallen comrades. pic.twitter.com/VIlKRZ20lA

The scene of the attack: 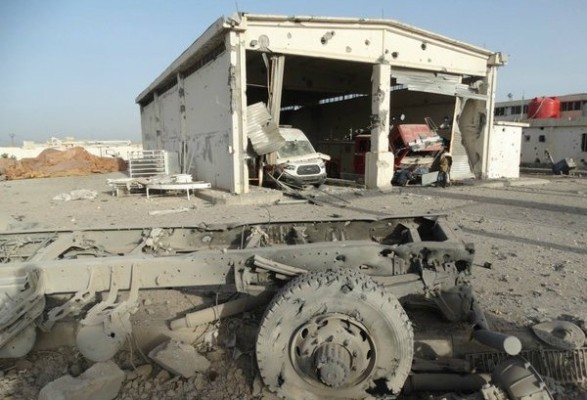 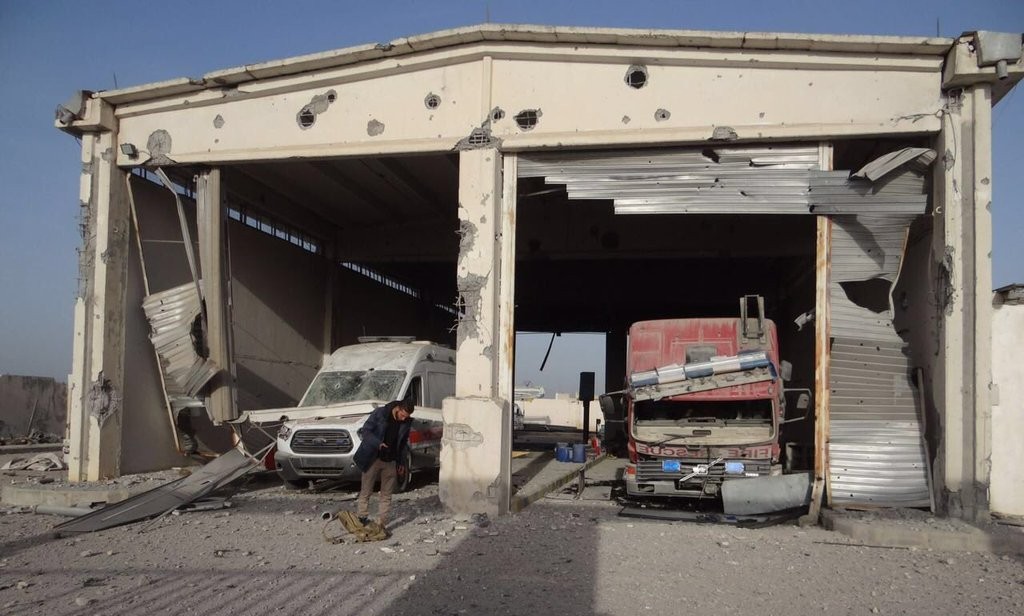 Footage of one of the Russian airstrikes:

The escalation of violence in and near Aleppo — as well as regime bombing and clashes in other areas of Syria — has effectively buried the February 27 cessation of hostilities, brokered by the US and Russia.

The head of the regime delegation, UN Ambassador Bashar al-Ja’afari, said after two meetings with de Mistura on Monday that the envoy was considering “amendments” which are “an integral part of this paper”.

President Assad and the delegation have already ruled out any discussion of Assad’s future or of a transitional governing authority, a central element of international proposals since 2012.

De Mistura has reportedly indicated the current round of talks will conclude on Wednesday.

Jafari claimed that Monday’s attacks on regime areas of Aleppo were linked to the opposition-rebel suspension of discussions and that they were ordered by Saudi and Turkish intelligence services.

The deputy commander of the Iranian Army has said that Tehran’s recent escalation of forces in Syria — including the first deployment of Army units alongside Revolutionary Guards — will continue.

General Abdolrahim Mousavi said on Monday, “Since the start of the conflict in Syria, the Islamic Republic of Iran’s Armed Forces voiced readiness for deployment and pressured their commanders to be dispatched to the region.”

Mousavi assured that the Supreme Leader had agreed with the troop escalation and emphasized, “This will continue as long as necesary.”

Iran has provided essential military support to the Assad regime throughout Syria’s five-year conflict. However, in autumn 2015, Tehran stepped up its involvement, in coordination with Russian airstrikes, in offensive against opposition-held territory.

Facing rebel pressure near Aleppo city, the Islamic Republic announced further deployments, including special forces, earlier this month. However, Iranian-led forces suffered defeats on the south Aleppo frontline as they tried to retake territory regained by the rebels and the jihadists of Jabhat al-Nusra.

The British Government has rejected a proposal by MPs to admit 3000 additional children — most from Syria — into the United Kingdom.

MPs voted against the initiative by 294 to 276 on Monday after the Home Office told members of the ruling Conservative Party that Britain is doing enough to help Syrian children who are displaced inside Syria and in camps in neighboring countries.

An amendment to the immigration bill would have allowed in 3,000 unaccompanied refugee minors who have made their way to mainland Europe.

The measure was introduced by Alf Dubs, a Labor member of the House of Lords who was a beneficiary of the Kindertransport, the government-backed program that accepted child refugees from Germany just before World War II.

President Obama confirmed on Monday that the US is sending another 250 troops to Syria, raising the total to 300.

US special forces and other troops have supported the Kurdish-led Syrian Democratic Forces in an advance against the Islamic State in northeastern Syria since last autumn.

But a “senior member of the Saudi royal family” dismissed the additional US troops as “window dressing” in Syria’s five-year conflict.

Obama said in Hanover, Germany, before a meeting with European leaders, “They’re not going to be leading the fight on the ground, but they will be essential in providing the training and assisting local forces as they continue to drive ISIL [the Islamic State] back.”

Claimed footage of an aid convoy struck by fire from pro-Assad forces as it travelled to Rastan in northern Homs Province on Monday:

A driver and three civilians were wounded in the attack.

Last week, a convoy of 65 trucks delivered the first assistance to Rastan, in an opposition-held pocket of towns and villages in northern Homs, since 2012.