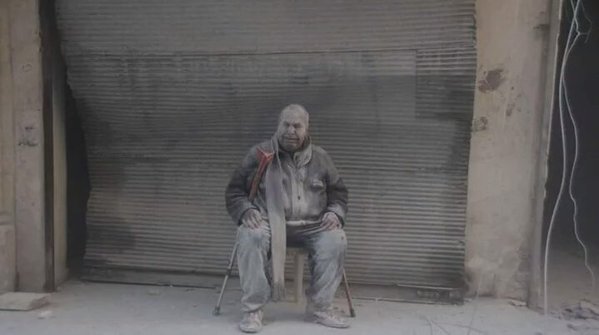 PHOTO: A dust-covered man sits after a Russian bombing of an opposition area of Aleppo, December 15, 2015

Aleppo has been a horrific place for some time now and few thought that it could get much worse. But things can always get worse — that’s the lesson currently being learned by those who have stayed behind in an effort to outlast this brutal conflict. People who have become used to dead bodies in the streets, hunger and living a life that can end at any moment.

“For the last two weeks, we’ve been living a nightmare that is worse than everything that has come before,” says Hamza, a young doctor in an Aleppo hospital. At the beginning, in 2011, he was treating light wounds, stemming from tear gas or beatings from police batons. When the regime began dropping barrel bombs in 2012, the injuries got worse. But now, with the beginning of the Russian airstrikes, the doctors are facing an emergency. Every two or three hours, warplanes attack the city, aiming at everything that hasn’t yet been destroyed, including apartment buildings, schools and clinics. Often, they use cluster bombs, which have been banned internationally.

They used to get around 10 serious injuries per day, but that number has now risen to 50, says Hamza, adding that most of their time is spent sorting body parts so they can turn them over to family members for burial. Russian missiles, he says, tear everyone apart who is within 35 meters of the impact.

“On one day, we had 22 dead civilians. The day before that, it was 20 injured children. A seven-year-old died and an eight-year-old lost his left leg.” The Russians attacked in the morning, he says, as the children were on their way to school. “We are going to need years of therapy in order to be able to cope with all this.”

There are seven doctors still working in the hospital. “Since the Russians began bombing the city, even more doctors have fled,” Hamza says. There are only about 30 medical professionals left in all of Aleppo, he adds. His hospital too is under fire and Hamza’s voice can be heard trembling over the phone. The regime, he says, has targeted the hospital five times in the past several years, but always missed. “The Russian bombardment, though, is very accurate.” One recent bomb, he says, just barely missed them.

“But here in the center of Aleppo,” the doctor says, “there aren’t any Free Syrian Army positions. Only civilians. They are bombing us to soften us up for the regime.” Assad’s troops, he explains, have already taken many surrounding towns and villages and he is afraid that Aleppo will soon be completely surrounded. One thing he is no longer hoping for is external assistance, saying the international community abandoned Syria long ago. “After all, the US supports the attacks,” he says.

Hamza is unsure how he will survive. He does not know. But leaving the city would mean one fewer doctor, which in turn would translate into more deaths. He says that more and more people are leaving Aleppo and that entire city quarters are emptying out. Those who are able are fleeing while they still can.

Once upon a time Aleppo was the largest city in Syria, an economic powerhouse with a city center listed as a UNESCO World Heritage site. But over the last three years, it has been divided between the regime and the rebels — the same rebels who joined together to drive Islamic State (IS) out of the city two years ago. Aleppo is the most important symbol of the resistance in the country, but now it is all but surrounded and cut off from the most important supply routes. There is no more diesel, hardly anything to eat and there are severe shortages of electricity and water. According to the United Nations, there are still some 300,000 people living in Aleppo — a population that may now have been abandoned to a rapid death from the sky or the slow death of starvation. It is a nightmare that could ultimately become worse even than Sarajevo was.

Back then, during the siege of Sarajevo in the 1990s, NATO intervened, the Dayton Accords soon followed and the peace has held until today. In Aleppo, there are no signs of peace coming any time soon. The Syrian civil war has been raging for five years now and 250,000 people, or even a half million, have died — the UN has stopped counting. It is a war in which more than 10 percent of the Syrian population has been killed or injured and 11 million have been displaced, either inside Syria or as refugees abroad. Yet there is still no Dayton in sight.

In Aleppo, the West is faced with the ruins of its policy of inaction, which it has sold as diplomacy. Western politicians, including the German foreign minister, have continually insisted that only a diplomatic solution can stop the violence in Syria. Even at the Munich Security Conference last week, US Secretary of State John Kerry was seeking to continue the Geneva talks, which had been suspended until Feb. 25 largely because Russia refused to reduce the number of airstrikes it is carrying out. Ultimately, a “cessation of hostilities” was agreed to in Munich, but it seems unlikely it will be worth much, particularly after the bombings of two hospitals on Monday, allegedly by the Russians, though Moscow has rejected the accusations.

Moscow’s approach to diplomatic efforts has clearly shown just how cynical this game has become. Russia has said that a real cease-fire can’t be reached before the end of February, making it clear that Russian President Vladimir Putin only intends to negotiate once he has reached his military goals. And German diplomats have said that Russia has refused to offer any guarantees that the Assad regime would adhere to a cease-fire.

Aleppo has made it clear that there could very well be a military solution for Syria: the victory of Assad achieved with the help of Russian bombs and Syrian and Iranian ground troops. It would be the victory of a regime that tortures and murders, a regime that drops barrel bombs on its own people and kills them with chemical weapons. It is a regime which stands accused by the UN of the “extermination” of its own population.

It would likely, though, be a victory without peace. Syrian President Bashar Assad’s calculation seems to be that once the rebels are destroyed, only the regime and Islamic State would be left — and no other alternatives. But the Sunnis, which have long been in the majority in Syria, aren’t likely to throw their support behind an Alawite-Shiite Assad regime. Syria would face years of Somalia-like failed state status.

The war has long since ceased being solely about Syria. The country has become Ground Zero of global geopolitics, an unholy mixture of Russia’s desired return to superpower status, an increasingly authoritarian Turkey, tentative US foreign policy, the Kurdish conflict, the arch-rivalry between Iran and Saudi Arabia, Islamist terror and the inability of a divided, crisis-ridden European Union to do much of anything.

The war in Syria has transformed from a civil war into a world war.

It has long since reached Europe in the form of millions of refugees, terror attacks in Paris and attacks on tourists in Tunisia and Istanbul. And America, which has long been the leader of the West and guarantor of security in Europe, has refused to get involved. Aleppo is therefore a test of Russia’s relationship with the West, a measuring stick for the value of democracy and a litmus test of the effectiveness of a morals-based foreign policy.

Already, Vladimir Putin looks to be one of the conflict’s winners. When it comes to the war in Syria, he is now in control. Without his bombers, military advisors and special forces, the weakened Syrian army wouldn’t be able to make any advances at all. Indeed, it was the looming defeat of Assad that pushed Putin to intervene at the end of September in the first place. At the time, Putin was still claiming that his goal was that of defeating IS — and many Western governments hoped naively that perhaps Russia could finally impose order in Syria.

Since then, though, it has become clear that the opposite is true: In four-and-a-half months, Putin has reversed the momentum in the Syrian civil war in favor of dictator Assad and has increased the chaos — all while largely ignoring Islamic State. What’s more, Moscow has targeted exactly those rebels that the West had hoped would fight IS. Putin has embarrassed the US superpower, discredited the UN and transformed Russia into an influential power in the Middle East.

In addition, his brutal operation has driven tens of thousands of people to take flight, thus intensifying the conflict between the EU and Turkey, dividing Europe even further and propelling the Continent’s right-wing populist parties to unprecedented heights. Those are all desired side-effects that conform to Moscow’s calculus: Everything that hurts Europe makes Russia stronger.

Berlin, too, has become convinced that Putin’s involvement in Syria is about more than merely providing support for his ally Assad — and about more than just the Middle East. For Putin, it’s about Europe, about ending the sanctions and about recognition of Russia’s zone of influence. “Putin is intentionally aggravating the refugee crisis in order to destabilize the EU. That is part of Russia’s hybrid war,” says German parliamentarian Niels Annen, foreign policy spokesman for the Social Democrats (SPD).

It has become increasingly clear that Russia is not a partner in the fight against Islamic State, as some in Europe had hoped. Rather, Russia is an adversary that is willing to achieve its goals by way of violence if necessary.

How, then, should Europe deal with the unpredictable ruler in the Kremlin? Should it talk to Putin or fight him? What are the consequences of American reticence for Europe? And how can this five-year tragedy be brought to an end? Is there still a solution at all beyond Bashar Assad?

The Foreign Ministry in Moscow is a combination of Russia’s historical pride and its new-found self-confidence. The tip of the Stalin-era structure still juts darkly into the winter sky, just as it always has, but the facade of the right-hand wing shines with a fresh gloss. Deputy Foreign Minister Gennady Gatilov, whose portfolio includes Syria, receives visitors on the fifth floor.

The Middle East, Gatilov says, will continue to be a focus of Russian foreign policy for years to come. He believes that Moscow has a particular responsibility for the region and that Russia is “geographically and historically closer” to Middle Eastern countries and that “we understand their mentality better than the West may do. At least we have never tried to force our will on the people there.” The comment was aimed at Washington. But in the Syrian drama, Moscow has another significant adversary: Turkey. The ambitions of Recep Tayyip Erdogan are dangerous and the West must finally recognize that fact, Gatilov says.

Would Moscow suspend its bombing campaign during cease-fire negotiations as a gesture of goodwill? Gatilov shakes his head: No, the airstrikes must continue, “even in the event of a cease-fire. The logic of a cease-fire includes all those who have a real interest in negotiations, but it does not include terrorists.”