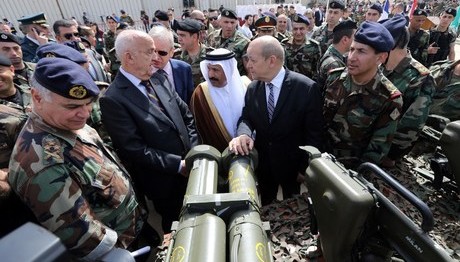 PHOTO: French, Lebanese, and Saudi Ministers at a delivery of Saudi-funded arms to Lebanon, April 2015

“The suspension came as a result of Lebanon’s positions, which are not in harmony with the brotherly ties linking the two countries,” said an unnamed Saudi official. “In light of these facts, the Kingdom has made a comprehensive review of its relations with the Republic of Lebanon, so as to preserve its own interests.”

The official gave the reason of a Lebanese failure to join the Arab League in condemning an attack on the Saudi Embassy in Iran in January, following Riyadh’s execution of a prominent Shia cleric.

However, the step may also be an attempt to curb the role of the Lebanese organization Hezbollah in Syria’s civil war, as the official cited Hezbollah’s “political and media campaigns” against Saudi Arabia and its “terrorist acts” in the Arab world.

Hezbollah has had a leading role in foreign-led offensives by the Assad regime, enabled by Russian bombing, that have pushed back rebels in northwest and southern Syria in the past two months.

Saudi Arabia had pledged $3 billion in late 2013 for the Lebanese army to buy weapons from France. The assistance would have been the largest aid grant to the military in Lebanese history.

Another $1 billion was committed in August 2014 to help the army and police force fight terrorism, days after the Islamic State and the jihadists of Jabhat al-Nusra briefly captured the town of Arsal near the Syrian border.

The withdrawal was unexpected. On Friday morning, Lebanese army commander Jean Kahwaji said that six A-29 Super Tucano light attack aircraft would “soon” be delivered as part of the Saudi grant.

Lebanese Prime Minister Tammam Salam appealed to Riyadh, “We express our deep appreciation for King Salman bin Abdulaziz and his brothers in the Saudi leadership…and we hope for a reconsideration of the decision to halt the aid for our army and security forces,” Mr Salam said.

However, the UAE said it supported Saudi Arabia’s decision because Lebanon had “repeatedly took negative, offensive and bizarre positions against pan-Arab consensus”.

Former Lebanese Prime Minister Saad Hariri, an ally of Saudi Arabia, said he understood Riyadh’s decision after the “pain” caused by Foreign Minister Gebran Bassil with the refusal to condemn the attack on the Saudi Embassy in Tehran.

Bassil said he opposed the Arab League statement because it referred to Hezbollah links with terrorist activities.