The Assad regime’s delegation at talks in Geneva on Syria drew a firm line against any significant discussions on Sunday, labeling the opposition-rebel bloc as “terrorists”.

The opposition-rebel High Negotiation Committee, which held its first discussion with UN envoy Staffan de Mistura on Sunday, has said that “proximity talks” with the regime can only follow a commitment to ceasefires, detainee releases from regime prisons, and access to humanitarian aid for besieged areas.

We don’t deal with terrorists. There are foreign powers endorsing foreign agendas, aiming at making political pressure on the Syrian government by using terrorism as a political weapon.

The Ambassador did say that he would discuss the ceasefires, detainee releases, and humanitarian corridors; however, these could only be part of the talks and could not be agreed before them.

The Assad regime’s ally Iran backed up Ja’afari’s line. Deputy Foreign Minister Hossein Amir Abdollahian told UN envoy de Mistura, “Precautions must be taken so that the terrorists do not enter the talks and take advantage of them under a new guise.”

The opposition-rebel bloc said later on Sunday that the initial discussions with de Mistura were “very positive” on “humanitarian issues”.

The HNC met for several hours to discuss the outcome, announcing that its lead negotiator — Mohammad Alloush of the rebel faction Jaish al-Islam — would arrive in Geneva on Monday.

HNC spokesman Salem al-Meslet told reporters, “We wish to see food reaching people who are starving to death, to the women and children. we want women released from regime prisons and the criminal bombardment from Russia to end.”

HNC member Basma Kodmani added, “We do not trust the regime but we are waiting for something to happen any minute.”

US Secretary of State John Kerry appeared to extend another hand to the opposition-rebel bloc, which debated for several days before agreeing to go to Geneva, by emphasizing the issue of aid in a video statement:

People are dying, children are suffering — not as a result of an accident of war, but as the consequence of an intentional tactic: “Surrender or Starve”. And that tactic is directly contrary to the law of war.

Let me be clear. The Syrian regime has a fundamental responsibility, all the parties to the conflict have a duty to facilitate humanitarian access to populations in need.

The HNC cited its pursuit of “actual and active representation for all components of the Syrian society” as “the cornerstone of the successful political transition in Syria”, and said “empowering and enhancing women’s presence in the political process and their participation in decision-making shall have positive results on the negotating process and the future of the Syrian State”.

Russian and regime air forces have continued intensive bombing of Darayya and Moadamiya, southwest of Damascus, as the Syrian military tries to advance on the ground:

Scores of attacks have been carried out on Sunday and Monday. Yesterday almost 100 people in Moadamiya were treated for suffocation because of gases from the bombardment.

A propaganda video from the jihadists of Jabhat al-Nusra challenges the Russian bombing campaign since September 30:

Rebels: We Are Outnumbered by Pro-Assad Foreign Militia North of Aleppo

Rebels are warning that they are outnumbered by pro-Assad foreign militia north and northwest of Aleppo city.

Pro-rebel activists says Iranian-led Iraqi militia are being airlifted with several flights per day from regime airbases and supported by intense Russian airstrikes.

The activists acknowledge that, despite heavy losses, the regime offensive has captured the villages of Duwayr al-Zeitoun and Tel Jibbin (see map). Pro-regime outlets are hailing an effort to relieve the long-maintained rebel siege of the enclaves of Nubl and al-Zahraa.

Rebel videos from near the frontline:

Saudi FM: We Will Step Up Military Aid to Rebels If Talks Fail

Saudi Foreign Minister Adel al-Jubeir has indicated that Riyadh will increase military assistance to Syria’s rebels if there is no advance in political talks in Geneva.

Speaking after a meeting with his Turkish counterpart Mevlut Çavuşoğlu on Sunday, Jubeir said the Saudi will “continue to support the opposition militarily if talks fail”.

Çavuşoğlu said, “We asked the opposition that they can put their conditions to start the negotiations and continue the negotiations. They can leave anytime if they are not implemented.”

The number of Syrian refugees stranded near Jordan’s border has risen to 20,000 as they wait for permission to enter, according to the head of the UN refugee agency in Amman.

Andrew Harper said 4,000 to 5,000 people are arriving in the remote desert area every month.

In recent months, Jordan has permitted only several dozen refugees to enter each day. Authorities have cited security concerns, saying many Syrians come from areas controlled by the Islamic State and need to undergo strict vetting.

International aid officials say the UN-run Azraq refugee camp is still more than half empty and could house thousands of newcomers.

More than 600,000 Syrians are registered refugees in Jordan, but Jordanian official Qasem al-Zoubi said on Sunday 1.265 million Syrians live in the kingdom, which has a population of 9.5 million.

The pro-opposition Orient News reports on the closure of the main hospital in Anadan in Aleppo Province, following Russian bombing:

Since it began attacks on September 30, Russia’s air force has damaged hospitals and field clinics throughout northwest Syria.

Aftermath of Sunday’s double bombing in southern Damascus on Sunday that killed 60 people: 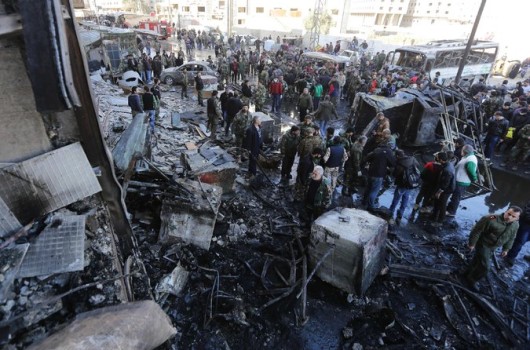 The car bomb, followed by a suicide bomber who detonated his explosive belt, was near the Sayyida Zeinab shrine, a revered site for Shia Muslims. The Islamic State reportedly claimed responsibility.

Meanwhile, regime warplanes and helicopters dropped scores of barrel bombs on the besieged Damascus suburb of Moadamiyah. Activists said 97 people were treated for suffocation, with doctors saying they had not seen so many cases since the regime’s chemical attacks near Damascus that killed more than 1,400 people in August 2013.