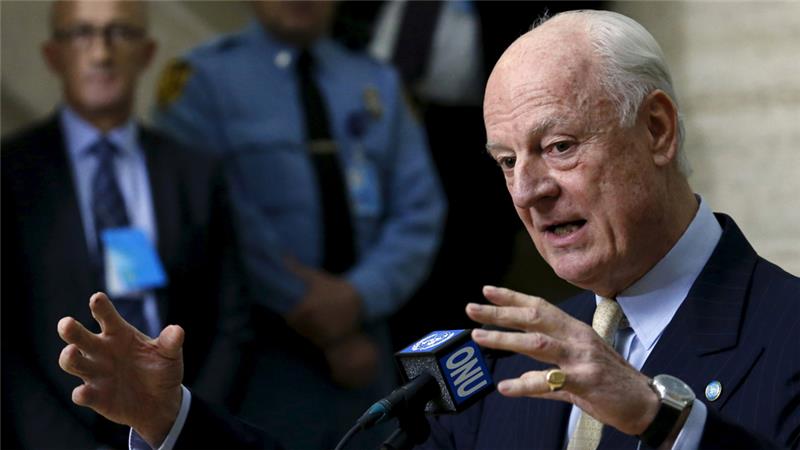 UN envoy Staffan de Mistura met both sides in Syria’s Geneva talks on Monday, declaring, “The duration of the negotiations depends on the willingness and the determination of both sides.”

Little of substance came of de Mistura’s first contacts in the same day with both the Assad regime’s delegation and the opposition-rebel bloc.

The head of the Assad group, Syria’s UN Ambassador Bashar al-Ja’afari, has already said that there will be no concessions and has framed the opposition-rebel team as “terrorists”. The opposition’s High Negotiations Committee has rejected any “proximity talks” before conditions are addressed such as ceasefires, detainee releases from regime prisons, and access to humanitarian aid for besieged areas.

De Mistura said he could not comment on how long he expected the first round of talks to last, but hoped negotiations “achieve something” by February 11, the next scheduled meeting of the UN and about 20 countries of the International Syria Support Group.

Saying that he expected the talks to be “complicated and difficult”, the envoy asserted, “The first immediate objective is to make sure the talks continue and that everyone is on board.”

The UN did say that the Assad regime had agreed “in principle” to allow aid be delivered to the besieged opposition-held town of Madaya, where up to 75 people have died of starvation from the Syrian military’s siege. At the same time, rebels would permit assistance to reach the regime enclaves of al-Fu’ah and Kafraya in northwest Syria.

Salem al-Meslet, the spokeman of the High Negotiations Committee said: “We came here to discuss with the special envoy [about] UN Resolution 2254 — lifting the sieges and stopping the crimes done by Russian air strikes in Syria — and I believe we received positive messages.”

A senior member of the leading rebel faction Ahrar al-Sham has repeated the call for the jihadists of Jabhat al-Nusra to break from Al Qa’eda.

Abu Issa, Ahrar’s Vice-Commander for Political Affairs, said Nusra should renounce allegiance to Al Qa’eda to show it “cared about the interests of the Syrian revolution”.

Two weeks ago, rebel groups met the leader of Jabhat al-Nusra, Abu Mohammad al-Joulani, to discuss unification in the face of regime-Russian-Iranian-Hezbollah offensives. The two sides agreed on a Syria under Sharia law; however, Ahrar refused unity without Nusra’s break from Al Qa’eda.

Abu Issa said, “Any merger including Al-Qaeda is just a damage to the Revolution. It harms the Syrian people.”

Senior US envoy Brett McGurk has described his two-day visit inside Syria, which included meetings with Kurdish officials and fighters.

The trip by McGurk, President Obama’s envoy to the US-led coalition against the Islamic State, was the first known entry by a senior US official into Syria since the coalition began airstrikes in September 2014.

McGurk toured Kobane, the town on the Turkish borders where Kurds repelled a four-month ISIS in January 2015, and talked to representatives of the Kurdish-led Syrian Democratic Forces.

Created in October 2015, the SDF has become the main ground force supported by the US, which has provided weapons, ammunitions, and special forces. Its primary military units are from the YPG militia, the military branch of the Kurdish Democratic Union Party (PYD).

Turkey has accused the PYD of being a front for the Turkish Kurdish insurgency PKK, which has pursued an armed struggle for more than 30 years. The US officially labels the PKK as a “terrorist organization”.

McGurk avoided any statement about the political complexity of support for the SDF — and the US turn away from backing of Syrian rebels fighting the Assad regime, simply saying that he met “battle-tested and multi-ethnic anti-ISIL [Islamic State] fighters” who are “hectically” engaged in battle.

He focused instead on an emotive tribute to the Kurdish resistance against the Islamic State:

It was quite moving and poignant to see these sites with our own eyes and to talk to the people who were in the fight….

It was important to see this with our own eyes and talk to people on the ground. It’s obviously something all of us will both remember and also reflect upon as we realize how long we have to go to defeat and destroy this barbaric terrorist organization.

He said of talks in Geneva — which do not include representatives of the PYD — “This is just the beginning of a process, and we emphasize the need for inclusivity, particularly as this process unfolds.”