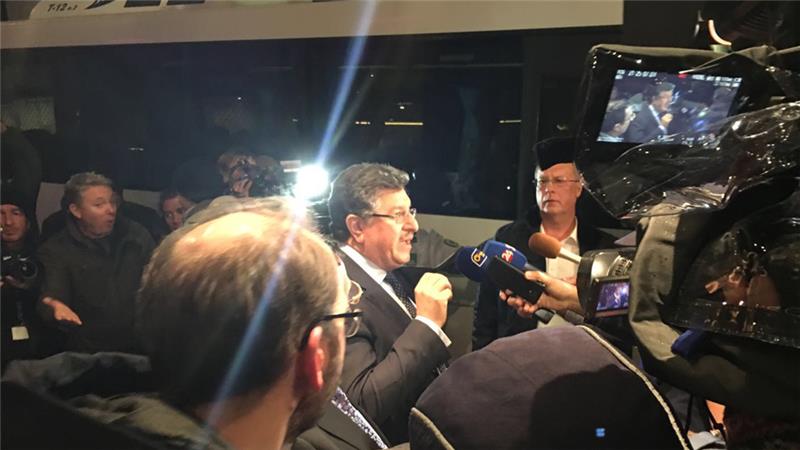 Syria’s opposition-rebel bloc has finally arrived in Geneva for talks about a political resolution to the five-year crisis; however, it has threatened to leave if the “crimes” of the Assad regime are not addressed.

The 17-member negotiating team and other bloc officials reached Geneva late Saturday after a delay of several hours over visa issues.

The bloc had held out from attending the talks, which began on Friday, because preconditions — ceasefires, detainee releases from regime prisons, and access to aid for besieged areas — were not being addressed. It changed its position when the UN agreed that discussions would focus on ceasefires and aid, rather than an attempt at “proximity talks” between the opposition and the Assad regime’s group, led by Syria’s Ambassador to the UN, Bashar al-Ja’afari.

We want the peace talks to work, but there is no seriousness on the part of the regime….

Meslet said that the HNC would meet UN envoy Staffan de Mistura on Sunday to consider its preconditions.

On Saturday, a “concept paper” from de Mistura for UN monitoring of ceasefires circulated. The paper indicated that the mission would be restricted to areas with “appropriate local, national, and international security guarantees”. It would not monitor human rights issues, investigations of war crimes, or release of detainees.

Opposition activists report that 97 people in the besieged Damascus suburb of Moadamiyeh are being treated for breathing difficulties after regime warplanes and helicopter gunships dropped barrel bombs and missiles.

Moadamiyeh has been besieged by the Syrian military since late 2012, with scores dying of malnutrition, and supplies are still cut off despite a ceasefire in January 2014. The suburb, southwest of Damascus, was also one of the areas struck by the Assad regime’s chemical weapons attacks of August 21, 2013, which killed more than 1,400 people.

Video: Kerry Appeals to “Both Sides to “Make Most” of Talks

US Secretary of State John Kerry has issued a video statement, “I appeal to both sides to make the most of this moment, to seize the opportunity for serious negotiations in good faith”:

Kerry addressed the opposition-rebel bloc’s demand for an end to sieges, noting that the Assad regime approved only 13 of 113 UN requests last year for delivery of humanitarian aid:

People are dying, children are suffering — not as a result of an accident of war, but as the consequence of an intentional tactic: “Surrender or Starve”. And that tactic is directly contrary to the law of war.

Let me be clear. The Syrian regime has a fundamental responsibility, all the parties to the conflict have a duty to facilitate humanitarian access to populations in need.

The Secretary of State also cited the obligation under last month’s UN resolution for a cessation of bombing.

State media is reporting that 45 people have been killed and 110 injured in a double bombing near the Sayyida Zeinab shrine in southern Damascus.

A car bomb was followed by a suicide bomber’s detonation of an explosive belt.

Explosion in Sayeda Zainab today (most likely by the regime) in order to dominate Geneva talks… pic.twitter.com/vMiKbKAsjn 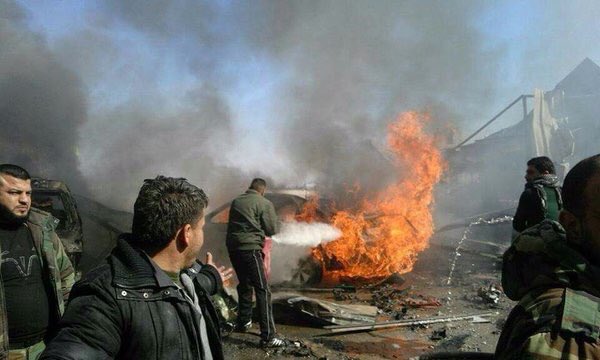 The shrine, with the grave of a granddaughter of the Prophet Mohammed, is revered as a pilgrimage site by Shia Muslims.

The Kurdish militia YPG has warned that it will respond to attacks by the Turkish Army in northern Syria.

The YPG said on Saturday that Turkish units had crossed the border near the village of Sermisax, 13 km (8 miles) west of the Turkish town of Derik. It claimed that the Turkish Army fired on civilian protesters, although there were no casualties.

We will no longer remain silent in face of growing aggression of the Turkish Army who are desired to cause provocations. We intend to be fully clear in warning the Turkish leadership and their military that if they continue violating our borders, we shall defend our land and people.

Ankara considers the PYD as a front for the Turkish Kurdish insurgency PKK. It has warned the YPG not to move west of the Euphrates Rivers, a prospect heightened by recent Kurdish advances against the Islamic State in northern Syria.

Russia’s Defense Ministry has denied claims by Turkey that another of its warplanes entered Turkish airspace.

“There have been no violations of Turkey’s airspace by aircraft of the Russian air group in the Syrian Arab Republic,” the Ministry said.

Turkish officials said earlier on Saturday that an Su-34 fighter had crossed its territory in a “concrete indication of Russian acts aiming to escalate problems”.

Turkey President Recep Tayyip Erdoğan warned Moscow would “face consequences if it continues such violations”. He cited concerns about civilians and said, “It is evident that Russia’s operations in the region have no relevance with counter-terror efforts, and is solely designed to keep the Assad Regime in power.”

The warning follows attacks by Russian warplanes and regime rockets and artillery on displaced persons camps, including members of Syria’s Turkmen minority, in Latakia Province near the Turkish border.

On November 24, Turkish jets shot down a Russian SU-24 fighter, claiming that it had entered Turkey’s airspace en route to bombing Latakia Province in northwest Syria. The pilot was killed and a navigator was rescued by Syrian regime troops.