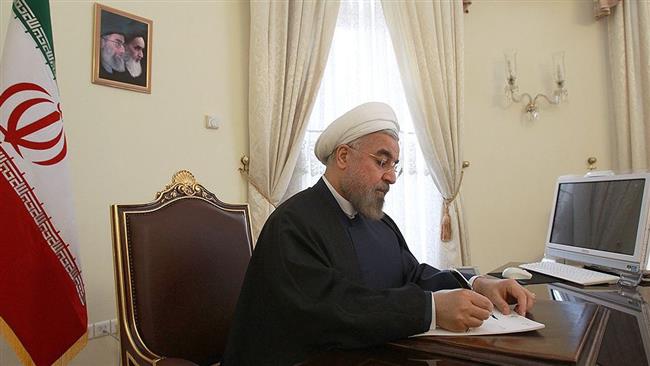 Tension flared over Iran’s ballistic missiles on Thursday, with critics of the July 14 nuclear deal between Tehran and the 5+1 Powers trying to take advantage.

After the White House proposed new sanctions because of the missile program, President Rouhani ordered the Defense Ministry to build more of them:

[The US seeks to] illegally interfere in the Islamic Republic of Iran’s programs for boosting the defense power.

In line with the [country’s] ratified defense policies, it is necessary that the program for the production of various types of missiles needed for (Iranian) Armed Forces continue with more speed and seriousness.

Rouhani’s statement raised the expectation of US anti-deal forces that the sanctions would be quickly implemented. However, on Thursday night the Obama Administration stepped back and declined to give a timetable for their imposition.

Iran has never accepted the ban. This autumn it announced new testing of the Emad medium-range ballistic missile. US opponents of the nuclear deal, frustrated in their challenges to the specific measures, declared that the tests were cause to suspend implementation and thus maintain American and European sanctions on Tehran.

The Rouhani Government is hoping that the International Atomic Energy Agency will verify Iranian compliance later this month, beginning the process of sanctions removal. Earlier this week, the IAEA signaled progress towards that goal with the closing of the file on Iran’s past nuclear activities. Last week Tehran confirmed another important step with the transfer of almost all of its enriched uranium to Russia.

Rouhani’s announcement on Thursday came amid in-fighting with opponents who say that the Government has been too weak in its dealings with the Americans. The dispute is part of political battles ahead of February’s elections for Parliament and the Assembly of Experts, the body which chooses the Supreme Leader.

Last week Iran’s Parliament issued its own challenge to the US, approving urgent consideration of a bill demanding compensation from Washington for a 1953 coup that overthrew Prime Minister Mohammad Mossadegh.

The Iranians have also been angered by a US law, signed by President Obama on December 18, that restricts visa-free travel for anyone who has visited Iran, Iraq, Syria, or Sudan within the past five years.

On Twitter, Foreign Minister Javad Zarif sent out a message of optimism:

Much was achieved in 2015 through diplomacy—let’s learn from history and repeat successes, not past mistakes. A Happy New Year to all.

However, the Foreign Ministry’s tone was far different over the sanctions and missile issue, as spokesman Hossein Jaberi Ansari said:

The Supreme Leader’s top aide, Ali Akbar Velayati, has reinforced the Iranian line that the US created the Islamic State by citing Presidential candidate and former Secretary of State Hillary Clinton.

In an interview in English with Press TV, Velayati said:

Recently the former Foreign Minister of the United States, Ms Clinton, in her book said that they [the US] have created Daesh [the Islamic State] in the region for making the artificial Islamophobia.

So they [the Islamic State] are the agents of the Western countries and the Zionists.

Amid Russian bombing and an escalation in Iranian ground forces in Syria this autumn, Velayati has said several times that the retention of Assad and the regime is a “red line” for Tehran.

The security of [the] region is the security of Iran. If Iraq or Syria or any other neighboring country is in danger…, we should not remain indifferent. So…on the base of the request of the legal governments of Baghdad and Damascus, we have tried to help these two governments to fight against terrorism.

The aide backed Russia’s latest attempt to exclude certain rebel groups, such as the Jaish al-Islam and Ahrar al-Sham factions, from discussions. He said there could be no “negotiations with terror groups”.

After meeting Deputy Foreign Minister Hossein Amir Abdollahian, Hassoun said, “The Islamic Republic of Iran’s defense from Syria is not defending a specific person, but it is defending Islam and the Muslims against the enemies of Muslim world and also defending the axis of resistance against the Zionist regime.”