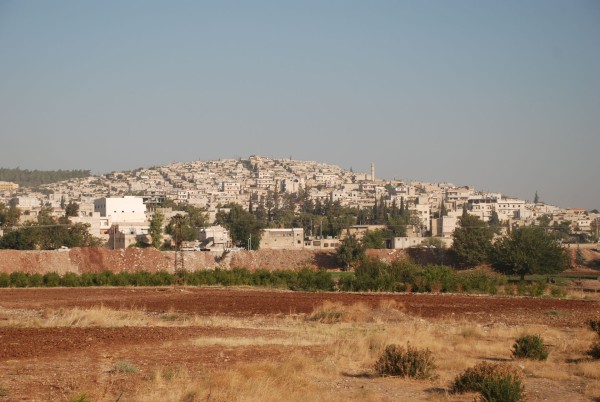 Clashes had broken out two weeks ago when a dissident faction, the Jaish al-Thuwar group led by former US favorite Jamal Maarouf, seized villages near the Turkish border. Rebels counter-attacked and the Kurdish militia YPG, which reportedly had established links with Jaish al-Thuwar, joined some of the fighting.

The situation was further complicated by Kurdish claims that their Afrin canton in northwest Syria was being attacked by rebels. Pro-rebel outlets countered that Kurdish militia were threatening a key supply road into opposition-held Aleppo city and that clashes were occurring between Afrin and the opposition areas of Atmeh and Azaz.

Copies of the truce agreement circulated on social media on Thursday night: 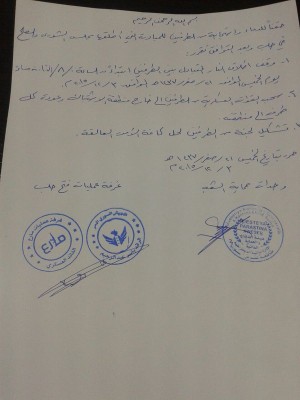 However, Jaish al-Thuwar soon responded that it would not recognize the agreement and will continue to fight the rebels for four villages that the faction briefly held.

Jaish al-Thuwar has developed from the Syrian Revolutionary Front, which was heralded by Washington in early 2014 as a “moderate” group that could lead the challenge to the Assad regime. However, the SRF and its leader Maarouf were accused by other rebel groups of theft and war profiteering, and it was expelled from northwest Syria by the Islamist faction Jabhat al-Nusra in December 2014.

Meanwhile, rebels and the Islamic State are also battling in villages near Azaz — this footage is from the fight for Jarez:

The BBC speaks with some of the estimated 5,000 members of the Turkmen minority fleeing their homes amid Russian airstrikes in northwest Syria near the Turkish border.

The residents have fled into Turkey’s Hatay Province.

A 25-year-old mother said of life amid the bombing, “We couldn’t even fire up our ovens. At night we had to make sure all the lights were switched off because as soon as they see a light they bomb it.”

After the village mosque took a direct hit, the family — the woman, her parents, sisters, and eight-month-old daughter left to stay with relatives in a village close to the border.

Russia stepped up attacks on northern Latakia Province last month in support of a Syrian military ground offensive. Turkey, having warned Moscow about the effect on the Turkmen community, shot down a Russian warplane on November 24 after Ankara said that the Su-24 jet fighter crossed into Turkish airspace.

US Secretary of State John Kerry said on Friday that the Syrian military and rebels could cooperate in efforts against the Islamic State, but only if there was confidence that President Assad would eventually leave power.

Speaking during a visit to Greece, Kerry said it would be “exceedingly difficult” to obtain the cooperation without the assurance of his departure:

With respect to the question of Assad and the timing, I think the answer is…it is not clear that he would have to ‘go’ if there was clarity with respect to what his future might or might not be.

But it would be exceedingly difficult to cooperate without some indication or confidence on the part of those who have been fighting him that in fact there is a resolution or a solution in sight.

A US official said Kerry’s message was a restatement of the American position that Assad “doesn’t have to go right now”, provided there was a clear political transition in prospect.

Since October 7, Iran has officially lost 73 troops — eight of them commanders, including the overall commander of forces in Syria — as it has accompanied and led the Assad regime’s offensive against rebels and the Islamic State.

AFP reports on the Red Cross’s assessment of a “catastrophic” humanitarian situation as winter approaches for Syrians who are refugees or displaced inside the country:

Kerry Presses His Plan to Solve Crisis in “Months”

US Secretary of State John Kerry, pressing his argument that he can establish a political resolution in Syria by the end of March, said on Thursday that the Islamic State can be defeated within “months” of a ceasefire between the Assad regime and rebels.

Kerry said an aerial campaign against ISIS, joined by Britain on Thursday, will also require local ground forces rather than Western troops.

The Secretary of State met Russian Foreign Minister Sergey Lavrov during a European conference in Belgrade on Thursday, just before Lavrov saw Turkish Foreign Minister Mevlut Cavusoglu, the first high-level Russian-Turkish meeting since a Russian warplane was downed by Turkish jets on November 24 near the Syrian-Turkish border.

Lavrov said he “didn’t hear anything new” in the discussion with Cavusoglu: “The Turkish Foreign Minister reaffirmed the approaches announced by the Turkish President and Prime Minister. We reaffirmed our assessment.”

After Russia’s efforts convened two rounds of international talks in Vienna in October-November, Kerry has tried to seize the initiative, with the Americans telling allies of the plans for ceasefires, UN monitoring inside Syria, and regime-opposition talks for the political transition.

Lavrov did not focus on Kerry’s grand plan on Thursday. Instead, he said that the Secretary of State “agreed with me that closing of the Turkish-Syrian border and the Turkish-Iraqi border…is among the most urgent measures”.

Russia is trying to cut off any cross-border support for rebels, bombing crossing and infrastructure in the area of northwest Syria close to Turkey.