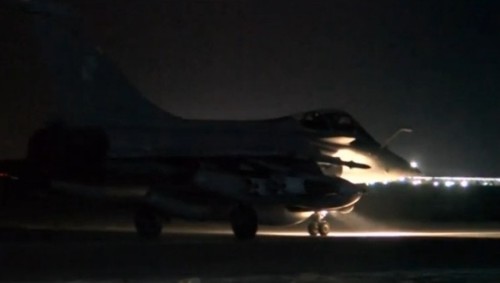 PHOTO: A French fighter jet taking off on Sunday night for an attack on Raqqa in northern Syria

Analysis: Why the Vienna Conference is a “Gift to the Assad Regime”
Iran Daily, Nov 16: Tehran Blocks Exclusion of Syria’s Assad from Elections

In its first notable intervention in Syria’s conflict, France bombed the Islamic State’s center of Raqqa in the north of the country on Sunday.

The anti-Islamic State activist group Raqqa is Being Silently Slaughtered reported the strikes, hours before French officials issued their confirmation.

“The first target destroyed was used by Daesh [the Islamic State] as a command post, jihadist recruitment centre and arms and munitions depot. The second held a terrorist training camp,” the French Defense Ministry said in a statement.

Raqqa is Being Silently Slaughtered said a stadium, museum, clinics, a hospital, a chicken farm and local governmental building were hit among at least 30 airstrikes. It said water and electricity were cut, but reported no civilian casualties.

Khaled al-Homsi, an opposition activist whose uncle was a famous archaeologist beheaded by Islamic State fighters, issued a plea on Twitter:

To the people & government in #France, #Raqqa City residents are not all #ISIS , we please do not targets at random pic.twitter.com/7pWUK9hD4D

French jets taking off on their missions:

In a further sign of the French escalation, the aircraft carrier Charles de Gaulle is set to leave the port of Toulon in the next two days, with 18 Rafale and 8 to 9 Super Etendard strike fighters aboard.

The Islamic State has controlled Raqqa, Syria’s 7th-largest city, since autumn 2013. The US Government has said that it wants to support an offensive of Kurdish and Arab forces to reclaim Raqqa, but the leading Kurdish party and military have indicated that the offensive is not a priority.

The Syrian air force and, since September 30, Russian warplanes have carried out occasional attacks on Raqqa, but their priority has been the bombardment of rebels opposing President Assad.

Iran has lost 55 commanders and fighters since it joined the Syrian military’s offensives on October 7, according to the latest compilation of death notices from the Iranian media.

#Iran fatalities in "Ope. Muharram" rises to 50 as diplomats try to design a peace process for #Syria. #SyriaTalks pic.twitter.com/Sdfilo82XN

Four deaths were announced on Saturday and another on Sunday.

At least seven Iranian commanders — including the overall commander in Syria, General Hossein Hamedani — have been killed.

US officials say American warplanes have hit 116 Islamic State trucks, trying to disrupt movement of oil produced by the militants.

The officials said the trucks were destroyed in an attack by four A-10 attack planes and two AC-130 gunships near Deir ez-Zor, in eastern Syria close to the Iraqi border.

Until Monday, the US refrained from striking the Islamic State’s fleet of more than 1,000 tanker trucks because of concerns about civilian casualties, according to the officials. Before today’s attack, two F-15 warplanes dropped leaflets about an hour beforehand, warning drivers to abandon their vehicles, and strafing runs reinforced the message.

The opposition Local Coordination Committees have issued a statement condemning Friday’s attacks by the Islamic State in Paris:

We have been warning, since the beginning of the revolution for freedom, dignity, and democracy, that the Assad regime would export violence in an attempt to distract attention from his crimes inside Syria. Today, while we are overwhelmed with sorrow and the daily victims, as well as the destruction we witness, we offer our condolences to the families and loved ones of the victims of the terrorist attacks in Paris, and share their pain. We continue to work through peaceful methods to overcome dictatorship in all its forms….

No act of terror, no matter how extreme, will derail our objectives to achieve freedom, democracy, and dignity for all.

May hope and humanity replace fear and prejudice. May all victims of terrorism rest in peace. And let us endeavor, together, to achieve justice.

Obama and Putin Discuss Syria on Sidelines of G20 Summit

US President Barack Obama and Russian counterpart Vladimir Putin in a 30-minute discussion on Sunday on the sidelines of the G20 summit in Turkey: 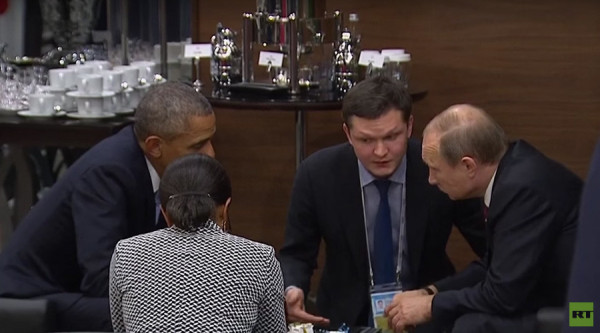 Putin’s aide Yury Ushakov said the leaders had an extensive discussion “first on Syria and then Ukraine”. He explained, “Strategic objectives relating to the fight against the Islamic State are, in principle, very similar, but there are differences on the tactics side.”

A White House official said that “President Obama and President Putin agreed on the need for a Syrian-led and Syrian-owned political transition, which would be proceeded by UN-mediated negotiations between the Syrian opposition and regime as well a ceasefire”.

Russia is hailing a meeting between its leader in Chechnya, Ramzan Kadyrov, and a Syrian “internal opposition”.

I reminded [them[ that terrorists from 51 countries were fighting against Russia in Chechnya. Not a single country helped Russia in that struggle. To achieve peace in Syria, people of that country should get united and rebuff their enemies. It is a big mistake to hope that this conflict can be settled in Western capitals. America and Western states are doing their utmost to keep the conflict running forever.

He said the Syrian delegates were glad to come to Chechnya “to see with their own eyes how the task of rebuffing international terrorism and restoration of the republic was solved”.

Outspoken and blunt, Kadyrov has been linked to a series of abuses and murders since Moscow put him in charge of Chechnya in 2007.

Kadyrov stands above Russian law. Any attempt to remove him from his job, or to prosecute him, could provoke a new Chechen war.

[Russian President Vladimir] Putin is undoubtedly scared of such a development, which is why he can’t solve the Kadyrov problem.

Regime “Self-Defense Divisions” Formed, Including Teens and Men over 70

The Assad regime is bolstering its security forces with Self-Defense Divisions, volunteer units in Outer Damascus.

Hundreds of members graduated on Friday in the first ceremony.

The new members ran a mock checkpoint, demonstrated weapons skills, and fought off simulated attacks in Friday’s graduation, marching under regime and Baath Party flags before a delegation of military and political leaders.

“We are here, more than one thousand fighters, all of us farmers, laborers and employees to support the army,” the graduate told Syria Direct. “If we aren’t the army’s backup, who will be?”

He said, “Among us are people in their seventies, and others who are not yet of age for compulsory military service [18 years old].”

The regime has reportedly been pressed into forced conscription of men, including house raids and detentions at checkpoints, as Syrian forces have been depleted and overstretched.