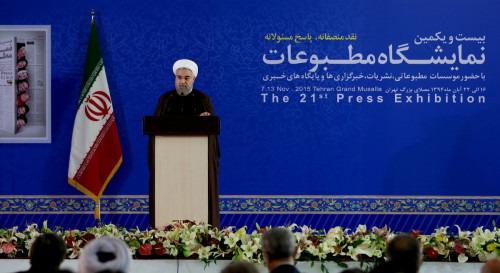 President Rouhani renewed his battle against Iran’s hardliners on Sunday, accusing their media outlets of persecuting people and supporting crackdowns by the security services.

Rouhani told an audience at a Tehran press fair that the media benefits from “a permanent security margin…so that not only can they say whatever they want, but they also sometimes act like the secret police”.

“You learn from some publications who will be arrested tomorrow, what is going to be closed down tomorrow, which individual’s reputation should be damaged,” the President said.

Rouhani’s speech was the latest volley in a growing fight within the regime ahead of February elections for Parliament and the Assembly of Experts. The President’s opponents — fearing a bloc including supporters of Rouhani, former President Hashemi Rafsanjani, and reformists — have used the Supreme Leader’s warnings of US “infiltration” to claim that a “fourth seditions” is being abetted by Government officials.

The campaign includes leaders of the Revolutionary Guards, whose commander Mohammad Ali Jafari said last week, “In this atmosphere, some officials who trust liberalism and the West may neglect the warnings about the threat.”

After the Supreme Leader highlighted the US “den of espionage” in a speech last Tuesday, Rouhani countered the next day with criticism of the recent arrests of at least five journalists and two businessman, the Iranian-American Siamak Namazi and Lebanese-American Nazar Zaka:

Let us not go and arrest one person here, another there, based on an excuse and without any reason, and then make up a case and aggrandize it, and finally say this is an infiltration movement.

See Iran Feature: Supreme Leader — US is a “Den of Espionage” Conspiring Against Us
Iran Daily, Nov 5: Rouhani Fights Back, Criticizing Arrests of Journalists and Businessmen

While the regime in-fighting has surged since the July 14 nuclear deal, the tension goes back to the start of the Rouhani administration in 2013. Hardliners have challenged the Government’s attempts to open up the political and cultural spheres. The President has countered with denunciations of those trying to “take people to heaven through force and a whip”.

The President also said on Sunday that any suspension or ban of news media must be a last resort, as he called for a transparent press system with specific rules and regulations.

In the latest PR step in its imprisonment of journalists, businessmen, and activists, the Revolutionary Guards have put out a high-profile statement about the detained Lebanese-American businessman Nazar Zaka.

“Informed sources” inside the Guards’ Intelligence Unit told Iranian media that Zaka organized “networks of infiltrators…to polarize the political environment”. They claimed that he “trained in a US base in Riverside County, California” for his mission.

Calling Zaka a “hidden treasure trove” of the Americans, the Guards said he had provoked the mass demonstrations of the 2005 Cedar Revolution in Lebanon and put out the US line that officials of Syria’s Assad regime were involved in the assassination of Lebanese Prime Minister Rafik Hariri in February 2005.