Syria Daily, Oct 17: The 5-Front Regime-Russian-Iranian-Hezbollah Offensive Against the Rebels 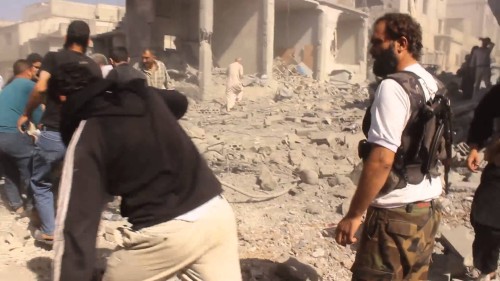 PHOTO: Aftermath of a Russian airstrike in northern Homs Province on Friday

The Assad regime and Russia opened a fifth front on Friday in their 11-day offensive against Syria’s rebels, with Iranian-supported forces and Hezbollah joining the campaign.

Covered by Russian airstrikes, Assad forces, Hezbollah, and the Iran-backed units launched attacks south of Aleppo, hoping to recapture the ‘Azzan Mountains and to establish a larger buffer-zone around the regime’s only highway leading to Syria’s largest city.

On October 7, following a week of Russian bombs, rockets, and cluster munitions, the Syrian military moved on a 20-km (13-mile) salient in northern Hama Province and the frontline in neighboring Latakia Province. Soon they also tried to advance between the two areas in the al-Ghab Plain, captured by rebels as they took control of Idlib Province to the north in the spring.

The Russian military said on Friday that it had carried out more than 600 aerial missions on 380 Islamic State positions. It did not acknowledge any attacks on rebel territory or civilians.

Aftermath of an airstrike on Ter Maaleh in northern Homs Province on Friday:

The extent of Iran’s involvement in the offensive is still unclear. Photographs of Iranian commanders in Syria — notably General Qassem Soleimani, the head of the elite Qods Forces — and the deaths of three of them in the past week point to Tehran’s escalating role in the ground assaults.

Some reports say “hundreds” of Iranian soldiers have joined, whether in an “advisory” capacity or as battlefield troops. Iran’s Foreign Ministry harshly denied the claims on Friday, saying they were Western propaganda to divert attention from the support of “takfiri terrorists” by the US and its allies.

Other reports assert that about 1,500 Iran-supported militia, including from Iraq and Pakistan, are involved in the Aleppo campaign.