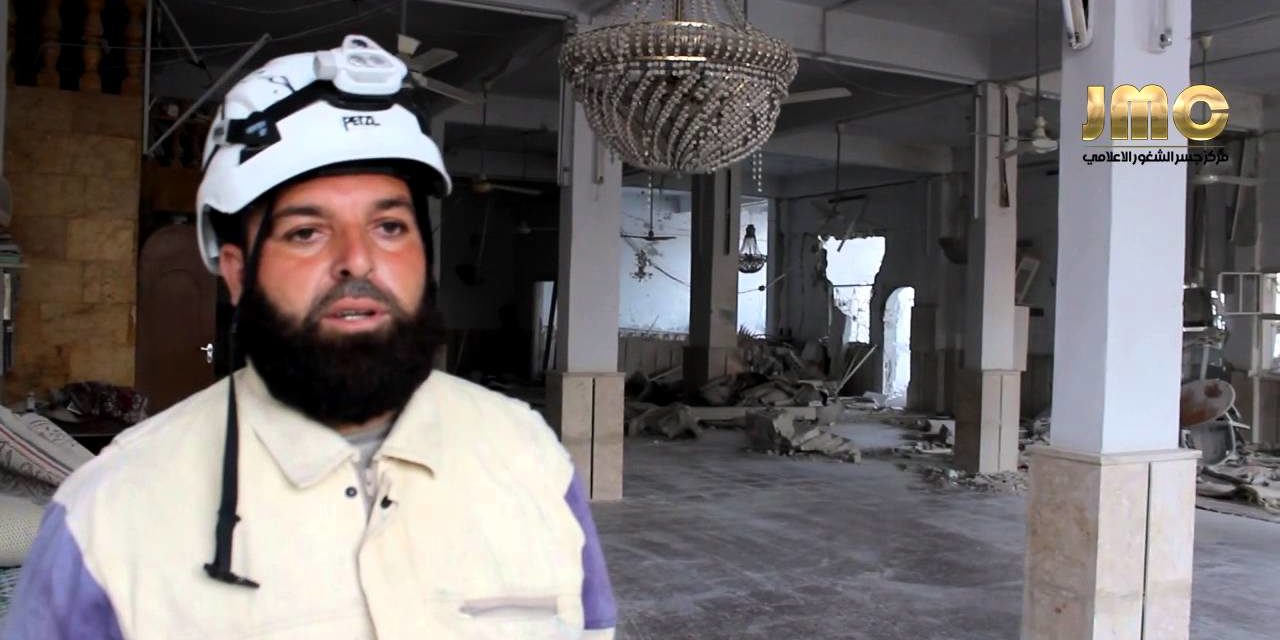 PHOTO: The remains of a mosque in Jisr al-Shughour in northwest Syria, destroyed by Russian bombing

A map of Russia’s claimed airstrikes through early Thursday evening — almost all of the attacks are on rebel-held territory in western Syria, rather than to the east near the Islamic State’s center in Raqqa city. A couple of the claims, notably that of an attack in Daraa Province in the south, are unconfirmed or erroneous:

UPDATE 2055 GMT: While Russia has been bombing in western and northern Syria, regime warplanes have been attacking in the south.

Aftermath of a strike on the Damascus suburb of Douma, where hundreds were killed by regime attacks this summer:

UPDATE 2050 GMT: About 70 of Syria’s largest rebel groups and the Syrian National Coalition have issued a joint statement rejecting the UN process for a political resolution of the crisis.

The Coalition and rebels convened an emergency meeting after Russian airstrikes began on Wednesday.

UN envoy Staffan de Mistura has spent months pursuing various initiatives, including a proposal to freeze fighting in Aleppo city and a plan this summer for transition which would turn President Assad into a ceremonial leader and block 120 members of his regime from office.

UPDATE 2040 GMT: The pro-opposition RFS News claims that more than 100 people were killed and 200 others were wounded on Friday as Russia expanded its attacks to include Islamic State-controlled areas near Aleppo city.

The site said, from a correspodent, that six airstrikes and eight barrel bombs targeted the al-Hal marketplace in al-Bab, killing at least 80 people. Three more air strikes targeted a marketplace in Deir Hafer town killing 20, while four others were slain in villages in eastern Aleppo Province.

#Syria: Aftermath pics of today's Russian airstrike on a market in the Islamic State-held city of Al-Bāb, Aleppo gov. pic.twitter.com/G5uDmzljB8

The Council said that, on the same day, regime shelling of the al-Wa’er section of Homs city killed more than 20 people, most young children, in a playground.

The Council declared, “We hereby confirm and re-confirm that all of these areas…are completely free of ISIS [the Islamic State].”

Friday prayers were cancelled in northern Homs Province because of the threat of Russian attacks.

There is a crying need for a militarily protected zone in which Assad, ISIL [the Islamic State], and Nusra can be excluded so that non-Assad governance can take root and an all-Syrian national stabilization force can be built. The ideal protected zone would be the 60 percent of Syria from which ISIL could be routed by a combination of Turkish (and other regional) ground forces and coalition air assets. One can be excused for expressing doubt that talks centering on such an operation have even been mooted. At the very least, converting the “ISIL-free zone” of northern Syria into something useful should receive high priority consideration.

See Syria Special: A Proposal for the Crisis — Safe Havens and “Internal Containment”

Former Secretary of State and Presidential candidate Hillary Clinton called for protected areas on Thursday, “I personally would be advocating now for a no-fly zone and humanitarian corridors to try to stop the carnage on the ground and from the air, to try to provide some way to take stock of what’s happening, to try to stem the flow of refugees.”

UPDATE 0630 GMT: Turkish Foreign Minister Feridun Sinirlioğlu has called on Russia to stop attacks on the Syrian opposition and civilians and focus on fighting the Islamic State.

Ankara issued a joint statement on Thursday with the US, Britain, France, Germany, and Gulf States.

Sinirlioğlu said Moscow’s airstrikes were a “further escalation” which will fuel more extremism.

Prime Minister Ahmet Davutoglu told journalists on Friday that Russia’s operations would only help the Islamic State, their supposed foe:

The outcome is very worrisome.

The operation has been entirely against positions of the Free Syrian Army.

This is clearly supporting the Syrian regime which is on the verge of collapse. I don’t think it will be of benefit to destroy the moderate opposition.

ORIGINAL ENTRY: Russia expanded airstrikes against Syria’s rebels and civilians in the second day of its bombing on Thursday, with operations in opposition-held Idlib Province in the northwest.

Russian warplanes attacked the town of Kafranbel, including a raid on the headquarters of the US-backed Suqour al-Jabal Brigade of the Free Syrian Army. They also struck in and near the city of Jisr al-Shughour near the Turkish border.

The opposition said a mosque was destroyed in Jisr al-Shughour, with at least five civilians killed.

Meanwhile, bombing by both Russian and regime jet fighters continued in both Hama and Homs Provinces, where the Russians assaulted opposition-held areas on Wednesday.

A Syrian journalist also claimed that the Russians attacked rebels in Latakia Province on the Mediterranean for the first time:

18 rebels were killed in Russian raids in Turkmen Mt in N. Latakia nearTurkey. Regime warplanes used to stay away from Turkey border

Free Syrian Army commanders in northern Syria warned that “Russian strikes are a declaration of war against the Syrians and the step towards strengthening terrorism”.

The commanders confirmed in a statement that Russian airstrikes struck FSA positions and civilian sites in Hama, Homs, Idlib and Latakia Provinces.

The Russian Defense Ministry said more than 50 warplanes carried out 30 sorties on Thursday. Bizarrely, the Ministry extended Wednesday’s lies by asserting that it hit an Islamic State training camp in Maaret al-Nu’man as well as a command post in Jisr al-Shughour.

The Islamic State has never been in either area — the opposition held Ma’aret al-Nu’man for years before rebels captured almost all of Idlib Province, including Jisr al-Shughour, this spring.

Syrian State news agency SANA adds to the deception by citing the attack on Kafranbel as a strike on an Islamic State position.

The pro-regime site al-Masdar News claims that the Russians did strike the Islamic State in Raqqa Province, attacking near Taqba airbase and “destroying the military barracks”.

The Islamic State took the base in August 2014, killing hundreds of regime soldiers in battles and subsequent executions.

After Foreign Minister Sergei Lavrov said on Wednesday that its attacks were “exclusively” against the Islamic State — the nominal reason for its escalating military intervention — the Kremlin changed its line yesterday, with spokesman Dmitri Peskov saying the aerial operations were against a “list of extremist organizations”.

However, the Foreign Minister then exposed a further contradiction in Moscow’s line — even though Free Syrian Army brigades have been among Russian targets, “we don’t consider Free Syrian Army a terrorist group,” he said.

“We believe that the Free Syrian Army should be part of the political process, like some other armed groups on the ground composed of the Syrians patriotic opposition individuals,” Lavrov added

Injured and slain children after an attack on Habit village in Habit Province (Warning — Graphic images):

The attacked site in Habit:

The head of the Free Syrian Army’s Suqour al-Jabal spoke about the Russian assault in Kafranbel, saying it included two airstrikes with 20 missiles against a training camp.

A rescue worker treats a girl wounded by Russian attack in Idlib Province: 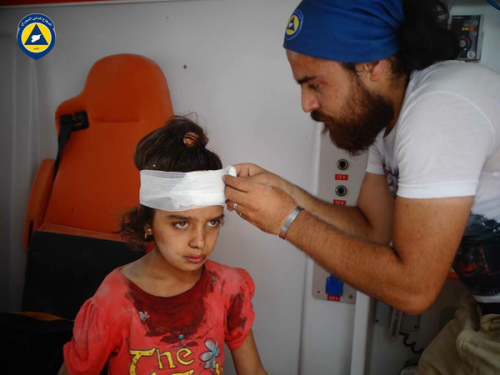 US Steps Back from Challenge to Russian Intervention

The US, which had initially criticized the Russians for not attacking the Islamic State as well as giving short notice of the operations, continued to pull back on Thursday. Instead, Pentagon officials spoke to Russian counterparts for an hour on Thursday to focus on “deconflicting”, the term used for avoidance of accidental clashes between Russian and US aerial operations.

Peter Cook, the Pentagon Press Secretary, said that the talk was “cordial and professional” and that “both sides agreed to consider the proposals and provide feedback.”

“We made crystal clear that at a minimum the priority should be the safe operation of the air crew in Syria,” Mr. Cook said.

US Secretary of State John Kerry said he expected the Russian and American militaries to follow up Thursday’s talks with further discussions: “They are working on the next meeting, and the meeting will happen, I am confident.”

Kerry did add, “What is important is Russia has to not be engaged in any activities against anybody but ISIL. We have made that very clear.”

Deputy Foreign Minister Ilya Rogachev suggested on Thursday that Moscow would be receptive to an invitation by the Iraqi Government to assist in the fight against the Islamic State.

However, during a news conference at the UN, Lavrov said there were no immediate plans to hit targets in Iraq. “We were not invited. We were not asked,” he said. “We are polite people.”

Saudi Arabia Says It Will Respond

The Saudi Foreign Minister, Adel al-Jubeir, offers an intriguing response when asked about the response of Riyadh — a leading supporter of Syria’s rebels — to the Russian airstrikes.

Rebels to Civilians: Don’t Use Kurdish-Controlled Crossing in Aleppo City

The rebel Aleppo Operation Room has warned civilians not to use a crossing in Aleppo city opened by the Kurdish militia YPG this week for links with a regime-controlled area.

After days of clashes, the YPG established the crossing in the Sheikh Maqsoud area of Aleppo.

Civilians already avoid the crossing because of occasional rebel shelling.