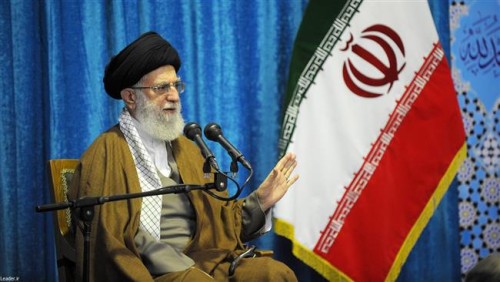 Iran’s Supreme Leader avoided comment on the escalating crisis in Syria, with Russia beginning airstrikes, in a statement to military commanders on Thursday.

Ayatollah Khamenei made no reference to the role of Tehran, the main supporter of the Assad regime along with Moscow, in the developing conflict. Instead, he issued general comments about Iran’s strength and its enemies

The system of the Islamic Republic is an independent system; and has, since the [1979] Revolution, openly pursued its policies and does not fear the roar of any power or opposing any power’s policies.

The emergence of an independent nation that is opposed to the bullies and their affiliates is not tolerable for the hegemonic system.

Armed forces should accelerate progress& readiness to a level of authority that enemies would not dare thinking of aggression against #Iran.

Iran’s military has been instrumental in the Assad regime’s 4 1/2-year campaign against the opposition and rebels. Tehran oversaw the creation of the National Defense Forces, the militia supplementing the Syrian Army, and has provided commanders for training and operations. Iranian fighters have also been involved in the conflict, as have Iraqi militia and Afghan emigrants supervised by the Islamic Republic’s officers.

However, there are signs that Russia’s escalating intervention is replacing Iran in areas of Syria, with reports of Russian “advisors” taking over the supervision of the Assad militia.

Iran has also been sidelined in Moscow’s political initiative for high-level political talks to maintain President Assad in power during a “transition”.

A “Damascus-based diplomat” explained, “The Iranians told the Russians bluntly: if you don’t intervene, Bashar al-Assad will fall, and we are not in a position to keep propping him up.”