Syria Daily, Oct 24: No Agreement at Russia-US-Turkey-Saudi Meeting Over Assad 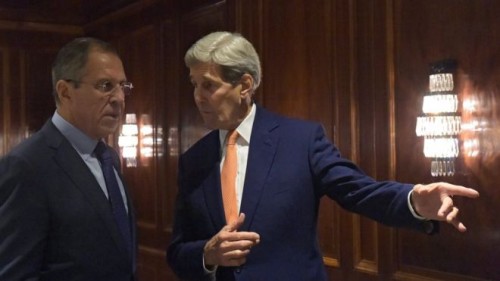 Lavrov’s remarks to State TV appeared to extended President Vladimir Putin’s assertion on Thursday that President Assad is prepared to negotiate with an acceptable opposition:

External players can not decide anything for the Syrians. We must force them to come up with a plan for their country where the interests of every religious, ethnic and political group will be well protected.

Of course they need to prepare for both Parliamentary and Presidential elections.

Lavrov said that Moscow was ready to provide air support to the Free Syrian Army if it is ready to fight “terrorists” and if the US will help Moscow identify “the patriotic opposition”.

Moscow has repeatedly said it will bolster an anti-terrorist force while doubting whether that force exists among Syria’s rebels. At the outset of Russia’s bombing campaign, Lavrov declared that the Free Syrian Army was a “phantom”.

ORIGINAL ENTRY: Russia has failed to get agreement from the US, Saudi Arabia, and Turkey on a plan for political talks which would maintain Syria’s President Assad in power for the short-term.

Russian Foreign Minister Sergei Lavrov met counterparts from the other three countries in Vienna on Friday. Saudi Foreign Minister Adel al-Jubeir said afterwards that, while there was no endorsement of Moscow’s proposal, consultations would continue:

There still remain some gaps with regards to the departure of Bashar al-Assad and the timing of such a departure. We will continue such conversations perhaps with a broader range of countries in order to see if we arrive at a consensus on the way forward for Syria.

US Secretary of State John Kerry said the talks were “constructive” and foresaw that “expanded” discussions could take place next week. He said he could see an outcome even if there was current disagreement on the Syrian President’s role: “While we can agree to disagree on what and when might occur with respect to the Assad problem, we clearly can agree on a process that helps bring about a resolution to that problem.”

Kerry emphasized, “Russia wants to see that Daesh [Islamic State] and other extremists are eliminated from the scene.”

Lavrov continued to press Russia’s case in comments to journalists, saying that Iran and Egypt should be brought into the negotiations, despite Kerry’s rejection of Tehran in the process, “We’re not at that moment at this point in time”.

The Russian Foreign Minister maintained that Assad’s resignation had not been discussed at the four-power meeting. He repeated the line of President Vladimir Putin, set out in a Thursday conference, that Assad could negotiate with an acceptable Syrian opposition:

Our common position is that we need to boost efforts for the political process in the Syrian settlement.

This foresees the start of full-scale talks between representatives of the Syrian government and the full spectrum of the Syrian opposition, both domestic and external — with the support of outside players.

However, the Kremlin limited Lavrov’s statement on Friday with the declaration that all rebels — and presumably the opposition groups linked to them — are “terrorists”.

The Russian Foreign Minister also said that Moscow and Jordan had agreed on a coordination center in Amman for military activities including Russia’s airstrikes which began on September 30.

Turkish President Erdoğan: We Will Not Allow Kurds to Control Northern Syria

Speaking in southeast Turkey, Erdoğan denounced last week’s merging of the town of Tel Abyad, on the Turkish border, with the three autonomous Kurdish cantons.

“All they want is to seize northern Syria entirely,” Erdoğan said. “We will under no circumstances allow northern Syria to become a victim of their scheming. Because this constitutes a threat for us, and it is not possible for us as Turkey to say ‘yes’ to this threat.”

Tel Abyad was captured in June by the Kurdish militia YPG from the Islamic State. It links the Kobani canton in north-central Syria with the Jazeera canton further to the east and the Iraqi border.

Erdoğan also criticized the Kurdistan Democratic Party (PYD), the political leadership for the YPG, and those who support it by linking the PYD to the Turkish Kurdish insurgency PKK:

Right now there are 1,400 PKK members in PYD. There is no point ignoring this, this is a fact.

But all these countries who seem friendly towards us are trying to make this look the opposite way. Whatever arms assistance they [PYD] receive, it is coming from these countries. We know very well whose arms.

Claim: Russia Sets Up Helicopter Base in Homs Province, as Rebels Damage One Copter

Pro-opposition activists are claiming that Russia has set up another airbase, this time in al-Ashrafiyah in northern Homs Province for its helicopter operations:

Russia’s initial base for its military intervention was in Latakia Province in western Syria. However, as its bombing campaign has developed, it has also established a base in Qamishli Airport in northeastern Syria — halting civilian flights in the process — for attacks on the Islamic State in Deir ez-Zor Province.

Meanwhile, rebels are claiming that this footage shows opposition fire damaging a Russian helicopter in the area, forcing it to make an emergency landing.

Video: Syrian Military Claims Recapture of Base in Quneitra in Southwest

Claimed footage of regime troops after the recapture of the 4th Battalion Base in Quneitra Province in southwest Syria:

Rebels hold much of Quneitra and have been pursuing an offensive to link their territory with opposition-held areas in West Ghouta near Damascus.

The immediate aftermath of a regime airstrike on Killi in Idlib Province on Friday — civil defense workers said at least three children were killed: