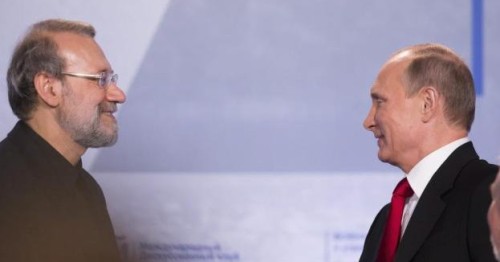 Iran has given high-profile backing to Russia’s bombing in Syria, as Moscow seeks high-level talks to keep President Assad in power in the short term and amid rising casualties for Iranian troops fighting alongside the Syrian military.

Speaker of Parliament Ali Larijani joined Russian President Vladimir Putin in the resort town of Sochi on Thursday to tell a meeting that Moscow’s air attacks, mainly on Syrian rebels, had sent a “serious warning”. He said the attacks should encourage other “anti-terror governments” to act.

Larijani also repeated criticism of the US and its allies, declaring that weapons sent to rebels had ended up in the hands of groups like the “Al Qa’eda-linked” Jabhat al-Nusra.

The Speaker’s words echoed those of Putin, who put pressure on Washington — ahead of an important meeting of Foreign Ministers on Friday — with the assertion:

It’s always difficult to play a double game: declaring a fight against terrorists while simultaneously trying to use some of them to arrange the pieces on the Middle East chess board in one’s own interests.

Iran has given essential political, economic, and military support to the Assad regime since the Syrian uprising began in March 2011. In recent weeks, it has accompanied the Russian bombing and a six-front ground offensive — five of them against rebels — with more insertions of Iraqi and Pakistani militia and Iranian commanders.

Since October 8, at least four of those commanders — including the overall commander of the Syrian operation, Hossein Hamedani — and eight soldiers have been killed.

CEO of Instant Messaging Service: Government Demanded That We Allow Spying on Users

The CEO of the instant messaging service Telegram has said that the Government asked the company to spy on its users in Iran.

Pavel Durov said on Twitter on Tuesday that the Telecommunications Ministry blocked the service when it did not comply:

@CDA Iranian ministry of ICT demanded that @telegram provided them with spying and censorship tools. We ignored the demand, they blocked us.

Durov said that the company is working on a P2P solution to get around the block.

The Ministry’s Mohammadreza Farnaghizad said on Tuesday that Telegram had not been blocked, but reports from Iran said the service had been intermittently disrupted and Durov tweeted that there was a complete blockage for two hours.

Unlike Twitter and Facebook, Telegram is not filtered in Iran. Major publications inside and outside the country, such as BBC Persian and the Voice of America, have created channels on the service, and President Rouhani’s office have announced that they will soon join.

Completing the process of the approval of the nuclear deal, President Rouhani has welcomed the Supreme Leader’s endorsement of the agreement with the 5+1 Powers.

On Wednesday, Ayatollah Khamenei published a letter to Rouhani confirming the passage of the Joint Comprehensive Plan of Action by Parliament and the Guardian Council, while setting some conditions to be met during the implementation phase.

Rouhani assured Khamenei that the “fulfillment of the opposing party’s commitments” will be monitored with “complete vigilance” and specifically met the Supreme Leader’s command that sanctions must be lifted as soon as Iranian compliance is verified by the International Atomic Energy Agency. The President assured that both President Obama and the European Union had already provided “written and formal” announcements of the complete removal of the sanctions, enabling Iran to begin a “new chapter” within Khamenei’s framework of the “Resistance Economy”.

The President concluded, “The JCPOA’s ‘win-win’ approach has caught the world’s attention as a model for the peaceful resolution of complex global problems.”

Deputy Foreign Minister Abbas Araqchi offered a response to each of the Supreme Leader’s conditions, beginning with the assurance of sanctions relief:

[Obama] has issued the necessary order for all required officials to be prepared and [to] nullify sanctions on the appointed day that the [International Atomic Energy] Agency announced [Iranian compliance]….This order has also been registered in America’s official [legal] gazette and has now found the proper legal form.

However, Araqchi turned Khamenei’s second condition — over the re-design of the Arak heavy-water reactor to reduce its plutonium by-product and the movement of enriched uranium outside the Islamic Republic — on the US and its allies, saying that the file on the possible military dimensions (PMD) of Iran’s nuclear program must be closed before concluded before Iran takes those steps.

The Minister also gave a token affirmation of Khamenei’s posture that Iran can reach a goal of 190,000 Separative Work Units — 20 times the current level of its uranium enrichment — once the JCPOA’s time limit of 15 years expires.