BBC Radio: US Bombs a Hospital — What Happens Now? 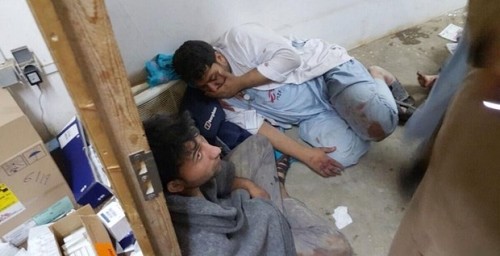 PHOTO: Injured Medecins Sans Frontieres staff after Saturday’s US bombing of an MSF hospital in Kunduz in Afghanistan (AP)

Early Saturday morning US warplanes carries out a series of bombing raids for more than an hour on a hospital in Kunduz in northern Afghanistan, killing 22 people including a dozen medical staff and seven patients.

Medecins Sans Frontieres, who ran the hospital, have called the incident a “war crime” and demanded an international investigation.

The US military says it was targeting Taliban insurgents, who have taken part of Kunduz, inside the compound. MSF denies that any Taliban fighters were present.

The Pentagon has yet to offer an apology to MSF or the families of the slain Afghans.

So what is the likely aftermath of the bombing? And what of the wider issues, including the fight against the Taliban almost 14 years after it was forced out of power in a US-supported war?

I addressed the questions with BBC Radio Wales on Monday morning.

This hospital will now close, and it was the only facility in northern Afghanistan providing trauma care. That’s just one more blow to the long-term effort to stabilize Afghanistan through providing services.