Iran Daily, Sept 10: Supreme Leader Pushes Back Against His President 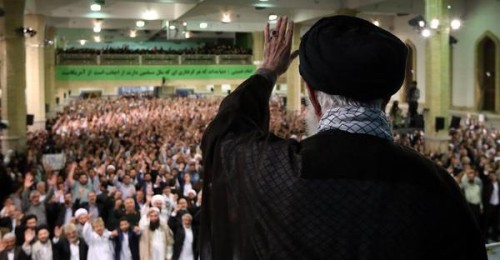 Iran’s Supreme Leader has again cautioned President Rouhani against political efforts, ahead of key elections next February, seeking to curb the power of institutions within the regime.

While Ayatollah Khamenei repeated his denunciation of the US in a speech on Wednesday in Tehran, his most significant remarks were about Iran’s domestic political contest.

Rouhani said earlier this month that the 12-member Guardian Council should not be allowed to vet and disqualify candidates for the Presidency, Parliament, Assembly of Experts, and other bodies. He was immediately challenged by members of the Council, which has been key in defining who is “acceptable” in the Iranian system since the 1990s; leading critics; and MPs who have been critical of the Government.

He then jabbed at Rouhani, without naming him, by linking him to mass protests after the disputed 2009 Presidential election:

Some objections [to the Guardian Council’s rights] are gratuitous….

Elections in Iran are in conformity with the international laws, being regarded as the safest and best elections in the world. Some ill-wishers inside the country, however, try to harm the sound elections and always talk about vote-rigging and cast doubt about soundness of elections in the country.

The political battle has escalated because of elections for Parliament and the Assembly of Elections in February. Rouhani and his allies, notably former President Hashemi Rafsanjani, are trying to build a bloc to counter the conservatives and hardliners who dominate Parliament — in part because of the suppression of reformists by the regime and the Guardian Council — and criticize the Government.

The battle is also linked to the contest over the July 14 nuclear deal and Rouhani’s foreign policy of “engagement”. On Wednesday, the Supreme Leader maintained his cautious approach over the deal — with some MPs demanding a formal vote on the agreement — and the Government’s negotiations with European countries, while he aimed at the US:

We agreed to hold negotiations only on the nuclear issue…and thank God, our negotiators appeared to have done a good job in this field; however, in other areas we are not negotiating with America.

Of course we [Iran] will enter negotiations…with all countries at various levels — state, tribal, and religious — except for the Great Satan.

Meanwhile, after the Supreme Leader’s intervention last week, the Government appeared to give ground on its demand that the Supreme National Security Council is the only body to approve the nuclear deal, with Parliament just issuing an advisory opinion.

The administration had offered its official view, which was presenting the JCPOA [Joint Comprehensive Plan of Action] to Parliament was not necessary. However, the Supreme Leader indicated that the Parliament must not be sidelined on reviewing the JCPOA.

Considering the remarks by the Supreme Leader — who is the ultimate authority for the administration –– the JCPOA is currently being reviewed in Parliament and the administration will grant any assistance and necessary information for the review.

Vote in US Senate Paves Way for Implementation of Nuclear Deal

Opponents of the July 14 nuclear deal in the US Congress have failed to pass a vote of disapproval, paving the way for the implementation of the agreement.

The anti-deal faction, consisting of almost all Republicans, failed to pass a cloture motion on Thursday.

The motion, which would have closed off discussion so a resolution of “disapproval” could be considered, needed 60 votes to pass. The final tally was 58-42.

The outcome means President Obama will not have to veto the disapproval resolution, and the nuclear deal can move towards implementation.

Attention now turns to Iran to see if the regime gives its formal support. Anti-deal MPs have insisted on a Parliamentary vote.