Iran Analysis: Rouhani-Rafsanjani Bloc Steps Up Its Political Challenge, Ahead of 2016 Elections 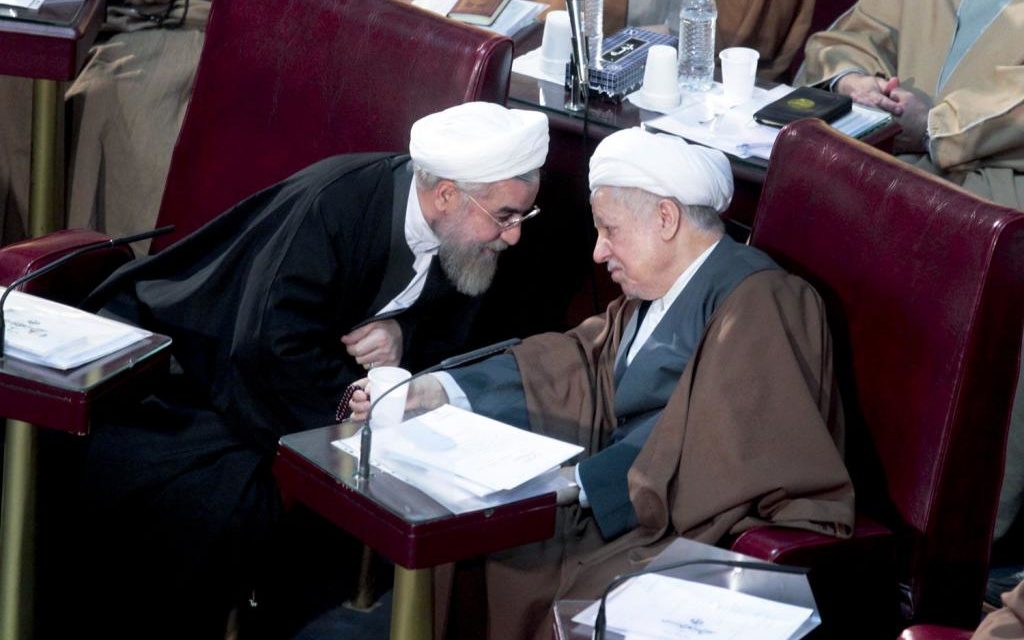 President Rouhani and his allies — notably Rouhani’s mentor, former President Hashemi Rafsanjani — are stepping up their challenge to political opponents ahead of important elections in February 2016.

In a series of developments in the past week, Rouhani, Rafsanjani, and other high-profile officials have staked out their ground, not only against hardliners but also the Revolutionary Guards and even the Supreme Leader.

The maneuvers are preparing for both the election of MPs and the choice of the chair of the Assembly of Experts, the body that chooses the Supreme Leader and can nominally replace him.

Rouhani signalled his intentions last week with a forthright statement that the powers of the Guardian Council, which has controlled Iran’s elections for more than two decades, should be curbed. The President claimed the Council should not be allowed to say which candidates can stand for Parliament and the Presidency, saying its role is only supervisory.

The remarks prompted hostile responses from some members of the Council and the Assembly of Experts. On Monday, Ayatollah Ahmad Khatami — a Tehran Friday Prayer leader and Assembly member — said, “The Guardian Council has the duty to consider the sensitive issues and stand against individuals in the elections who seek to monopolize Parliament with wealth”, probably a reference to Rafsanjani.

Khatami also referred back to the mass protests after the disputed 2009 Presidential election, saying the Council “must follow its duties to society and not let the political system be damaged”.

Meanwhile, the head of the Revolutionary Guards, General Mohammad Ali Jafari, lashed out at Rouhani’s foreign policy of “engagement”, including discussions with Western states: “Those who want to contradict the principles of the Revolution and [undermine] the orders of the Supreme Leader — to open new holes for foreign influence in the country — should know that we will never allow the growth and implementation of such thinking.”

Jafari’s concern also points to a contest on the economic front, with the Guards’ extensive holdings facing the competition of foreign investment after the July 14 nuclear deal.

However, far from giving way, the President pushed back against the Guards: “The resolution of the nuclear issue is a topic which…can rectify economic issues and problems, produce prosperity, create employment for young people, and can event create conditions in which we aid and assist neighboring countries who are suffering.”

This weekend prominent MP Ali Motahari, a relative of Speaker of Parliament Ali Larijani, went farther. He told General Jafari that Ayatollah Khomeini, establishing the Islamic Republic, had prohibited the armed forces from intervening in politics.

Meanwhile, Rafsanjani was building alliances with a trip to Iran’s second city Mashhad. He met Grand Ayatollahs Shobeiri Zanjani and Sane’i — both critics of the regime’s crackdown on dissent after the 2009 Presidential election — and Ayatollah Abbas Vaez Abbasi, who controls the funds of a large religious foundation.

The former President has battled for years with hardliners, including his removal as Tehran Friday Prayer leader after a 2009 sermon supporting the right to protest. However, he has had a political revival under Rouhani, even with his son Mehdi Hashemi sentenced to prison for 10 years on fraud charges.

Rafsanjani used the occasion of the anniversary of the death of Shia’s 8th Imam, who is buried in Mashhad, to visit the Ayatollahs. His meeting with Ayatollah Vaezi Tabasi was particularly significant — the latter has indirectly criticized the Supreme Leader for his support for former President Ahmadinejad Ahmadinejad and for appointing the hardline Ayatollah Alamolhoda Mashhad’s Friday Prayer Leader.

Introduced by Vaezi Tabasi as “a dear and revolutionary brother and a true son of Imam Khomeini, Rafsanjani told an audience that the policies of Ahmadinejad “were so strange that those who elevated Ahmadinejad to the level of holiness must now be held accountable for allowing such a deviation in the Islamic Revolution”.

In a second speech, Rafsanjani chided the Guardian Council for disqualifying his candidacy in the 2013 Presidential election: “My role in the 2013 election was just a simple registration which you saw what effect it had in the country. It resulted in Mr. Rouhani’s election who is working hard with more energy and motivation.”

The former President made clear to the keen observer that he was also speaking about the need to confront Ayatollah Khamenei. In his meeting with Grand Ayatollahs Shobeiri Zanjani and Sane’i, he said, “You were with Imam Khomeini in all stages of the struggle against Shah and hence I hope that you help to make sure the legacy of Imam is kept alive and away from deviation.”

Shobeiri Zanjani replied to Rafsanjani, “At the moment, we do not have anyone knowing Islamic Revolution better than you….It is necessary that you narrate for the nation the true account of the Islamic Revolution History up to now.”

Rafsanjani’s challenge to the Supreme Leader built upon an intervention by his daughter Fatemeh last week, when she spoke about Mehdi Hashemi’s prison sentence. She said that, if the trial proceedings were not made public, she would speak about parts of them. She indicated that the revelations go to the highest levels of the Islamic Republic, pointing to claims about how the Supreme Leader’s Mojtaba accumulated a personal fortune.

Claims have circulated for years about Mojtaba Khamenei’s wealth and influence, including allegations of gold transactions and rigging of the 2009 election.

In the last 48 hours, the Rouhani-Rafsanjani camp have played the Khomeini card, invoking the spirit of the late leader of the Islamic Republic.

On Monday, the President used a visit to Khomeini’s mausoleum to proclaim the Ayatollah’s commitment to the wishes of the Iranian people — the far-from-coded challenge to the powers held by institution within the regime:

Our task is to protect the glory which was brought to us by Imam Khomeini from isolation and negligence; we must preserve the glorious Islam that Imam interpreted for the people in the best way, as well as the political Islam with the power of leadership which Imam Khomeini offered to us.

The Imam showed respect towards people from all social status, but gave a special consideration to the poor, the youth and the women in society.

Rouhani had an influential supporter: Khomeini’s grandson Hassan also proclaimed the late Imam’s commmitment to ensuring that fulfillment of the will of the people was the priority of the Islamic Republic.