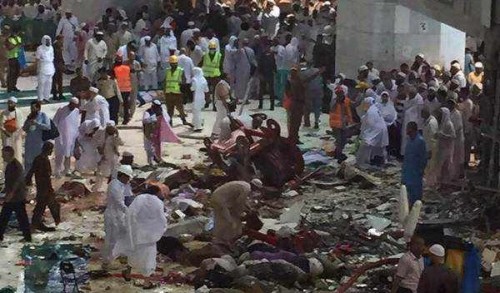 PHOTO: The scene of last Friday’s crane accident in Mecca in Saudi Arabia

In his Sunday condolences to families of victims, Speaker of Parliament Ali Larijani denounced the Saudi monarchy for its “negligence” and failure to take “appropriate measures” to save lives.

Fars News, the outlet of the Revolutionary Guards, quickly took advantage of Friday’s accident. It said the crane which crashed into the Grand Mosque belonged to a company owned by a son of King Salman. On Sunday, it featured a statement by one of Iran’s Sunni MPs which said Saudi Arabia should no longer be in charge of arrangements for the Hajj pilgrimage to Mecca.

Grand Ayatollah Nasser Makarem Shirazi told an audience in the holy city of Qom on Saturday, “The al-Saud [monarchy] is not capable of administering the affairs of Grand Mosque. At a time when millions of pilgrims are present in this mosque, why should a crane be there? This action of theirs is not wise.”

He asserted that Muslim scholars have to teach Saudi rulers about how to manage the Grand Mosque.

And the Supreme Leader’s put out a Twitter message which offered condolences to the Iranian victims — eight killed, 32 wounded, and three missing — but not to others:

Following up latest conditions of the injured in #Mecca crash, Leader of Revolution’s condolence was conveyed over death of Iranians.

The criticism further dents the hopes of the Rouhani Government for engagement with Saudi Arabia, trying to build on the July 14 nuclear agreement to deal with crises in areas such as Syria, Yemen, and Iraq.

The initiative has been firmly opposed by Iran’s hardliners, including among the Revolutionary Guards and Parliament. The Supreme Leader has also offered no public encouragement, although the Foreign Ministry continues to talk of the need for Saudi Arabia to be part of regional “solutions”.

Labour activist Shahrokh Zamani, imprisoned since 2011, was found dead in his cell in Rejaishahr Prison on Sunday.

Preliminary investigation found the cause of death as a stroke.

A founding member of the Committee for the Establishment of Independent trade Unions for Construction Workers and Painters, Zamani was arrested in Tabriz in June 2011 and sentenced to 11 years in prison for establishing an anti-regime group and assembly and collusion against national security.

Zamani had gone on hunger strikes for long periods on several occasions over his arrest and poor prison conditions.