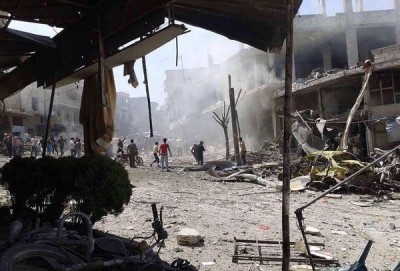 The Assad regime’s forces killed more than 3000 people in opposition-held Idlib Province in northwest Syria from May 1 to June 30, according to a report from the pro-opposition Syrian Network for Human Rights.

The regime was responsible for more than 86% of the killings in the province, almost all of which was captured by rebels this spring.

Aftermath of airstrike on Janoudiyeh in early June which killed more than 60 people:

Despite holding only a small area of Idlib, regime forces arrested 689 people, including 45 children and 67 women. Jabhat al-Nusra was second in detentions with 205, with the Islamic State-affiliated Jund al-Aqsa seizing 45 and rebel groups detaining 31.