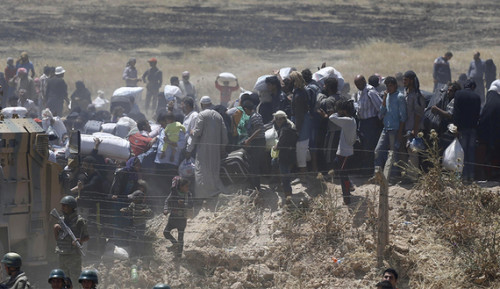 Almost 2 million Syrian refugees are registered in Turkey, but stories have mounted this month of Turkish forces stepping up measures against border crossings — to the point of shooting some of those making the attempt.

Haid Haid of the Heinrich Böll Stiftung in Beirut writes for NOW:

A: I couldn’t enter today. I was shot at so I had to go back.

B: What? That’s not possible! Did you go the smuggler I told you about?

A: Yes, he told me that everything would be ok, but as soon as I tried to cross, they started shooting.

B: Damn it. I will try to find another smuggler and get back to you. Stay safe.

This is part of one of many conversations I witnessed during the last few months in Turkey.

Entering Turkey illegally has been the only way for the majority of Syrians crossing over since 9 March, when Turkish authorities closed the last two border crossings with Syria. Although these border gates were allegedly closed temporarily as a security precaution, the gates remained shut, making it impossible for Syrians to cross while trucks continue to carry aid and authorized trade into Syria.

Many Syrians still believe that this measure is temporary, with some linking the border closings to the fact that there has been solid information about a series of terrorist attacks against Turkey, while others are linking them to the Turkish parliamentarian elections that took place in June this year. Many Syrians continue to circulating rumors about the border reopening, but the closure indicates a significant shift in Turkey’s policy towards Syrians. After four years of maintaining an open-door policy this was the first step, among others, to keep Syrians out.

On August 13, Turkey began building a three-meter-high wall in the Reyhanli District of Hatay Province. The military is reinforcing the wall with four-meter ditches behind the wall to stop smuggling, illegal migration, and terrorist attacks by the Islamic State.

While this wall can’t really secure Turkey’s border, it could prove an efficient means of keeping Syrians out. And instead of installing this wall along the areas controlled by ISIS, it’s located in Idlib Province, which is controlled by rebels allied with Turkey. The wall’s small size — 8 kilometers of the 900-kilometer border with Syria — might be seen as a symbolic gesture from Turkey’s ruling AKP to win back the votes they lost because of their open-door policy, especially as this area is considered the most active spot for smuggling Syrians into Turkey.

The most recent procedure was published by Bab al-Hawa Border Crossing Management on August 14. This gives Syrians who want to emigrate from Turkey a week’s time to do so. Applicants must submit all their documents, provide a personal guarantor, deposit $150, and wait to be permitted to enter Turkey. If for any reason they don’t leave Turkey within the allotted time, they lose their deposit and their guarantor is to be held responsible. The crossing management highlighted that Turkey would stop this service if more than five Syrians abused the policy by deciding to stay in Turkey. This shows that the new procedures are not focused solely on security threats but also on preventing more Syrians from entering the country.

The case of A and B in the dialogue above was a less fraught one. A is a Syrian activist who was trying to get into Turkey to attend a workshop he’d been invited to in Gaziantep.

Stories of families trying to secure a safe refuge in Turkey tend to be a lot more horrible. A friend of mine works with a Turkish humanitarian NGO in Urfa, southeastern Turkey. He recently found two girls — 7 and 9 years old — while working near the Turkish border. They were crying and walking with no place to go after they’d been separated from the rest of their family, which had been trying to cross illegally. He told me another story about a mother who left her son in no-man’s-land when guards started shooting at them. She still does not know what has become of him.

Despite all the challenges and risks that come with entering Turkey illegally, many Syrians, especially residents of northern Syria, see Turkey as the only chance of starting a new, safe life. As such, it’s become increasingly common to read of handfuls of people getting killed while trying make it to Turkey. Turkey continues to deny that it’s been killing Syrians trying to cross into its territory.

Turkey’s border closing went nearly unnoticed for many reasons: it was announced as a temporary measure; Turkey hosts the largest number of Syrian refugees; the Syrian opposition avoids criticizing Turkey because it is a strategic ally and the international community has not done much for Syrian refugees; and EU countries are happy with any measure that might control the flow of illegal refugees, especially considering that Turkey is now central platform by which Syrians are attempting to reach Europe.

The closings and restrictions may have gone largely unnoticed, but Turkey’s actions have turned Syria into a trap in which there’s no place to turn to for refuge. Jordan hasn’t allowed Syrians to enter for over two years except in rare, exceptional cases. Since January, Lebanon has made it extremely difficult for Syrians to enter and even more difficult to stay there legally. The only country that had left its doors open was Turkey but this has changed for those crossing by land.

The negative consequences of such actions go beyond internal displacement and refugees — they are also harming Syrian activists and civil society actors. Activists have used Turkey as a base to receive training, to meet donors, and to advocate, network and coordinate. Such a loss will affect the present dynamics of Syria and their future as well.

It’s important to acknowledge the generous hospitality Turkey has shown and continues to show Syrians. It’s still the only country Syrians can fly to without a visa; the services it provides Syrian refugees are the best in the region; and Syrians can stay and work legally, etc. But these are not reasons enough to stop calling on all actors, regionally and internationally, to claim responsibility and protect Syrians by all means. Border security is no excuse for depriving Syrians of refuge and by no means does it justify shooting civilians when it’s clear that all they seek is their own safety.