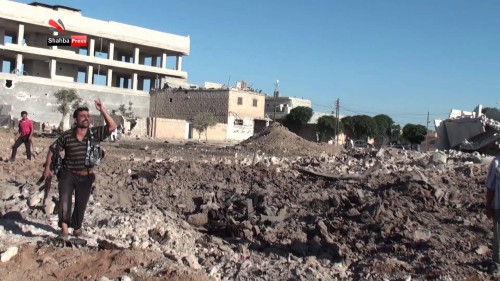 PHOTO: Scene of an Islamic State vehicle bomb in Mare’ in northern Aleppo Province on Tuesday

Rebel and opposition concern is rising about an Islamic State offensive in northern Aleppo Province, near Syria’s border with Turkey, as the militants close on the town of Mare’.

The Islamic State surrounded Mare’, north of Aleppo city and 20 km (13 miles) from the Turkish border, with the capture of five villages on Thursday. A rebel counter-attack pushed the Islamic State away from the town, inflicting scores of casualties, but the opposition is still on the defensive.

The rebel coalition Sham Front has declared a military zone in Azaz, to the west of Mare’, for security and as a staging area for reinforcements. 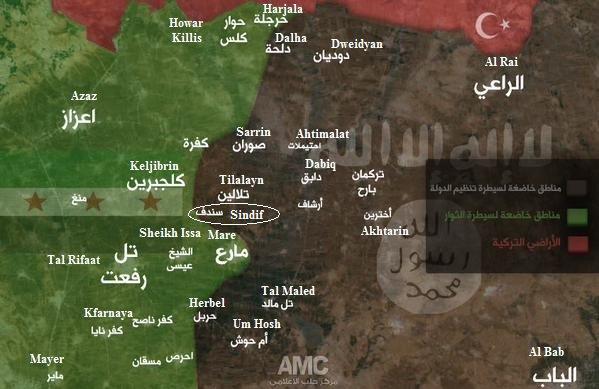 Despite reports of an airstrike by the US-led coalition near the villages taken by IS, there was sharp criticism of inaction by both Washington and Turkey, who have proposed the clearing of the Islamic State from a 98-km (61-mile) area along the border.

Mare’ is at the western end of the area, which runs along Aleppo Province to Jarablus.

The Islamic State has been battling the rebels in northern Aleppo Province since January 2014. The militants have pressed for months along the frontline from the border to the Aleppo city suburbs, but had been held until this week.

Rebels are fighting the Islamic State at the same time that they are battling regime forces in and near Aleppo city. This week, the Jaish al-Fateh coalition tried to take the village of Bashkoy to the north of Aleppo, and to advance in the west of the city.

The latest Islamic State attacks included a vehicle bomb on Mare’, followed by incursions into the town.

Fighting at the edge of Mare’:

Fighting in the village of Sandaf — rebels are claiming that they retook the village and killed retreating Islamic State fighters:

The Syrian Kurdish militia YPG have launched an offensive against the Islamic State outside Jarablus in northern Aleppo Province, inside the “safe zone” proposed by Turkey.

“The YPG successfully carried out its first operation to breach ISIS defensive lines west of the Euphrates River on Thursday night, managing to kill 12 of members of the group to the East of Jarablus,” the Kurdish outlet Bas News reported on Friday.

A Kurdish military source said that a group of YPG fighters crossed secretly on boats to the west bank of the Euphrates River and confronted the Islamic State. The source claimed 12 militants were killed and several injured.

Last week, the YPG’s general commander said his forces would “liberate Jarablus”, at the eastern end of the 98-km (61-mile) strip along the Turkish border.

In late July, Turkey — as it attacked both the Islamic State inside Syria and the Turkish Kurdish insurgency PKK in northern Iraq — fired artillery on YPG units who were advancing on Jarablus but still on the eastern bank of the Euphrates.

As part of a report on enforced disappearances around the world, Amnesty International notes:

In Syria almost 85,000 people have been forcibly disappeared between 2011 and 2015….Civilians continue to be disappeared at an alarming rate with those documented by the organisation now including new groups, not only political opponents, human rights defenders and activists, but people such as teachers and civilians who have merely crossed into government controlled territory to collect state salaries.

Amnesty cites the case of Rania al-Abbasi and her six children, aged between 3 and 15, who were arrested by regime authorities in March 2013. None of the family has been heard from since.

When the uprising started, she did not want to leave. She thought she and her family were safe because they had not participated in any political activities or belonged to any opposition party. They did not go to any demonstrations. So she thought nothing would happen to them.

A demonstration in Yalda, south of Damascus, expresses solidarity with besieged areas such as Zabadani, Darayya, and Yarmouk:

Yalda is near the Yarmouk camp, which has been cut off by the Syrian military since July 2012 and is partially occupied by the Islamic State.

More than half of Syria’s hospitals have been damaged or destroyed since March 2011, according to Dr. Carlos Francisco, the head of Syrian operations for Médecins sans Frontières.

In an interview with Syria Direct, Francisco noted a regime “campaign of barrel bombs” in Aleppo Province in May and June:

Out of 37 hospitals in Aleppo governorate, 10 of them, 30% were damaged by barrel bombs. Amongst this…are the five biggest hospitals, giving the most specialized trauma and life-saving support. All of them were closed at least for several days until they managed to re-organize, or in some cases to find new locations.

They were not only hospitals, but medical points; the blood bank was also damaged. The ambulance organization system was also targeted and some of the ambulances and medical staff were lost.

He concluded, “We estimate that it will take between 20 and 30 years to recover the medical capacity before the war. Every day it is getting worse because we see every day the medical institutions are targeted and damaged and medical staff are killed or they are fleeing.”