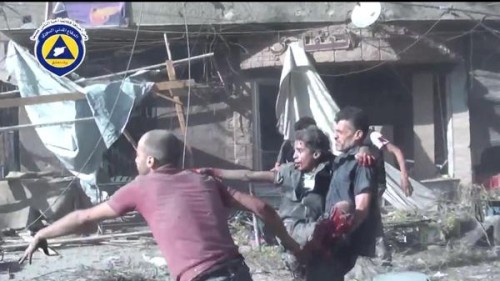 PHOTO: Rescuers carry a wounded child after a regime airstrike on a market in Saqba, east of Damascus, on Sunday

Aftermath of a strike on Douma:

Doctors in Douma protest for a humanitarian truce: 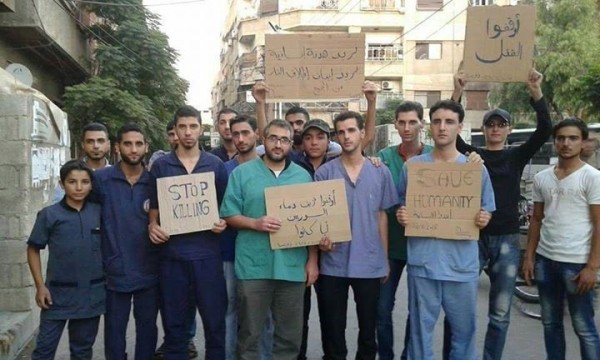 In northwest Syria, more than 30 civilians have reportedly been killed by airstrikes on Jisr al-Shughour city and the town of Al Bara.

Syrian warplanes and missiles struck areas to the east and northeast such as Douma, Saqba, and Harasta and the southwestern suburb of Darayya. The Local Coordination Committees verified 58 casualties near Damascus, among 85 across the country on Sunday.

On August 16, at least 112 people were killed and more than 550 wounded in Douma when a vegetable market was hit by vacuum missiles. Dozens more died on Saturday from further bombing, including the destruction of a four-story building. Many of the victims were children.

A first responder, Muhammad Khobbiah, told the story of a 23-member family trapped in the rubble of the four-story block. While three were dug out, the other 20 were pinned in the wreckage:

We heard the screams of the people in the upper levels for three hours straight, unable to do anything. As the Civil Defense tried to use a winch to lift the rubble, the roof collapsed, killing all those who were in the upper floors.

Smoke on the streets of Douma after Sunday’s attacks:

A small girl is rescued in Douma after Saturday’s assault:

Aftermath of an attack on Saqba, with bodies being pulled from the debris (Warning — Graphic):

A barrel bomb falls on Darayya:

The Assad regime has tried for years to break the rebels and civilians through sieges and airstrikes; however, the attacks have escalated in 2015. The surge may be due in part to fears of rebel advances around Damascus — this month, the opposition has advanced in Darayya and attacked regime positions in Harasta.

On Sunday, State media claimed that 11 people were slain and 60 wounded in Damascus by rebel mortars. However, activists claimed that the regime fired on the Damascus Central Prison, northeast of the capital, to kill visitors and blame the opposition.

The air force also barrel-bombed Daraa city in southern Syria, where rebels have been trying to take regime-controlled areas:

In contrast to the attention paid to the August 16 attack on Douma, international media said little about this weekend’s assault. Monday’s headlines are likely to be about the Islamic State’s damage to a Roman shrine in Palmyra in central Syria.

With my thanks to those who convey our suffering, you cannot imagine its magnitude because you have not lived it.

Hearing is not the same as seeing.

Refuting the original line of State media, pro-Assad accounts are circulating photos of five troops whom they say were killed by an Israeli airstrike last Friday:

The 5 soldiers killed by the Israeli Air Force on Friday. May they rest in peace pic.twitter.com/hWJnMAfRDQ

Syrian TV had maintained that the Israelis had hit a “civilian car” in the attack in Quneitra Province, near the Israeli-occupied Golan Heights.

The attack follows a series of Israeli air raids on military posts from Quneitra to Damascus Province, following the launch of four rockets from Syria into the Golan Heights and northern Galilee.

The Sham Front and Ahrar al-Sham faction shut down all traffic, supply trucks. They claim that Turkish staff have blocked people’s movement and insulted managers and humiliated Syrian staff.

The rebels said the Turks do not see the Syrian side as equals: “We live at their mercy.”

Almost all supplies into rebel-controlled northern Syria, including deliveries of UN aid, go through the two crossings.

Rebel Assault on Besieged Abu Duhur Base in Idlib Province

The rebel coalition Jaish al-Fateh has launched an offensive on the regime’s isolated Abu Duhur Base in Idlib Province, with the possibility of a ground assault to overrun the complex.

Abu Duhur has long been out of use, as almost all of Idlib Province has fallen to the rebels. About 300 defenders remain.

The offensive started with shelling of the base on Sunday and ground attacks on the perimeter, especially at the southern gates. Syrian helicopters tried to drive away the attackers.

The assault resumed on Monday with artillery fire and ground attacks. The Syrian air force is again attempting to check the offensive.

A Jabhat al-Nusra video from Sunday promoting the offensive:

The Syrian military has launched an offensive in Latakia Province in western Syria, hoping to push back against rebels who have advanced through the northwest of the country this spring and summer.

Syrian troops and militia attacked near the Prophet Younis mountains on Sunday. The range overlooks the al-Ghab Plain in neighboring Hama Province, which has been the site of battles between the regime and rebels since the opposition advance in late April.

Pro-Assad outlets claim the regime forces took three hilltops, but local sources support the claims of opposition activists that the attacks were repelled.

Military analysts report that advanced Russian infantry fighting vehicles were supplied to Assad forces for the offensive, including a BTR-82A in this video: