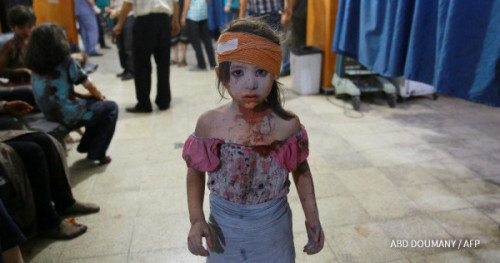 PHOTO: A wounded girl stands in a field hospital in Douma on Saturday (Adib Doumany/AFP)

The Assad regime carried out the second mass killing within a week in Douma, northeast of Syria’s capital Damascus, on Saturday.

Airstrikes and ground-to-ground missiles destroyed buildings in the town centre. Activists estimated that 35 to 50 people were killed. The Local Coordination Committees said it had verified 59 deaths in and near Damascus.

Videos and pictures showed men moving about in smoke to rescue the wounded and terrified and injured children awaiting treatment. Many of the victims — as in last Sunday’s bombing that killed at least 112 people and wounded more than 550 — were young.

Recovery of the body of an infant (Warning — Graphic):

The Syrian military has besieged and bombarded Douma for years, attempting to break rebels and the local population. The attacks have escalated this year as the rebel faction Jaish al-Islam, based in the suburb, has become increasingly prominent in the fight against the Assad regime.

Amid scores of civilian deaths this spring, Jaish al-Islam carried out rocket attacks on military targets in Damascus and threatened further retaliation if the bombing did not stop. The warnings brought only a short-term pause in the strikes, however. Hundreds more people have died this summer.

The Syrian air force has resumed its assault on Sunday morning. Five raids are reported on Harasta, where rebels have been attacking regime troops this week. Four barrel bombs have been dropped on Darayya, southwest of Damascus, where the opposition has made some gains this month.

Photos on social media are claiming further evidence of an Islamic State chemical attack on rebels and civilians in northern Aleppo Province.

Images showed patients with breathing difficulty and blistered skin following the incident in the town of Mare’, near the Turkish border:

Medical staff said on Friday that they treated victims with shortness of breath, coughing redness of the eyes and face, and itching skin. The Syrian American Medical Society said it had treated more than 50 people, including more than 30 with skin blisters, including the use of mustard gas.

Opposition activists also said the chemical is likely to be mustard gas, with the director of a local medical center reporting that about 10 patients have been transferred to hospitals inside Turkey.

Reports say one of the victims later died.

Samples from soil and the shells used in the attack have been taken from the area for testing in Turkey.

Rebels and the Islamic State have been battling for months on the frontline close to Mare’.

“When missiles landed on the ground, an unbearable smell wafted through the air and caused eyes irritation and skin damage for the Peshmerga,” Qadir said. “Immediately after the attack, we realized that our Peshmerga soldiers health deteriorated because of the smell in the area.

On Friday, a US official claimed confirmation of the Islamic State’s used of “a class-one chemical agent” against Peshmerga forces earlier this month.

State news agency SANA claims 11 people have been killed and 60 wounded by rebel mortars that struck neighborhood in Damascus.

Five shells on Damascus Central Prison, in Adra northeast of the capital, killed 10 people and injured 50, according to a “Police Command source”.

Activists claim that the regime fired on the prison, killing visitors, to blame the deaths on rebel groups.

Regime is trying to pin it on rebels as it does with most of the mortar shells that land in #Damascus.

Other mortars landed in the al-Wafidin Camp, home to Syrians displaced from the Golan Heights in the 1967 Arab-Israeli War.

Rebels say they are firing at military targets in retaliation for the Assad regime’s bombardment of suburbs which has killed hundreds this year, including close to 200 in Douma in the past week.

A spokesman for Jaish al-Islam, the leading rebel faction in Damascus Province, said there was “no need to deny responsibility” for today’s attacks because the group always “warns civilians if they are behind” rocket launches.

Eldorar al-Shamia said 43 people from the west of the province were killed on Friday, with their names posted on the wall of village mosques. Others are still under interrogation.

Earlier in the week, a list of 31 executed victims was posted.

A protest in Kafranbel in northwest Syria chides the world for its lack of response to the August 2013 chemical attacks by the Assad regime that killed more than 1,400 people near Damascus:

See Syria Special: Remembering Assad’s Chemical Attacks — and Those Who Died — on August 21, 2013

A local translator of US-rebel talks is claiming that the Americans have put restrictions on the rebel offensive to take Daraa city, near the Jordanian border in southern Syria.

The translator, who has been reliable in the past, says three conditions have been set on the Southern Front rebel coalition: 1) it cannot move in the al-Mahata area of Daraa; 2) it cannot advance north to the key town of Sasa; 3) rebels cannot link up to units in the West Ghouta area near Damascus.

Daraa, where the uprising against the Assad regime began in March 2011, has been split between the rebels and Syrian military for years.

The translator did not give a reason for the restrictions, but other EA sources have said that the Americans fear a sudden collapse of Assad forces — and a “vacuum” in power — if the rebels advance through Daraa city and province.

This spring, reliable activists said the US had barred a rebel entry into Suweida Province in southeast Syria, fearing antagonism of the Druze community.

The Southern Front is reliant on support, including weapons, from an operations center in Jordan that includes US advisors.