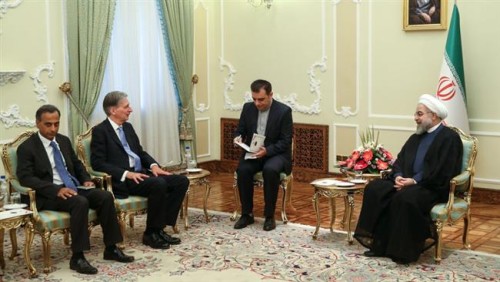 Hammond re-opened the British Embassy in Tehran, shut since it was stormed by a crowd in November 2011, on Sunday. He also met Foreign Minister Mohammad Javad Zarif and Oil Minister Bijan Namdar-Zanganeh.

The Rouhani Government has used the occasion, following the July 14 nuclear deal with the 5+1 Powers, to promote its foreign policy of “engagement” of the West as well as regional States. Zarif said at a joint press conference that Iran and Britain share interests in fighting “extremism”, the Islamic State, and drug trafficking:

Today, we entered the phase of mutual relationship based on mutual respect. We are ready to resolve problems through dialogue on issues we have differences, like human rights.

Iran will engage with all its neighbors….If we try to gain at the expense of others, all of us will lose.

The Government’s approach is being challenged by others within the regime, such as the Revolutionary Guards and critical MPs, who are wary of interaction with the US and its allies. Their position has been bolstered recently by the Supreme Leader’s attacks on Washington.

State news agency IRNA tries to deal with the criticism this morning by headlining, “Hammond: UK Stance is Independent of US“. The Foreign Secretary has also boosted the Government with the statement, “Iran is too large a player to simply leave in isolation.”

Hammond’s visit is also important for the Government’s strategy for economic recovery. State media highlighted that British businessmen, including executives of Royal Dutch Shell, were in the delegation.

The Foreign Secretary supported that hope with his declaration, after the meeting with the Oil Minister, that British companies are “more than willing” to invest once sanctions against the Islamic Republic are lifted.

The Iranian Embassy in London is also being re-opened, after London expelled Tehran’s diplomats followed the storming of the British Embassy.

Each country will be represented by a chargé d’affaires, but Hammond said he expected ambassadors to be exchanged within months.