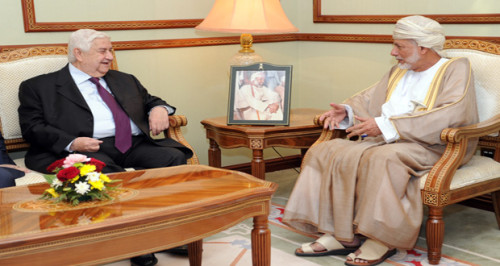 There were further steps on Thursday in an Iran-Russia initiative for high-level political talks over the 4 1/2-year Syria conflict.

Following discussions in Tehran with top Iranian and Russian officials, Syrian Foreign Minister Walid Moallem travelled to Oman, which has been a broker on negotiations such as the talks that led to an agreement on Iran’s nuclear program.

Syrian State news agency SANA declared, “The views of both sides converged that time has come for unifying constructive efforts to put an end to the crisis in Syria on the basis of fulfilling the aspirations of the Syrian people in combating terrorism, establishing security and stability, and maintaining Syria’s sovereignty and territorial integrity.”

Iranian leaders, including Foreign Minister Mohammad Javad Zarif and former President Hashemi Rafsanjani, put pressure on the US by blaming Washington for “extremism” and “terrorism” in the Middle East. The rhetoric indicated that Iran and Russia, essential backers of the Assad regime, will demand that the US end any support of Syria’s rebels — and press Saudi Arabia and Turkey to do likewise.

The Iran-Russia initiative apparently began in late June when Russian President Vladimir Putin hosted Deputy Crown Prince and Defence Minister Mohammed bin Salman in Moscow. No details were given of any discussions on Syria, but claims soon circulated that the Russians are trying to bring the Assad regime and the Saudis together. One report asserted some success with President Assad’s security advisor, Ali Mamlouk, visiting Saudi Arabia.

The contacts were stepped up last week when Russian Foreign Minister Sergei Lavrov spoke with US Secretary of State John Kerry and Saudi counterpart Adel Bin Ahmed Al-Jubair in Qatar. Lavrov indicated, after a second meeting on Wednesday with Kerry in Malaysia, that Russia and US had not closed their differences over the approach to Syria — however, Moscow was already pursuing the development of the initiative with Deputy Foreign Minister Mikhail Bogdanov’s trip to Tehran.

The Iranians took another step this week with the submission of a four-point plan to UN Secretary-General Ban Ki-Moon. No information was given about the content, but Iranian officials said it followed the lines of last year’s proposal by Foreign Minister Zarif for an immediate cease-fire; formation of a national unity government: constitutional protection for minorities; and supervised elections.

Publicly, the US was dismissive of Tehran’s efforts on Thursday:

"The Assad regime, frankly, is the root of all evil here," @StateDept's spox on #Syria & potential role for Iran in a peace process

The statement walked back President Obama’s comments, soon after the July 14 deal over Iran’s nuclear program:

We’re not going to solve the problems of Syria unless there’s buy-in from the Russians, the Iranians, the Turks, our Gulf partners….Iran is one of those players, and I think that it’s important for them to be part of that conversation.

An international summit in June 2012 put forth the Geneva Communiqué for a transitional government in Syria; however, subsequent attempts for a resolution have foundered on the issue of whether President Assad — and his inner circle, such as his brother Maher, commander of an elite military force — will give up power as their government is installed.

So far Syria’s opposition and rebels have made no comment on the Iran-Russia initiative.

Almost two years after the Assad regime’s chemical weapons attacks that killed up to 2,000 near Damascus, the UN Security Council has approved an enquiry to determine responsibility.

The rebel coalition Jaish al-Fateh is continuing its advance through the al-Ghab Plain in Hama Province, quelling a brief regime counter-attack and threatening a move on the Assad regime’s strongholds in Latakia Province on the Mediterranean.

Pro-Assad outlets admitted that rebels took “a large swath of territory” on Thursday, including the towns of Qarqur and Ziyadeh. Opposition fighters also moved back into the Zayzoun thermal power plant in nearby Idlib Province, after the regime counter-attack and aerial bombardment last week pushed back a rebel advance.

Fighting is now reported in the al-Ghab town of Sqaylabiyah.

Almost two weeks ago, rebels quickly took remaining regime positions in Idlib Province, including the town of Frikka on a key east-west highway, and moved further into the al-Ghab Plain. Elite Syrian forces, reportedly working with Iranian-backed militias, tried to fight back a few days later.