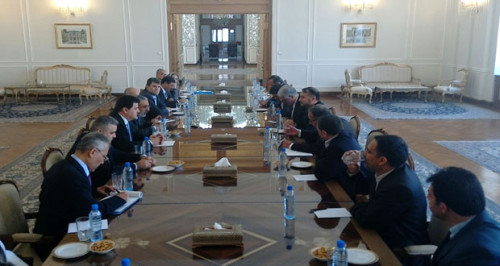 PHOTO: Syrian and Iranian delegations at a meeting last weekend in Damascus

Analysis: Supreme Leader Tries to Deal with Concern Over Syria and Iraq

Iran has displayed its continuing support for Syria’s Assad regime after the collapse of a Russian-Iranian initiative for high-level political talks.

Iran used the visit of a delegation from Damascus, led by Information Minister Omran al-Zoubi, for the show. Deputy Foreign Minister Hossein Amir-Abdollahian said on Saturday, “The Islamic Republic will continue its current strategy in Syria and will not change its strategy of fighting extremism and supporting Syria.”

Amir-Abdollahian referred to Foreign Minister Mohammad Javad Zarif’s trip through the Middle East and beyond last week — including a meeting with President Assad in Damascus on Wednesday — but he did not mention that Iran’s “peace initiative” was undermined as travelling.

Zarif — who was in Beirut talking to Hassan Nasrallah of Hezbollah, another vital ally for Assad — immediately cancelled his next stop in Turkey, which also backs the Syrian opposition and rebellion.

Syria’s Zoubi is in travel as the head of a delegation at the General Assembly of the Radio and TV Union of Islamic Countries.

“Supporting [our] neighbors, friends and allies is a priority in the foreign policy of the Islamic Republic of Iran,” Amir-Abdollahian said.

According to Iranian State media, Zoubi replied, “Syria is facing a Zionist plot and, regrettably, some of the countries in the region are going along with this conspiracy.”

Syrian State news agency SANA headlines the Sunday statement by the Supreme Leader’s top aide to the General Assembly that Syria is “the golden ring of the Axis of Resistance”.

According to SANA, Velayati said Damascus faced a “fierce terrorist war” because of its role, with more than 80 countries in the conspiracy. However, “they failed thanks to the resilience of the Syrian people and wisdom of their leadership”.

No details were given, with Zarif promoting the July 14 nuclear deal and declaring, “Iran and Russia have mutual relations in sensitive regions.”

Lavrov said that “Moscow is keen to cooperate with Tehran in settling Middle East and north of Africa issues, aimed at benefiting the regional nations”.