Turkey Feature: Iraq’s Kurdish Leader Barzani — We Did Not Back Ankara’s Airstrikes on PKK 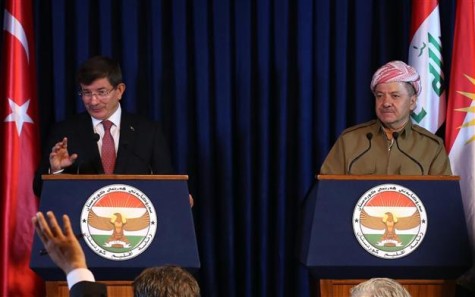 Prime Minister Ahmet Davutoğlu told journalists on Saturday that Barzani had endorsed the operation during a one-hour phone discussion about both the airstrikes in Iraq and those inside Syria against the Islamic State:

Mr. Barzani expressed his solidarity with Turkey again, noting that Turkey’s operations against ISIL and the PKK are both justified….[He was] contribute to all kinds of cooperation in the fight against terrorism.

However, Barzani’s office released a statement after Davutoğlu’s speech, asserting that the Kurdish leader “expressed his displeasure with the dangerous level the situation has reached.”

“He requested that the issue not be escalated to that level because peace is the only way to solve problems and years of negotiations are better than one hour of war,” the statement continued.

Turkey’s two-pronged attack on the Islamic State and the PKK followed days of escalating violence in Syria. On Wednesday, the Kurdish group shot dead two policeman in southeastern Turkey, claiming they were linked to the Islamic State. Two days earlier, an IS suicide bomb killed 32 young activists and wounded more than 100 in Suruc, across the border from the Syrian Kurdish center of Kobane.

The Turkish Government and the PKK have been involved in negotiations since 2013 for an end to the conflict which has lasted more than three decades. The PKK declared a ceasefire and began slowly withdrawing its fighters to Iraqi Kurdistan.

The PKK’s military wing, the People’s Defence Forces (HPG), indicated on Saturday that the “solution process” is now suspended as it denounced an “aggression of war” and the “most serious military and political error” and vowed “resistance”.

“The conditions for maintaining the ceasefire…have been eliminated,” the HPG declared.